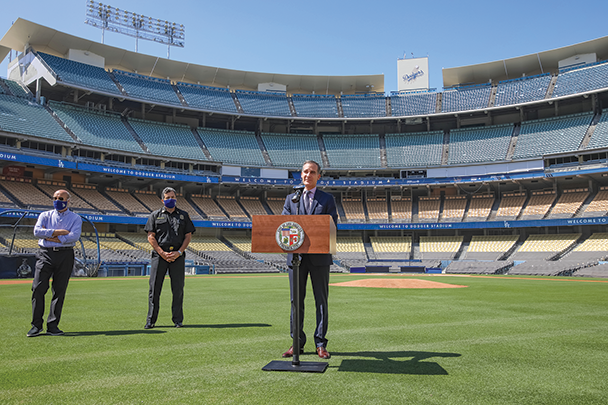 “Dodger Stadium is a place where Angelenos usually rally around a common goal of victories on the field, and [now], it is uniting us around a mission to save lives,” Garcetti said. “We will continue to grow our testing capacity, so we have the data and tools to get ahead of outbreaks, stop the spread of this virus and inform our next steps toward getting businesses back online, workers back on the job and people back to their lives.”

The new site will be the 36th in Los Angeles County. To mark the milestone, Garcetti was joined on the field at Dodger Stadium by partners who helped make the testing site possible. Partners include the Los Angeles Dodgers, which contributed the space in the stadium parking lot; Community Organized Response Effort, which is dedicating 60 staff members to operate the site; Live Nation and Red Rock Entertainment, which are donating Jumbotron screens to show videos that will help guide guests through the process; and the Los Angeles Fire Department, which will oversee testing site logistics.

“The Dodgers have and always will be a resource for the community, and we’re proud to partner with Mayor Garcetti, LAFD and CORE on this important initiative,” Dodger President and CEO Stan Kasten said. “Dodger Stadium has hosted its share of memorable and historic events, but this could be one of the most significant, as it will help reopen Los Angeles and ultimately save lives.”

The city began its free public COVID-19 testing on March 20 and 40 days later, Los Angeles became the first major city in the United States to offer wide-scale testing to all residents, with or without symptoms, Garcetti said. The sites countywide are facilitating the testing of approximately 15,000 people per day, with over 450,000 having already been tested.