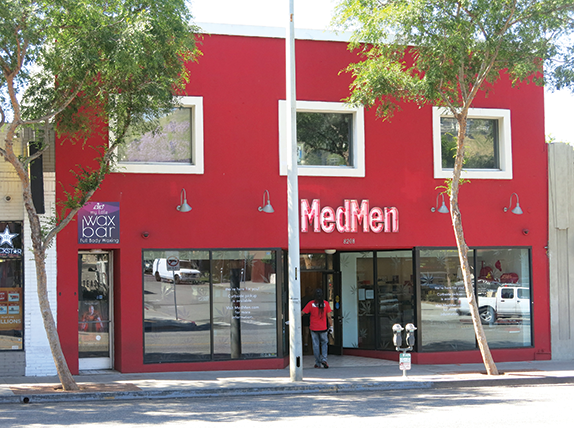 MedMen West Hollywood is one of the largest supporters of a ballot initiative that would give recreational cannabis licenses to the city’s existing dispensaries, among other changes. (photo by Cameron Kiszla)

Big changes may be coming to the rules regarding West Hollywood’s cannabis businesses over the next month.

On May 4, the West Hollywood City Council considered the Close the Loopholes ballot initiative, which has garnered enough signatures to appear on the November ballot. The initiative would change West Hollywood’s cannabis ordinance to combine adult-use and medicinal retail licenses, allow edible-only consumption lounges to offer consumption of smoking and vaping products, and other changes.

Several council members expressed concern about the methods and motivations of supporters of Close the Loopholes.

According to its website, closetheloopholes.com, the initiative is backed by West Hollywood Residents and Businesses for Fairness, which is a coalition of cannabis businesses, United Food and Commercial Workers International Union Local 770 and concerned residents.

The initiative’s major funding comes from MedMen West Hollywood – one of the “WeHo Originals,” four dispensaries that have been operating on temporary adult-use retail licenses but were not awarded permanent licenses in the city’s selection process – as well as Alex Kardos and UFCW Local 770, the website said. Kardos is founder and partner of Where Eagles Fly, which was awarded a permit for an as-yet-unopened edible-only consumption lounge called the Fantom Flower. UFCW Local 770 represents cannabis retail workers.

“They’re upset about the fact that they didn’t get those licenses. This initiative was brought forward by people who were not successful in getting the kinds of licenses they want,” Councilman John Heilman said.

Mayor Pro Tempore Lindsey Horvath added that she was approached by the initiative’s petition seekers, who she said were “aggressive with misinformation” in seeking signatures.

“I advised them that the information they were sharing was not accurate. They said it anyway and they were, like I said, quite aggressive with people … We also received complaints about signature gatherers participating in this activity while the COVID emergency was underway. People were concerned and scared, quite frankly, by people participating,” Horvath said.

Per Horvath’s request, the June 1 report will also examine the legality of the Close the Loopholes’ supporters’ methods.

“I think it would be helpful for us to know what types of tactics are allowed and whether there are any consequences for those tactics being used,” Horvath said.

In contrast, the supporters of another competing petition, the West Hollywood Cannabis License Integrity Initiative, stopped seeking signatures once the coronavirus pandemic began in March, said Scott Schmidt, executive director of the Adult Use Retailers Association of West Hollywood, in a letter to the City Council. AURA, a collection of the businesses who were awarded adult-use recreational permits by the city, supports the West Hollywood Cannabis License Integrity Initiative.

Kian Kaeni, a spokesman for the Close the Loopholes initiative, denied the criticisms and said AURA “decided to turn their frustration of not being able to gather enough signatures for their initiative into accusations that just are not true.” Kaeni added that “the vast majority of our efforts was prior to any social-distancing measures put in place.”

“We completed signature gathering in public on [March 19], the same day the order went into effect at 11:59 p.m,” Kaeni said in an email. “Meanwhile, while AURA sits on the sidelines trying to shutter our businesses, this pandemic has come at great hardship for our operators and their employees. Still, we have remained good community partners and citizens, adhering to the county health order and ensuring protections and safety for both workers and customers.”

After a request by Councilwoman Lauren Meister, the council will also consider whether to place the West Hollywood Cannabis License Integrity Initiative on the ballot as well.

John Leonard, the city’s community and legislative affairs manager, suggested June 1 would also be an appropriate time for city staff to provide information beyond the scope of the two ballot initiatives.

“We haven’t presented a cannabis update in a number of months, so we can provide that as part of this so that the council has the full information on the cannabis landscape at this point,” Leonard said.

Councilman John Duran expressed concern that the update would take multiple hours, as such meetings have in the past.

“We have so many pressing issues to deal with in the middle of a pandemic. We’ll give it its just due, but we have other stuff to do, too,” Duran said.

Duran’s sentiment echoed that of Heilman, who worried that, during the pandemic, West Hollywood voters are focused on “much more important things.”

“We, as a council, should be more focused on those important things as well,” he added.

Heilman expressed hope that the city and the supporters of the two competing initiatives could use the time before June 1 to come to an agreement regarding the city’s cannabis rules.

“I think everything has changed as a result of the current crisis, and maybe there is an opportunity within the next month for us to come up with some kind of compromise. I hope that in the next 30 days, we’re exploring those options with all of the parties to see if there is a way to resolve this … If we can do something in the next 30 days, that’s great, if not, we’re likely going to have to put this on the ballot,” he said.

Kaeni said the Close the Loopholes supporters hope a compromise can be reached.

“We have been requesting an opportunity for compromise for months, and we stand ready to abandon our initiative if we can agree on a reasonable solution,” Kaeni said.