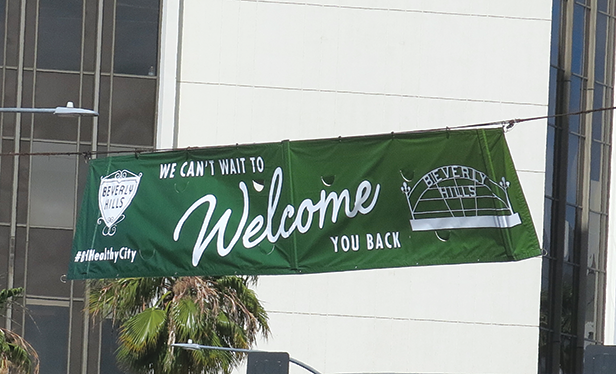 Retail business owners and operators say they’ve been preparing their stores for reopening, which Los Angeles County allowed on May 26. (photo by Cameron Kiszla)

The Beverly Hills City Council again convened the subcommittees of its COVID-19 Business Recovery Assistance Task Force. The task force members on both subcommittees – Retail and Property, which met on May 20, and Tourism, Hospitality and Restaurants, which met on May 22 – attempted to pressure the council members to be more aggressive in pushing the county and state to loosen restrictions on businesses.

That request was partially granted with the May 26 announcement that Los Angeles County would allow retail stores, faith-based services, drive-in movies and more to operate in limited capacities. County officials reportedly plan to ask the state for permission to reopen restaurants and hair salons as well.

With reopening mostly out of the city’s control, the task force members also directly addressed what Councilman Julian Gold described as “the reason for this task force.”

“When we can open for business … what are the things the city can do to make each of you successful? That’s really what we’re supposed to be talking about. The frustrations with the state and all the rest, we obviously have to deal with that, but the practical question in front of us today is, can we come up with a series of tangible suggestions to put in front of the council that the council can consider, things that will help your business be successful?” Gold said.

In the Retail and Property Subcommittee, the business owners discussed the safety measures they are preparing for once retail sales resumed. For instance, Tom Blumenthal, CEO and president of Gearys of Beverly Hills, said his business hired Servpro, which handles cleanup after disasters like floods and fires, to clean the store, and Gearys has prepared a video to advertise “that our stores are going to be safe, showing the process that we went through to keep the store safe.”

“It’s up to the client at the end of the day. It’s up to them if they feel safe coming out. If they’re vulnerable, maybe they should stay home, but I think we should be open and ready to serve our customers that feel safe to come out,” Blumenthal said.

Kathy Gohari, director of client engagement on the West Coast for Valentino and former president of the Rodeo Drive Committee, said her business has met a list of requirements and guidelines – such as masks for employees, extra space for social distancing and disinfecting – from the Centers of Disease Control and Prevention. Gohari added that the corporate offices of many Rodeo Drive retailers are working to create safety plans of their own.

“Obviously for them, it’s not just the public who’s coming in, but employee safety that they care about,” Gohari said.

Vice Mayor Robert Wunderlich suggested that the city’s guidelines for reopening procedures, which are expected to be part of the city’s marketing strategy of positioning Beverly Hills as a safe place for people to visit, could take into account those corporate and government guidelines.

“We could consolidate them and try to come up … with an aggregate set of protocols from the ones that people have already developed in their own companies. That could help move this forward,” Wunderlich said.

In the Tourism, Hospitality and Restaurants Subcommittee, safety was also a concern, and many of those businesses are also relying on guidelines from the CDC and other government agencies, said Sandy Murphy, general manager of the Beverly Hilton.

“Each of us have our own list of safety precautions that we’re doing. We’re doing everything that the CDC has requested. We’re looking at the county and state guidelines to make sure that we’re keeping the guests as safe as possible … It’s been devastating for us and our employees, and whatever we can do to move that forward, sooner rather than later, is obviously very important to us,” Murphy said.

Some of the ideas presented to the task force, such as automatic renewal for outdoor dining permits, are helpful, the task force members said, but the restaurateurs said setting aside streets – Canon Drive was named as a possibility – or at least street lanes and sidewalks would help all restaurants, not just those with rooftops and patios.

“The real issue is that, sure, people will want to come into your restaurant and dine, but some people are not going to feel comfortable in an enclosed space. We’re trying to provide the opportunity – particularly for the restaurants that will never be able to meet their business model if they have to keep 6 feet apart … we have to make it work for everybody,” Lazaroff said.

The task force members also made clear that, once closed to cars, the streets would need some additional decorations, such as lights for the trees and greenery.

“People are not going to want to just eat on a driveway or in the street without some sort of ambiance,” Councilwoman Lili Bosse said.

Gold asked city staff to move quickly on what the task force discussed and bring it back to the council soon.

“I’m concerned that if we don’t meet again for another week, we’re going to lose time … If there’s some way we could sort of begin that process so we’re ahead of the curve, that would be great,” Gold said.

Gold and Bosse asked the Tourism, Hospitality and Restaurants Subcommittee members to come up with more ideas to help their businesses, many of which will not be allowed to reopen until the state approves the county’s request. The council members also made clear that they would do their utmost to help the businesses in Beverly Hills.