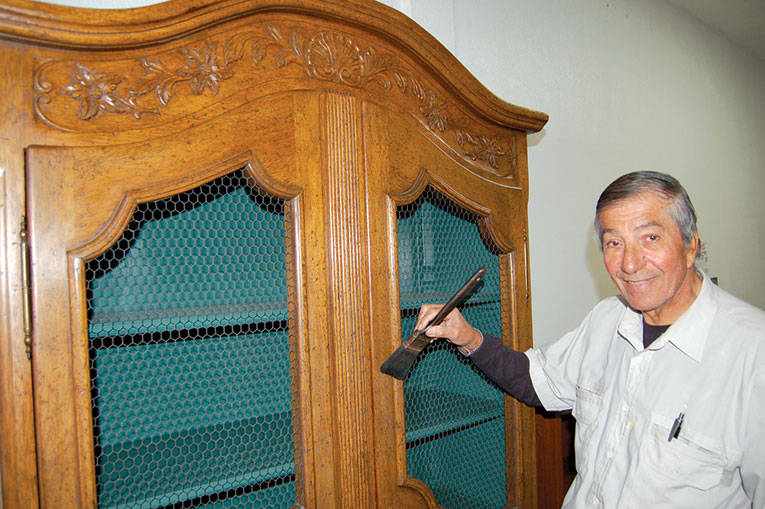 Tony Brienza had a talent of turning “trash into treasure” by refurbishing pieces destined for the furniture graveyard. (photo by Edwin Folven)

Tony Brienza, the longtime owner of local furniture repair business House of Brienza, died on April 30 of natural causes at the age of 88.

Brienza was well-known for refinishing pieces that many people thought were unsalvageable. He had a passion for craftsmanship and hand-made furniture from earlier eras when materials were often assembled with more durability and better withstood the test of time. Brienza specialized in re-caning and re-weaving wicker chairs.

“We don’t just refinish them, we specialize in restoring the pieces to their original beauty,” Brienza said in a 2013 interview with the Park Labrea News/Beverly Press. “What I tell people is not to throw it away, because it can be restored.”

Brienza grew up in New York and moved to Hollywood in the early 1960s. He established House of Brienza in 1964 on Melrose Avenue, and the business moved several times over the years. It was last located at 2358 S. Robertson Blvd. until Brienza retired in 2015.

“My dad was so funny and vivacious, a real character,” she said. “He was really kind, he had a big heart, he was very loving. He was also so witty and had such a huge sense of humor.”

Brienza’s clients included people from all walks of life, even celebrities, and he treated them all the same, which was a key to his success, Brienza-Tagliente said.

He refurbished furniture for the owners of the Original Farmers Market, who commissioned him to restore pieces from the Gilmore Adobe. Brienza-Tagliente also recounted an experience as a child when she tagged along with her father to a recording studio. The band Chicago was there and recorded the hit “If You Leave Me Now” while Brienza refinished furniture.

“That is something I will always remember,” she said. “He had many famous directors, producers and actors as clients, but never really talked about them. It was about his craft.”

Brienza was living in a care facility in Ventura at the time of his death. No formal services were held, but a celebration of his life is planned in the future when COVID-19 public health restrictions are lifted, Brienza-Tagliente said.

“Over the last three months, I am so lucky to have been able to spend time with my dad,” she added. “He was so loving. I will always have those great memories of him.”

Brienza was preceded in death by his first wife, Mary, and is survived by their children, Louise, Rosemary and Dolores. He is also survived by his second wife, Carmella, and their children, Ida, Anthony Jr. and Carmella Jr., as well as his third wife, Lenore, and step-daughters, Stephanie and Kimberly.