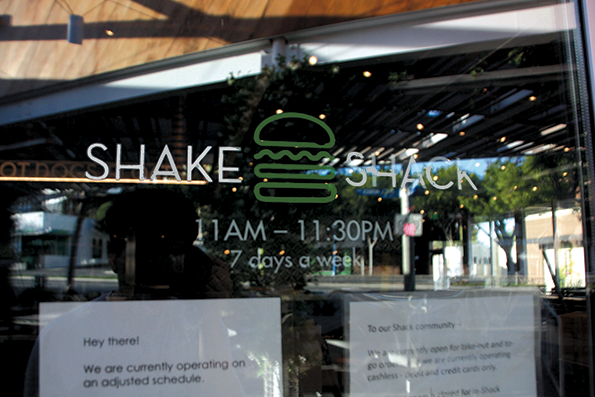 The Shake Shack on Santa Monica Boulevard is one of many restaurants waiting to serve clients in-house. (photo by Jose Herrera)

West Hollywood Mayor John D’Amico invited California State Assemblyman Richard Bloom (D-Santa Monica) to join the City Council on May 4 in a virtual meeting to continue candid discussions about the impacts COVID-19 has had at the state level.

Bloom began by advising incoming Mayor Lindsey Horvath and  Mayor Pro Tempore John Heilman, who will be installed in their new positions on May 18, that they will have their hands full dealing with the economic downturn caused by coronavirus.

“You’re both veterans of the City Council, and I know that the entire council will join in helping to get through what will be, at every level of government, a struggle over the coming months,” Bloom said.

Bloom, who represents the 50th District including West Hollywood, said the budgets of cities on the Westside, and state and federal budgets, are in a state of calamity, but during challenging times, it’s important to rise to the occasion.

In Sacramento, the California Legislature returned to session on Monday after a temporary hiatus due to COVID-19. The situation at the state level of government will be bleak, both on the legislative and budget front, he said.

“We’ve been encouraged to cut back on our bill packages that we just began a few short months ago,” Bloom said. “Only essential bills will be moving through the legislation session this year.”

Early in the year, Bloom was working on 25 bills that were later cut down to nine. The California Legislature will focus on passing bills that address immediate issues such as the COVID-crisis, wildfires, homelessness and housing. 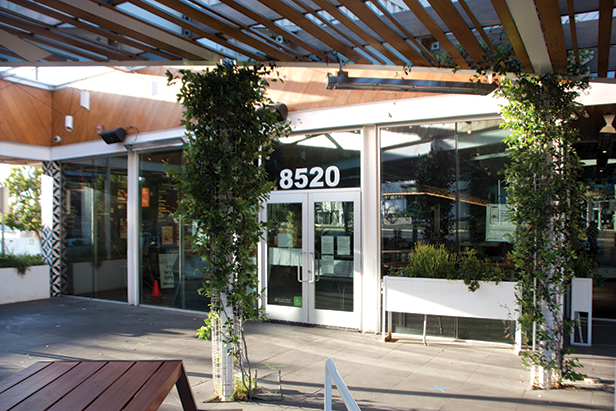 Shake Shack located at 8520 Santa Monica Blvd. is one of many restaurants waiting for “Safer at Home” orders to be lifted to welcome patrons inside its business. (photo by Jose Herrera)

Similar to circumstances affecting the West Hollywood budget, the state budget faces diminishing funds from sales tax and all other revenue sources.

“As a result of that, we are facing a $40 to $60 billion budget deficit,” Bloom said. “We are fortunate that in the last six years we have established a budget surplus cash reserve of $21 billion. But that is going to disappear really quickly, though it will help cushion the blow.”

However, Bloom wanted to reassure folks that while the current state of the economy and life may be difficult, the state government is working on supporting those in need. One way is applying for unemployment benefits through California’s Employment Development Department.

Councilwoman Lauren Meister interjected that it’s difficult to go through the process and get help because applicants cannot get EDD staff on the phone.

“I understand that there are hundreds of thousands of calls happening, but the message is disheartening because it’s just, ‘here’s another number for you to call,’” Meister said. “Then you call the other number and it’s the same message, ‘We are going to give you some information and you’re on your own and we are going to hang up on you.’”

Bloom agreed the situation is frustrating and the No. 1 issue has been responding to folks who have not been able to get any or all of their EDD benefits.

Prior to the health crisis, the economy was good, unemployment was low and the state was enduring a low period of unemployment. EDD staff numbers reflected that reality. However, in the first four weeks of the “Safer at Home” order, the EDD had to process 2.7 million applications.

Additionally, there has been confusion about which form, the unemployment insurance or PUA, Californians should complete to obtain benefits.

Meister and Horvath also questioned Bloom about when and how the state of California could support sectors of the economy such as the hospitality and tourism industry.

Bloom said the domestic tourism economy will probably return first, then international tourists. But in either case, people who are thinking about visiting anywhere in the world want to feel safe.

“I think we need to put our heads together on a subregional basis. This is a problem you share with Santa Monica and Beverly Hills and with the city of Los Angeles because it is the main driver of all of our economies,” Bloom said.

Meister said that she hopes Sacramento thinks realistically about how small businesses and venues such as bars can be brought back, and when it’s going to be safe to do so, knowing that there could possibly be a second wave of COVID-19 this fall.

Can’t get groceries? Order a Zoomer