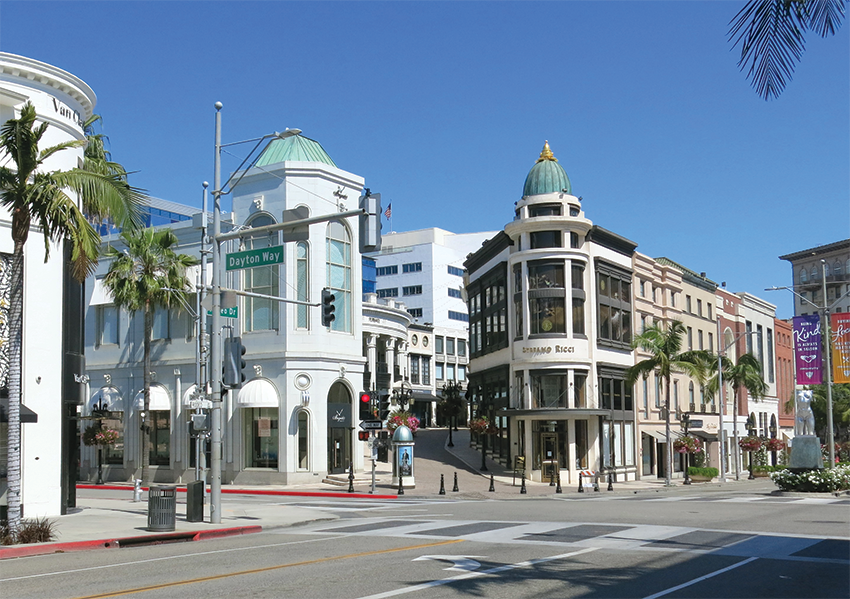 The Beverly Hills City Council is seeking to help commercial tenants who are struggling to pay rent, including retail businesses. (photo by Cameron Kiszla)

In its study and formal sessions on May 19, the Beverly Hills City Council considered a variety of topics related to the ongoing coronavirus pandemic and its effect on the health and economic safety of Beverly Hills.

The council considered making changes to the city’s eviction protections for commercial tenants, but due to the complexity of commercial leases – they can be dozens of pages long – and the effects of the coronavirus on different types of commercial buildings, the council decided to have City Attorney Laurence Wiener spend more time crafting a draft ordinance to be considered on June 2.

Several council members worried that some commercial tenants who could afford to pay their rent are abusing the city’s protections and instead using the ordinance as a free loan.

“We have shifted the playing field that is uneven now towards the tenant, and we’ve seen that some tenants are taking advantage of it. I think what we really want to do is level the playing field so people really do have to come together to work out a settlement, but right now, we’ve gone overboard and created a situation that’s untenable at this point in time,” Mayor Lester Friedman said.

The council members agreed that retail, restaurant and office spaces should be separated into their own categories so they could be governed by different rules, as each type of business is likely to be affected differently by the COVID-19 crisis. However, the council was unable to come to an agreement on which rules would be best for each type of tenant.

Council members also worried that, if the city’s ordinance were to be written too restrictively, the council would have to return to amend it as state and county guidance allows more and more freedom for businesses.

On May 13, the Los Angeles County Department of Public Health announced that all retailers could reopen for curbside pick-up and delivery business as long as they were not located in an indoor mall or shopping center.

That order came only a few days after Gov. Gavin Newsom announced that stores selling clothing, sporting goods, toys, books, music and flowers were allowed to do so.

Council members were also concerned about the city’s role in settling disputes between landlords and tenants.

“We’re going to be going down a rabbit hole if we get involved in commercial disputes. I think that is way too complicated for us,” Friedman said.

The council agreed that the city should serve as a backstop of last resort in such disagreements, but debated how the city should verify that the tenants and landlords have had good-faith discussions on rent payment.

After nearly two hours of discussion on the topic, the council decided that Wiener would work with two council members in an ad hoc committee to come up with a draft ordinance that is likely to be considered on June 2.

“I don’t think we want to rush this tonight at all. I think there’s more work to do, but I think I heard everybody say that we want to simplify this. I don’t think that we’re ready today or tonight to do it. That would feel too rushed, and I think we need to work this through a bit more,” Councilwoman Lili Bosse said.

The council also received an update from the city’s COVID-19 Business Recovery Assistance Task Force subcommittees, which met earlier in the month, and provided direction on some of the suggestions that came out of those meetings.

Laura Biery, marketing and economic sustainability manager for the city, advised the council that city staff is already at work on some suggestions from the task force, such as revising the city’s outdoor dining policy, putting together a marketing campaign for city businesses and promoting the city’s safety measures, and increasing pedestrian access in a safe manner, among other ideas.

The council also approved a suggestion from the task force to delay transient occupancy tax payments for hotels in the city. In the task force meetings, several hotel representatives said the tax payments would be very burdensome due to cash-flow issues caused by the pandemic.

“I think it’s a way that the city can help the hotels get through this,” Friedman said.

The council also agreed that city staff should research potential safety protocol mandates, relaxing signage regulations in the city and expediting the permit process for coronavirus-related improvements to businesses.

“We should be establishing an extensive set of best practices in anything where we’re hoping to attract people so they can feel safe, and not only feel safe but actually be safe,” Mirisch said.

The council members, while expressing support for relaxing the city’s signage guidelines during the pandemic, also made clear that they didn’t want to see the city’s aesthetic change too drastically.

“I think we should work to accommodate businesses, but I don’t think we can or should accept an ‘anything goes’ attitude,” Mirisch said.

The council members also said that, by expediting safety improvements related to COVID-19, the city would be helping businesses when they need it the most.

“We should not be a hindrance to the recovery. We should be doing what we can do to speed up the recovery,” Vice Mayor Robert Wunderlich said.

One item that was not approved, however, was a proposed cap on the amount delivery services like Grubhub and Uber Eats can charge.

“These companies typically charge between 5% and 30%,” Biery said.

While there was broad support for a cap on the council, several council members worried that, by limiting how much the tech companies can charge businesses, those costs would be passed on to the customer.

“It doesn’t do us any good if we cap one charge and the other one goes up,” Councilman Julian Gold said.

“I would support it, but I think we need to monitor the potential impacts,” Mirisch added.

Bosse also worried that the cap might encourage the delivery companies to refuse to work with Beverly Hills businesses, causing a potential backfire, though she noted that owners and representatives of area restaurants asked for the cap during the task force meetings and other cities, such as New York City and San Francisco, have put 15% caps in place. A 15% cap has also been proposed in Los Angeles by City Councilman Mitch O’Farrell, 13th District.

“I hope it doesn’t backfire, that by putting in a cap, it doesn’t mean that these delivery services won’t work with restaurants and we’re cutting off our nose to spite our face,” Bosse said.

Friedman, however, argued that the city needs to move “sooner rather than later” on the cap.

“We’re in the heart of the time now where our restaurants need to survive,” Friedman said.

City staff will return to the council on June 2 with a proposed cap of 15% of the actual food cost, as well as other options for council consideration.

After requests from Mirisch and Wunderlich, city staff will also bring ideas for parklets and pedestrian- and bicycle-friendly streets for consideration by the task force subcommittees, as both ideas have been implemented in other cities to allow businesses to serve more customers while practicing social distancing.

The ideas did not seem to gain much traction during earlier task force meetings, Biery said, but the council members agreed that if the ideas were more fleshed out, they’re likely to be discussed more seriously.

“I think if we develop it properly, I think we’ll get support for it,” Gold said.

The council also approved the inaugural members of the city’s Rent Stabilization Commission, which will settle disputes between landlords and tenants.

Milkowski was also chosen by the council to serve as the commission’s first chair, and the commission will choose its vice chair.

Which commissioners will serve two-year terms and which will serve for four years will be decided at random, the council members agreed.

“I don’t feel that we should hand-pick. I think it should be random and luck-of-the-draw in that situation,” Bosse said.

The council declined to close the city’s parks for Memorial Day weekend, opting instead to increase the presence of law enforcement, Park Rangers and members of the Ambassador Team to ensure visitors to the park wear masks and practice social distancing.

“Police need to take it more seriously and do a better job of actually enforcing it,” Mirsich said.