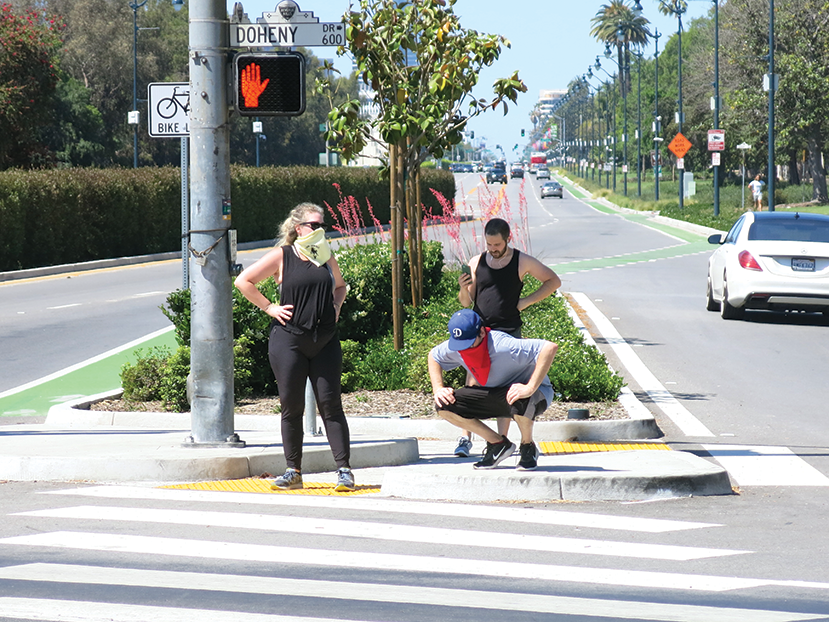 Councilman John Mirisch said he sees some Beverly Hills residents not wearing masks in public, despite the city’s requirement to do so. (photo by Cameron Kiszla)

Last week, with many businesses closed or operating only for takeout, curbside pick-up and delivery, multiple members of the Beverly Hills COVID-19 Business Recovery Assistance Task Force expressed their frustration with the regulations put in place by the state and county.

“[Reopening] is imperative. The hotels are in dire straits. I can’t stress enough how critical this is, and we need to do it now. This is not an option; this is a must-do,” said Offer Nissenbaum, managing director of the Peninsula Beverly Hills.

According to the county, faith-based groups are limited to 25% of their building’s capacity or 100 people, whichever is lower, and retail – including those in malls and shopping centers – can allow in-person shopping at 50% of the normal capacity of the business. The rules for restaurants will depend on whether the state approves the county’s “variance” application, which, if approved, would also allow barbershops and hair salons to resume operations.

“We are pleased the county has moved into this next phase of recovery. Our retail community is ready to open safely while adhering to all county protocols, and we are here to support them during this unprecedented time,” Mayor Lester Friedman said in a statement. “We look forward to timely updates from the county on the reopening of indoor dining and personal care establishments.”

Many of the Beverly Hills business owners’ concerns were voiced during the public comment portion of a May 22 special City Council meeting, during which the council voted 4-1 to send a letter to Gov. Gavin Newsom asking for restrictions on businesses to be lifted by June 1.

Councilman John Mirisch was the lone vote against the proposal. Mirisch said he empathized with the business owners, but he thought the city was ignoring medical advice and pushing to reopen before it was safe.

While business owners claimed they had met all of the criteria from the Centers for Disease Control and Prevention and other government agencies on reopening safely and stressed the city’s success in slowing the spread of the virus, not everyone is being safe, Mirisch said. He noted that he frequently sees people in Beverly Hills who are not practicing social distancing and not covering their face, despite the city ordinance that requires masks in public.

“I have to say, it’s so disappointing to not only see the incidents with my own eyes, but to get so many reports from people when we’re not enforcing [the rules]. How about we start with that before saying we’ve done anything successfully, because in my opinion, we haven’t,” Mirisch said.

While council members agreed with Mirisch that more enforcement of the mask ordinance may be necessary – “I think we’ve not enforced well, and I think enforcement is important as we move forward,” Councilman Julian Gold said – the other four council members said they were taking health into consideration when supporting the push to reopen businesses.

“We’ve learned better how to deal with the virus … We have to come to live in the world in which we’re living with the virus,” Vice Mayor Robert Wunderlich said.

Wunderlich added that once the city’s safety protocols were developed, businesses would need to ensure their stores stay safe.

“It would be incumbent on the city to ensure those protocols are followed and that there are teeth in the enforcement. If stores aren’t following the protocols, they’ll get shut down,” Wunderlich said.

Councilwoman Lili Bossed said that while health and safety is considered “first and foremost in every decision we’ve ever made,” reopening businesses was the most beneficial step for everyone in Beverly Hills.

“Now is the time, as we’re in a historic moment, that we be bold yet again and do what’s best for our community,” Bosse said.

Los Angeles plans to clamp down on PPE litter