Beverly Hills works to get back to business 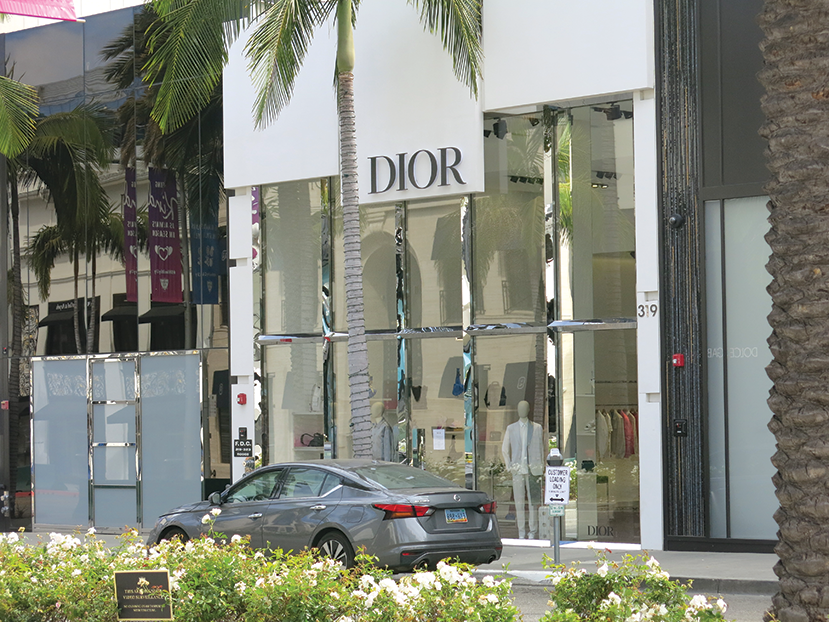 Beverly Hills has set up pick-up zones for retail businesses that have been allowed to reopen for curbside service only. (photo by Cameron Kiszla)

Last week, the Beverly Hills City Council convened the subcommittees of its COVID-19 Business Recovery Assistance Task Force to talk about ways the city and local business owners can come together to help the local economy recover in a safe way.

In the Tourism/Hospitality/Rest­aurants subcommittee meeting, much of the discussion concerned how restaurants and hotels can safely begin operating once they are allowed to do so by the state and county. On May 12, Gov. Gavin Newsom announced that restaurants can reopen for dine-in service once their counties have contained the spread of COVID-19 and they allow for social distancing and enhanced cleaning, though Los Angeles County had not yet met the state’s standards to allow restaurants to reopen.

“Ultimately, what we’re really hoping for from today is to get recommendations that we can bring forward to the full council, so that …  as soon as we’re allowed by L.A. County to open up, we’re ready so you can open up right away,” Bosse said.

With the timing and details of the reopening process yet to be fleshed out, the task force and council members discussed ways for restaurants to resume operations while keeping customers and employees safe.

“First and foremost, we have to really work hard on reopening. When you reopen, you have to find a balance between safety and sanitation and people’s welfare and health,” said Offer Nissenbaum, managing director of the Peninsula Beverly Hills.

Though the exact percentage has yet to be decided, restaurants are likely to reopen at only partial capacity so tables and chairs can be spread out and customers won’t be too close to each other, helping them feel comfortable enough to dine out.

“Little by little, we will be able to regain the confidence from the diners,” restaurateur Giacomino Drago said.

However, that will also limit how much business the restaurants can do, so some task force members proposed adding outdoor dining spaces – including expanding rooftop dining – when possible.

“There is going to be a sense of more comfort of sitting outside because people won’t feel trapped in,” said Todd Johnson, president and CEO of the Beverly Hills Chamber of Commerce.

“I believe this is what’s socially responsible for the staff, for the rest of the public, to make them feel more confident,” said Barbara Lazaroff, of Spago and other Wolfgang Puck Fine Dining Group restaurants.

The subcommittee also encouraged Bosse and Gold to push back against food delivery services like DoorDash and Postmates, which several restaurateurs claimed are taking too big a cut of orders placed through their apps. Bosse and Gold said they would ask City Attorney Laurence Wiener to look into what the city could do. In Los Angeles, a motion by City Councilman Mitch O’Farrell, 13th District, would cap the fees paid to delivery services at 15% of an order.

“We as a group, unfortunately, because we’re not together, we don’t have any power against these delivery services,” said Peter Garland, owner of Porta Via. “If the city were to limit this at 15%, it would certainly be a more beneficial model for restaurants, that’s for sure.” 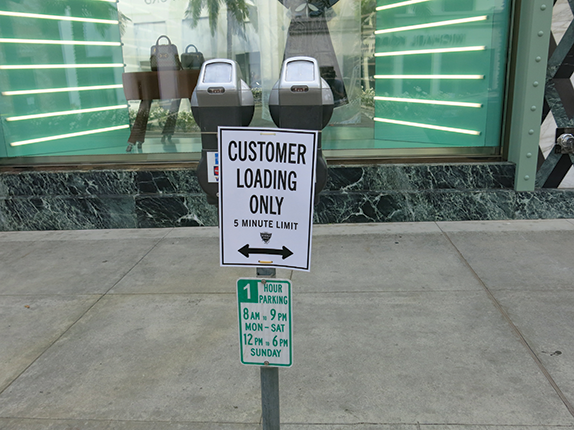 The curbside pick-up zones in Beverly Hills replace some of the metered parking on Rodeo and Beverly drives. (photo by Cameron Kiszla)

In the Retail/Property subcommittee, city staff advised the task force members about the city’s efforts to create curbside pick-up zones for retail businesses that have been allowed to reopen. Business owners who would like the city to set up one of the free customer loading zones can email businessrecovery@beverlyhills.org.

Task force members were also concerned with enhancing safety in the city so that customers will feel safe to patronize businesses. The task force members suggested the city could reach out to Cedars-Sinai Medical Center and other area hospitals to work with experts to develop best practices, then certify businesses that comply.

Russell Goldsmith, chairman of City National Bank and RBC Wealth Management in the U.S., said if Cedars-Sinai helped develop the city’s guidelines, it would “help give credibility” to the rules, adding to consumer confidence.

“People want to come to Beverly Hills, as everybody in this call knows, but if they felt like, ‘Gee, Beverly Hills is kind of the gold standard. It’s small enough, it’s smart enough, it’s rich enough to enforce and to have safety, so wherever I go, it will be safe,’ [that would be helpful],” Goldsmith said.

“We can use the brand of the city to be helpful,” Wunderlich said.

The Beverly Hills Chamber of Commerce also plans to help businesses get back on their feet by putting together a checklist of what businesses need to do to reopen, Johnson said.

“We will put together as much on this list as relates to all business as we can, and we’ll get it out. I think that will be helpful to everyone,” Johnson said.

The chamber has also started a Back to Business campaign, providing small businesses with access to the chamber’s resources, such as networking events, seminars and voting rights on its Government Affairs Committee.

The task force also wanted to rethink the use of city streets by allowing for parklets or outdoor dining areas to help businesses while car traffic is reduced, and have the city set up a special department to expedite coronavirus-related improvements business and property owners would like to make.

Though tourism, one of the city’s economic drivers, is likely to feel the effects of coronavirus for a few years, some task force members said Beverly Hills is primed to be one of the first destinations to recover, and they encourage city leaders and business owners to start thinking now about how to maximize the return of tourism.

Chris McMillan, a well-known stylist, said his partner lives in Paris, and residents of large cities that have been hard-hit by COVID-19 will be looking to travel to places like Beverly Hills as soon as they can, which he believes will likely be in 2022.

“They … want to come to California because we’re flat, we’re spread out, we don’t have public transportation and we don’t have dense areas. I definitely see a light at the end of the tunnel …. We need to be creative. We need to think of the future,” McMillan said.

The task force members made clear, however, that the reopening would only happen if conditions are safe for everyone.

“There need to be those protocols that we also discussed … because otherwise, we could be the victim of our success. It’s so enjoyable and the weather is good, and then there are too many people, so we have to balance that,” Mirisch said.

Mirisch also pushed back against Sunny Sassoon, former owner of Coffee Bean and Tea Leaf, who encouraged city leaders to fight the “silly rules” put in place by the state and county.

“These rules and regulations might be suited for San Francisco, but I don’t know how suited they are for us,” Sassoon said.

Mirisch, while agreeing with Sassoon that one-size-fits-all rules aren’t the best way forward, noted that restrictions won’t be eased until safety is assured.

“In terms of asking for a relaxation of some of the other rules or other businesses, we’re going to have to let the science be our guide,” Mirisch said.