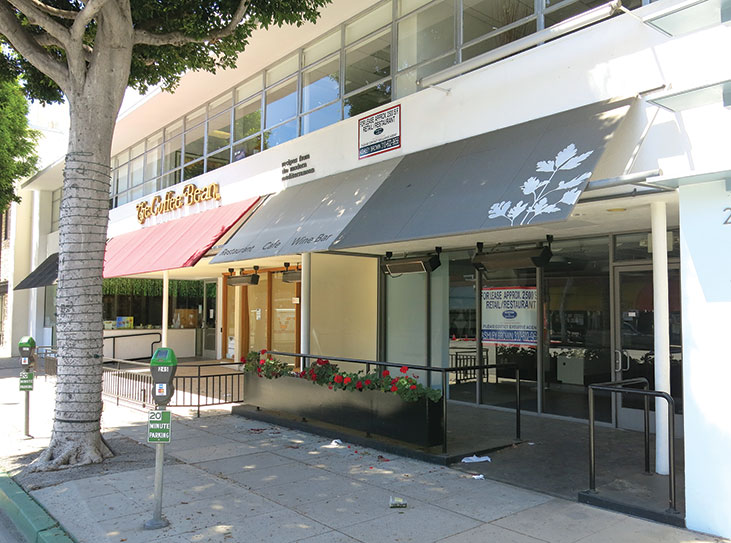 Multiple commercial properties on South Beverly Drive have been vacated since the start of the coronavirus pandemic. (photo by Cameron Kiszla)

In its formal session on May 5, the Beverly Hills City Council voted unanimously to make three minor adjustments to its emergency ordinance.

In light of Gov. Gavin Newsom’s decision that some retail stores – such as stores selling clothing, sporting goods and flowers – can open for pick-up service as early as this week, the council decided to expand its curbside pick-up zones for restaurants to include the retail businesses that will be allowed to reopen.

The council also decided to close the city’s parks for Mother’s Day, as Los Angeles city and county parks will be closed.

“We’re concerned about being the only game in town,” said Jenny Rogers, the city’s director of community services.

The council also adjusted its protections for commercial renters. In keeping with its vote last month to exclude Fortune 1,000 companies from that relief, the council chose to exclude those companies’ subsidiaries as well.

Larger changes, however, are likely to come in two weeks, as the council discussed rent repayment for commercial and residential tenants during the May 5 study session so that city staff could return with an ordinance for consideration on May 19.

Council members said they’ve received reports from landlords that some commercial tenants had been taking advantage of the city’s ordinance by withholding rent they could pay and using that saved money like a free loan from their landlord. That sentiment was echoed by several landlords who spoke during public comment.

In response, the council will consider breaking out commercial tenants into different groups that can be governed differently, such as retail, office and restaurant tenants.

Finding rules that fit each category will be challenging, the council members said. For instance, Vice Mayor Robert Wunderlich said, the impact on retail is evident, but different offices are affected in different ways by the coronavirus pandemic.

“Many offices might be feeling some impact on their business, but they’re not necessarily devastated as much as retail is being [devastated] … In my mind, I do see reasons to restrict the language in our ordinance of retail tenants, the ones for which it is more unambiguously clear that they’re suffering the impacts of the virus,” Wunderlich said.

The repayment amounts and timing are also concerns, council members said. The council discussed options such as equal monthly repayments, graduated payments and balloon payments – which save the largest portion of the repayment for the final installment – but even that could be affected by a phased reopening, where some tenants are allowed to begin operations earlier than others. One point the council members seemed to agree on, however, was that balloon payments should be avoided if at all possible.

“It may be very hard to make a balloon payment at the end of some period of time … if you’re not making payments along the way,” Councilman Julian Gold said.

For residential tenants, the council found similar issues, as some people will be able to return to work sooner than others, and even those who have work may not be working full-time.

“I don’t think a rigid fraction is going to work or fit every time period, but the goal is as people gain the ability to repay, they repay, and that might not happen in a linear path,” Wunderlich said.

“It’s very, very individual with the situation of people who are recovering or have lost work due to COVID … We want people to not wait and to pay as much as they can,” Councilman John Mirisch added.

Similar to the commercial renters, the council is seeking to avoid balloon payments at the end of the established 12-month repayment period, as a large amount due several months down the road might create a “perverse incentive” for tenants to leave their unit without repaying the landlord, as Wunderlich said.

“Something has to be in there so there is an incentive to pay it and not have that balloon payment at the end. It’s going to be very difficult for a person to pay it at the end, and it’s going to be very difficult for the landlord to sustain the property when they’ve gone without at least part of the rent at the front-end period,” Mayor Lester Friedman said.

While many of the details of repayment for commercial and residential tenants remain up for discussion, every council member said – often more than once – that all tenants should pay what they can pay, even if it’s only part of what they owe. The key, the council members said, is for tenants and landlords to come together and reach an agreement, ideally without requiring city involvement.

“We worked really hard to find a balance … The goal here is if you can pay, pay,” Councilwoman Lili Bosse said.

Sidewalk repair begins after trees are spared the ax

Governor to let some stores reopen May 8