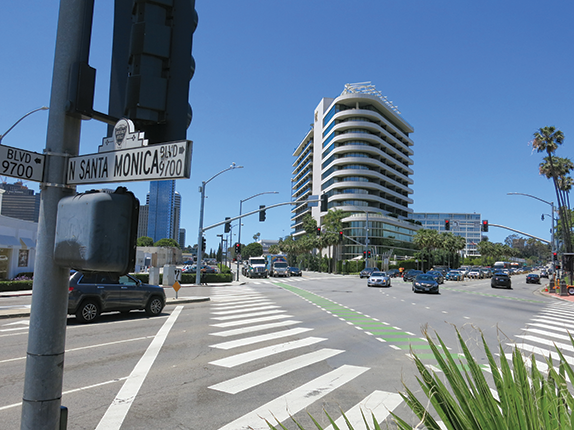 The reconstruction of Santa Monica Boulevard on the western side of Beverly Hills may be delayed due to the coronavirus pandemic. (photo by Cameron Kiszla)

In a May 14 study session, the Beverly Hills City Council approved a framework for cuts to city expenses as part of the city’s budget process.

Due to the coronavirus pandemic, three of the city’s economic drivers – sales, business and hotel taxes – are expected to see steep drop-offs in the coming year, said Don Harrison, budget and revenue officer for the city. Harrison estimated sales tax would be 43.8% lower than last year’s budgeted revenue, the transient occupancy tax on hotels would be down 45% and business tax would be down 26.6%.

“The last thing we want to do is over-project revenue and end up being short sometime during the year, so we always take that conservative approach. Even with that, we’re looking at a severe decline next year,” Harrison said.

With that in mind, the City Council directed staff to pursue several avenues for cost-saving cuts.

For instance, reducing some funding for capital improvement projects, delaying vehicle and equipment replacements, and reducing material and supply purchases could save the city more than $24 million.

Some larger projects, such as a continuation of the Santa Monica Boulevard reconstruction project on the westernmost side of the city, have millions of dollars allocated, but no start date in sight, Harrison said. That money could be better used in other ways now.

“We think that the money could be used in the short term to keep vital services going, and in the long term, when we recover, we would be able to put money back in there,” Harrison said.

The city can use hiring freezes, voluntary early retirements and buyouts, and delaying scheduled salary increases – as well as furloughs and layoffs, if necessary – to come up with another $11.6 million, Harrison said.

Harrison also proposed that the council could use $5.6 million of its $13 million budget stabilization reserve to finish balancing the budget. While the council was open to using reserve money, some council members wanted to look closer for cuts before reserves would be used.

“I would like to make sure that we have really, really scrubbed this budget to ensure we have saved every dime that we can before we get into the budget stabilization fund,” Councilman Julian Gold said.

Councilman John Mirisch also proposed that the city could take advantage of the opportunity presented by the crisis to become “leaner and meaner, or cut some fat that we maybe should have been doing anyway.”

“Hopefully, by streamlining, by doing things better, we really can – in doing more with less – we will not need to have noticeable service cuts,” Mirisch said. “As good as any organization is, nothing is so good that it can’t get better. Let’s look at this as an opportunity to improve.”

Vice Mayor Robert Wunderlich made clear that the cost-cutting measures were not something that the city wants to do, but rather a matter of necessity.

“These are items that we want, but the impacts are great enough that we will have to consider wide-ranging cuts,” Wunderlich said.

The council members agreed that this year’s budget will be abbreviated, and city staff will return for changes to the budget as needed due to the ever-changing nature of coronavirus-related regulations and the economic impact of those rules.

City staff will also return for another study session before the budget is adopted in time for the new fiscal year to begin on July 1 so that the council members can further debate where the cuts should take place.

Not all is doom and gloom, however, as Harrison said the economy as a whole is likely to see a v-curve, which is marked by a sharp decline and a sharp recovery. Hotels and retail are more likely to see a swoosh curve, which features a sharp decline and more gradual recovery that could take up to three years, but Harrison said he was encouraged, as he believes “we’ve already seen the down” and he is seeing “the forecast of a decent comeback.”

That comeback could be further enhanced by pent-up demand that is released through people spending more than they normally would once stores reopen, a phenomenon that Harrison said is known as “revenge shopping” in some parts of Asia.

“We’re hoping to see a lot of revenge shopping in the triangle as soon as we open things back up,” Harrison said.

Mayor Lester Friedman was similarly optimistic about the city’s future.

“Once we have the opportunity for the economy to rebound, I think it is going to rebound, and the question of course is when,” Friedman said.