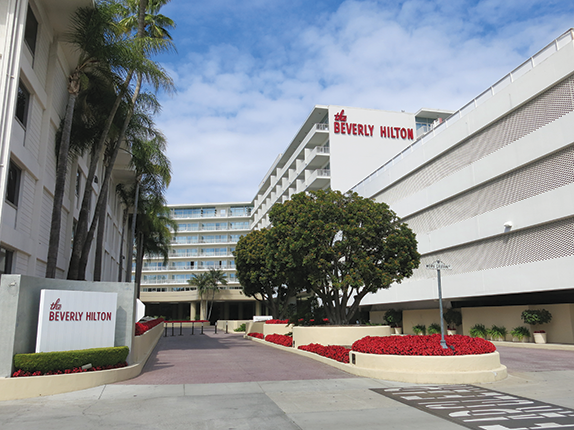 The Beverly Hilton will host the Golden Globe Awards on a Thursday in January 2021. (photo by Cameron Kiszla)

Big changes are likely coming to the 2021 Golden Globe Awards.

NBC, which broadcasts the awards show, is picking up an additional football game to be shown on Jan. 10. The Golden Globes, which would have taken place that night, were rescheduled for Thursday, Jan. 7, 2021.

With the event scheduled to begin at 5 p.m. at the Beverly Hilton hotel, the Beverly Hills City Council had to decide at its May 5 meeting if rerouting rush-hour traffic is worth keeping the event in the city.

“In effect, if Beverly Hills wants to have the event, we need to come up with a plan to accommodate it, or they could look for a different location,” Mayor Lester Friedman said.

During a study session, the council expressed unanimous support for working with the Hollywood Foreign Press Association and Dick Clark Productions to make a Thursday night Golden Globes a reality.

Assistant Chief Marc Coopwood of the Beverly Hills Police Department, standing in for the soon-to-retire Chief Sandra Spagnoli, and Lt. Blake Nance said the preliminary traffic plan involves the nominees and other attendees traveling against the normal flow of post-work commuters. City staff will return to the council in the fall with more details to ensure the plan is workable, but as of now, the city plans to only close a portion of Santa Monica Boulevard, instead of closing Santa Monica and Wilshire boulevards as it has in the past.

“Really making sure, well in advance, that our community knows the change in the dates and the routes to ingress and egress home,” Coopwood said.

The Golden Globes being held on a Thursday night is only anticipated for the 2021 event, said Don Harary, an associate producer for Dick Clark Productions.

“To the best of our knowledge, this is a one-year situation, and we just have to play every year as it comes,” Harary said.

Coopwood added that the Hollywood Foreign Press Association and Dick Clark Productions had worked closely with the city to make the event happen. In light of the coronavirus pandemic, the HFPA and DCP have already started talking about whether there will be a nominee-only show, if there will be a limited after-party size and other COVID-19 related contingencies.

“The Golden Globes has a long history with the city of Beverly Hills, and we feel like our partnerships are stronger than ever,” Coopwood said.

Though the new traffic plan is likely to remain in place only for one weekday rush-hour, Councilman John Mirisch encouraged the city to learn lessons from this event in case other organizers wish to pull off a similar feat on a weekday.

“Let’s make the best of it,” Mirisch said.

Councilwoman Lili Bosse, who enthusiastically supported the proposal, added that the discussion was a welcome reprieve from the coronavirus-related topics that have dominated council matters in recent months.

“I’m happy to hear, given the kind of conversations that we’re dealing with right now, that we’re all being optimistic and hopeful that in the beginning of 2021, we can yet again host the Golden Globe awards,” Bosse said.

Friedman added that he hopes the 2021 Golden Globes, which will be hosted by Tina Fey and Amy Poehler, will be “the reopening of the ability to have tourists again in Beverly Hills.”

“That may be wishful thinking, but I’m just hopeful at that point in time, that this will really be the dawn of a new age,” Friedman said.

Garcetti: Los Angeles will get back to work safely