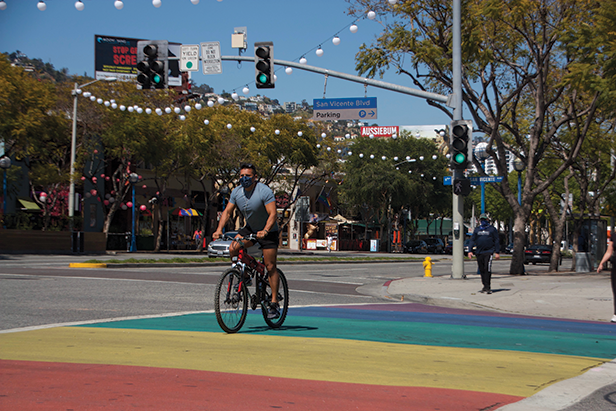 The West Hollywood City Council met for its biweekly meeting on April 20, and joining City Council members virtually was U.S. Rep. Adam Schiff (D-Burbank), who provided an update on the federal response to the COVID-19 pandemic.

Schiff, who represents California’s 28th District which includes West Hollywood, provided an update on action Congress will likely take this week including additional funding for hospitals, COVID-19 testing, and support for small businesses and renters.

Schiff said Congress is working on a follow-up to the CARES (Coronavirus Aid, Relief and Economic Security) Act passed by Congress and signed into law by President Donald Trump on March 27. The legislation was a $2 trillion economic relief package aimed at protecting Americans from public health and economic impacts of COVID-19.

Some assistance included stimulus checks to assist workers and the Paycheck Protection Program, which supports small businesses through a $350 billion fund.

Schiff added the PPP reached capacity, and Congress is looking to replenish it in the next package for $310 billion, which was approved by the Senate earlier this week and may be voted on by the House of Representatives as soon as today.

Schiff also said there were a number of problems that were identified with the PPP.

“If you’re a small business, and you’re a customer of a large bank, it was often difficult to get funding through the program,” Schiff said. “Many of the large banks choose to favor their larger, more lucrative customers. Those who banked with smaller banks generally got better service and managed to get through the program, but many didn’t.”

He said Congress, more so Democrats, want to make programmatic changes to ensure that every small business has equal access, and banks don’t play favorites.

“The pandemic is hitting poor communities, minority communities in particular lethal ways,” Schiff said. “We are seeing tremendously disparate harm from this virus. We didn’t want to compound it by making it even more difficult for those struggling to keep their businesses afloat.”

The follow-up package will be a partial answer toward helping small businesses, Schiff said.

West Hollywood Councilwoman Lauren Meister asked about the stimulus checks and if there was a better way to get them out to Americans.

“In the early days [of the pandemic], there was this urgency to get money out to people,” Meister said.

Schiff said that Americans would be far better off with a universal program of paycheck or payroll protection rather than a quilt of small businesses programs, a large industry program or a stimulus check program.

Although he supports the efforts by the federal government so far, he is advocating for a comprehensive approach with something called the Payroll Guarantee. This program, which is still being discussed, would allow businesses and cities to keep their employees by providing funds to maintain payroll.

“Even if they are working from home, even if they are furloughed, or not able to work from home, they are still employed and still getting a paycheck,” Schiff said. “They can use the check to pay rent and they won’t have to look for a job when we are on the other side of the curve.”

The city has a population in which 78% are renters, and although the city of West Hollywood passed a moratorium to help residential and commercial renters and tenants, people who aren’t working can’t suddenly come up with $8,000 or $10,000 when the moratorium is raised, Duran said.

“We have money in reserve, and we will be dipping into it, but we can’t sustain that without help from Washington,” Duran said.

“We know that cities have also taken steps to allow renters postpone rent payments and not face evictions,” Schiff said. “I am co-sponsoring legislation that would provide $250 billion to try to help small cities, as well as co-sponsor of a federal campaign for $100 billion in relief for renters to try to ease this burden on renters and tenants.”

He added it’s also vital for cities like West Hollywood to make up for lost revenue. But Congress is struggling to put a provision into new legislation that would allow cities to access some of the CARES Act funding, not just for pandemic response, but also for revenue loss, he said.

City Manager and Director of Emergency Services Paul Arevalo appreciated Schiff’s discussion and how he understood that cities need support.

“The last relief bill provided funding to cities with populations with more than 500,000. That’s only 36 cities of the nearly 20,000 cities in the U.S.,” Arevalo said. “Only 36 cities are getting relief from the federal government. Of the incorporated cities, nearly 15,000 of those have populations under 5,000 people.”

West Hollywood is affected too, as city staff is hyper-focused on creating a one-year budget that balances revenue and expenditure because the city anticipates to lose $15 to $20 million based on the shut down of business, Arevalo said.

“We are looking for some quick fix that will most likely be a deferral of some projects, but as we roll into the next year it’s going to be a real challenge for us to look at the new economy, and what our new revenue will look like over the next three, four or five years,” Arevalo said.

Mayor Pro Tempore Lindsey Horvath said as of now, cities are not getting direct funding from the federal government. The funds go to the state, and there is no requirement to have the money come to the local level in a set period of time.

Horvath, who is a member of the National League of Cities, said the organization is working to obtain federal relief to small cities like West Hollywood, and will continue to advocate until the federal government takes action.

Additionally, Schiff said Congress hopes to provide $25 billion in funding for hospitals and health clinics because there is a great need to support them.

There’s a lack of funding for health clinics such as the LGBT Center or Planned Parenthood that serve communities like West Hollywood, Schiff said. He hopes to change that in future legislation.

Duran said the LGBT community has expertise in the area of testing and would be an asset during the COVID-19 pandemic.

“We’ve been through an epidemic,” Duran said. “We know the difference between an antigen test from an antibody test, we know why an ELISA (enzyme-linked immunosorbent assay, which tests for antibodies in blood) test is important, we know about contact tracing because we had to do all this in the ‘80s.”

He added that there seems to be a belief out there, from a lot of people, that if people get tested then everything will go back to normal, but it’s not just testing at any one moment. It’s about continuous testing, he said.

“I hope as you and other L.A. delegates tap into the LGBT community on these issues because we’ve been through it before and we paid a heavy price in terms of loss in our community,” Duran said. “We are standing by ready to offer our expertise and experiences on how to do some of these things.”

Schiff agreed and added there are many holes in the safety net of health care, access to capital and the unemployment compensation system, and before society can think about reopening, attention must be paid to testing, self-isolation, tracing of those who are positive and social distancing.

“As we plan our way forward, we have to think about how we build a better, more equitable and just America as we emerge from this,” Schiff said.