Students, parents, administrators talk how best to cap off the school year 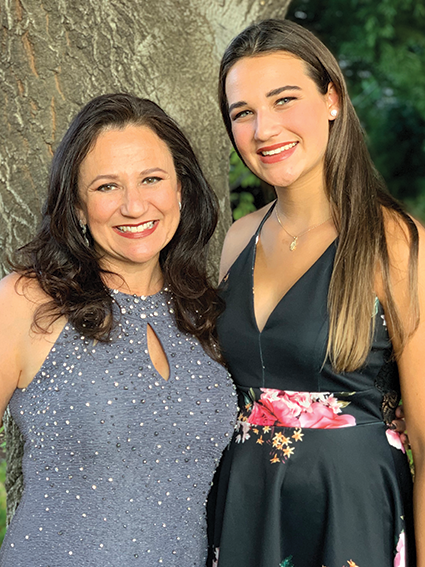 Mother and daughter Ilysia and Madison Pierce want this year’s seniors to have some form of graduation ceremony to recognize the students’ hard work and accomplishments. (photo courtesy of Ilysia Pierce)

In light of the coronavirus pandemic, graduations, end-of-year parties and grad night at Disneyland have been canceled, leaving many parents and students disappointed.

Beverly Hills Unified School District conducted a survey asking students if they prefer to have a delayed graduation, if the scheduled June 4 event can not occur.

Most BHHS seniors want the ceremony to take place by the end of July, if possible, though a slight majority of those who answered the survey said they’d return next summer for a makeup ceremony if that was the only option. A survey of Beverly Vista Middle School students produced similar results regarding the eighth-grade commencement ceremony.

On April 20, the BHUSD Board of Education voted unanimously to authorize the creation of videos honoring the BHHS seniors and the BVMS eighth graders.

“Since we weren’t really sure what was going to happen with the ceremony, whether it was canceled, whether it was going to be postponed, we wanted to have something special for this group, the seniors and eighth graders, they’ve missed out on such a big portion of the celebration,” BHUSD Superintendent Michael Bregy said.

“I think having a video as a backup is a great thing to do. The board has not and will not cancel graduation unless the state dictates it,” board member Noah Margo said.

Margo added that while the board won’t cancel the ceremony until it has to, he is pessimistic about the prospects for graduation and commencement. He thinks the district will know for sure if graduation will have to be postponed or canceled prior to June 4.

“There’s a very good chance that there will not be any graduation. This has to be a graduation backup … I don’t think we’re going to have a gathering at all. I don’t think that’s going to happen. I think it would be a miracle if that happens at this point, and we’re very short on those,” Margo said.

Parents and students have also been submitting alternate ideas for graduation, such as a parade of cars or drive-by ceremony, to the school district.

Rebecca Starkins, director of public relations for BHUSD, said in an email that the district “is committed to a physical graduation at this time for both eighth grade and our seniors.”

“We are working with the board of education, school principals and parents to give our students a very special end to their school year,” she said.

The Los Angeles Unified School District is planning  “a virtual graduation, at least for now,” Superintendent Austin Beutner said in a speech on April 13.

“Frances Suavillo, the student representative on Los Angeles Unified board, has been leading a group of students at my request to come up with recommendations on how we appropriately celebrate what, for the class of 2020, has been a lifetime of hard work,” Beutner said. “We also want to recognize athletes, scholars, artists and others who have accomplished many great things. And we’ll need to celebrate the culminations and great work of others in all grades.”

Some students and parents, however, are still pushing for some form of in-person ceremony. Ilysia Pierce, a Los Angeles resident who is cantor at the Beverly Hills Temple of the Arts, said the football field at Palisades Charter High School in Pacific Palisades offers plenty of room for a socially distanced ceremony for her daughter, Madison, and her classmates.

Pierce added that the students, necessary speakers and administrators could all wear masks along with their caps and gowns. They would remain 6 feet apart from one another, and family and friends could watch a livestream at home.

“I’d rather have my daughter graduate and walk in cap and gown and receive her diploma for this commencement … I’d rather see that from my dining room than not have a graduation at all,” Pierce said.

Madison Pierce, who plans to attend Cal Poly San Luis Obispo this fall to major in industrial engineering, said in an email that she believes her mother’s plan for a socially distanced graduation is “the class of 2020’s best chance” to have a graduation ceremony. She added that a ceremony, whether it’s virtually held or an in-person event that requires social distancing, would “mean the world” to her and her classmates.

“Nothing will ever compare to the [ceremony] we all have dreamed about since kindergarten, but hearing our names be called out, whether it’s sitting on the field 6 feet apart with masks on, or watching from my TV at home, will give closure and a memory to us,” she said.

Madison Pierce said that, if the ceremony were postponed, she would come back to participate.

“Nothing will ever compare to what could have been, but some form of graduation is better than nothing,” she said.

We’re all in this together, apart