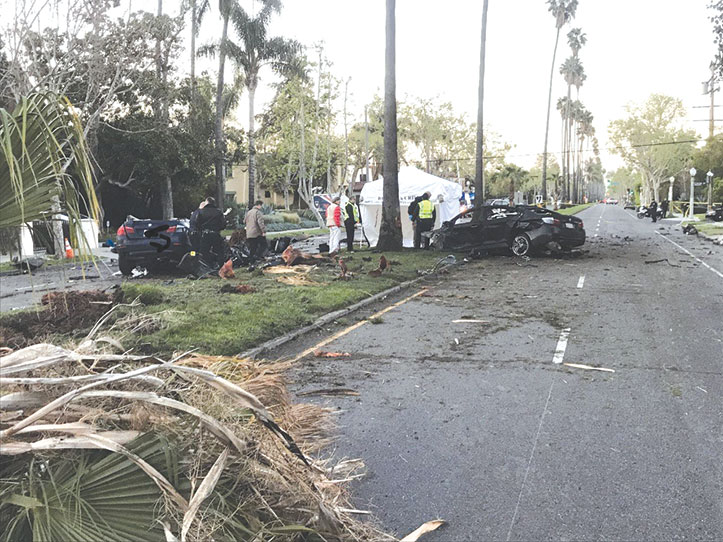 Detectives determined the collision on Highland Avenue – in which three people died and another was injured – involved street racing. (photo courtesy of the LAPD’s West Traffic Division)

Three men were killed on March 30 when the two vehicles they were in collided with each other during an illegal street race and then struck a palm tree on the Highland Avenue median, just south of Melrose Avenue, police said.

The collision occurred at approximately 1:55 a.m. and left car parts and debris scattered across Highland Avenue south to Clinton Street. The vehicles, two BMW sedans, had been traveling at a “very high rate of speed,” said Officer Joel Twycross, with the Los Angeles Police Department’s West Traffic Division. Two men were pronounced dead at the scene and a third was taken to Cedars-Sinai Medical Center, where he died. A 21-year-old female passenger in one of the cars sustained non-life-threatening injuries and was treated at Cedars-Sinai Medical Center, Twycross said.

The Los Angeles County Medical Examiner-Coroner’s Office identified two of the decedents: Nathaniel Joseph, 28, and Keante Hoyett, 27. Joseph is a resident of Inglewood, but the coroner’s office has not identified Hoyett’s city of residence, said Lt. Rudy Molano. Twycross identified the third decedent as Jarred Morris, 27. His city of residence was also not available.

Using security video footage, investigators determined the two BMWs were heading south at high speeds on Highland Avenue as they passed Melrose Avenue. The two cars collided with each other, careened off the roadway and struck a palm tree, which collapsed on the median, Twycross said. Authorities have not determined how fast the vehicles were traveling and whether the occupants of the vehicles were wearing seatbelts, Twycross said. The investigation is ongoing and will likely take days or weeks to complete.

“They were street racing, that has been confirmed. They knocked over a 60-foot palm tree. I have seen semi-trucks hit palm trees and bounce off, so to have a BMW knock one down is insane,” Twycross said. “People tend to think of Highland Avenue as a major street, and too often, people speed down Highland. We have a lot of accidents on Highland Avenue between Melrose and Wilshire because people are just going too fast.”

The triple-fatality collision on Highland Avenue occurred a day after a Ferrari crashed on Melrose Avenue near Vista Street. Photographs of the collision were posted on social media by the Melrose Action Neighborhood Watch. No injuries were reported and Twycross did not have any information about that collision. He said street racing continues to be a problem, however, and police will be looking for people racing driving recklessly to protect public safety.

Anyone with information about the collisions are asked to call detectives with the LAPD’s West Traffic Division at (213)473-0234.