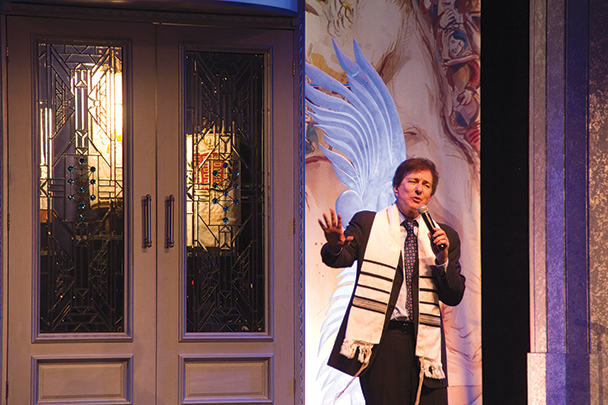 Beverly Hills Temple of the Arts has long been a beacon in the community, offering services and special programs grounded in the Jewish faith in its home in the historic Saban Theatre.

Those connections to the community have become particularly poignant during the COVID-19 public health emergency, with many people turning to temple founder Rabbi David Baron for help and information. The temple owns the Saban Theatre, an art deco landmark at 8442 Wilshire Blvd., and regularly holds Shabbat and holiday services in the ornate auditorium. With stay-at-home order in effect, Baron has been holding services and other programming online, and is finding other ways to connect with the temple’s 1,000 members.

“I have made it a pet project to reach out to every member of the temple with a call,” Baron said. “People have many needs, and I want to be sure to be there for them. We have been very actively supporting them.”

Baron said he has been keeping his community informed, and recently learned many members had questions about public safety. The rabbi was in close communication with the Beverly Hills Police Department as a precautionary measure following attacks on Jewish synagogues in Pittsburgh, Pennsylvania, and Poway, California, during the past two years, as well as vandalism last December at the Nessah Synagogue in Beverly Hills. Baron arranged a videoconference on April 22 with Beverly Hills Police Department Chief Sandra Spagnoli, who told members that crime has remained low during the COVID-19 emergency, Baron said. The videoconference with Baron and other members of the temple was three days before Spagnoli abruptly announced her retirement, and Baron added that she said nothing to them about it and the news was a surprise.

The rabbi said members also had questions about a city of Beverly Hills order requiring face masks or face coverings in public, because they saw many people without them. Spagnoli told congregants that the police department was taking an educational approach with the rule, informing people about the need and reasoning for face coverings at this time, Baron added.

“The chief confirmed for us that there had not been a spike in crime, it’s been very stable. Those were very reassuring statements,” Baron said. “The information she gave us was meaningful and effective. I hope whoever succeeds her follows through on keeping the community safe and communications open.”

Baron said the temple has been helping in other ways during the pandemic such as supporting the Man/Kind project, which is providing food for seniors and the homeless population. He said contributions have enabled 800 bags of groceries to be delivered to people in need.

“We are actively supporting them as part of outreach we are doing,” Baron added. “It’s something we hope to build upon.”

Baron said it is important for religious leaders to increase community service during the public health emergency and Beverly Hills Temple of the Arts will continue to be a resource. He also joked because of stay-at-home orders, it has been much easier to reach people directly with a phone call.

“We used to call and leave a message, but now we are actually getting people on the line,” Baron quipped. “I guess that is another positive thing that has happened.”