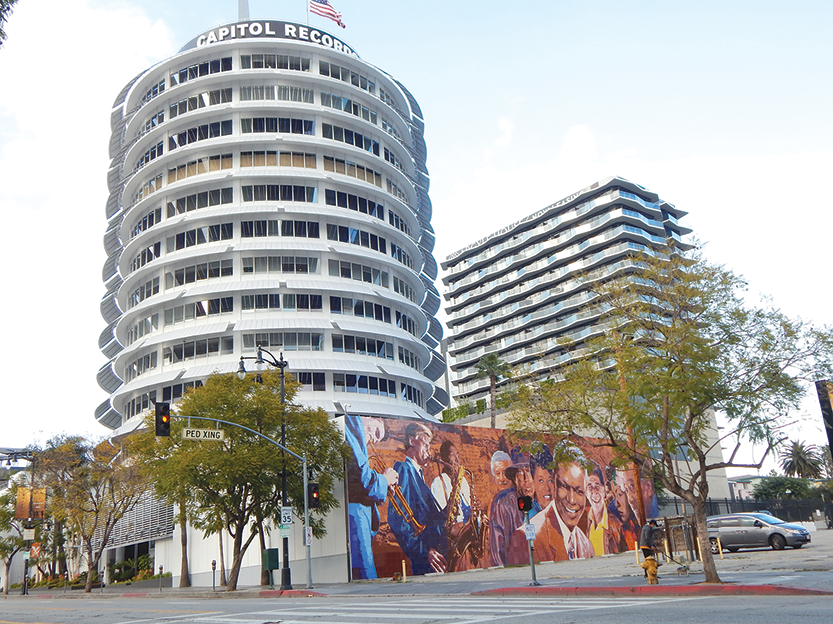 The Hollywood Center Project is proposed on parking lots surrounding the Capitol Records Building, which will be preserved. (photo by Edwin Folven)

The Los Angeles Department of City Planning opened the public review period on April 16 for the Hollywood Center Project, a mixed-use development proposed for the area around the Capitol Records Building by the same developer who previously proposed the Millennium Hollywood project.

Developer MP Los Angeles has announced that the Hollywood Center Project will be a 4.5-acre, mixed-use community built on sites currently occupied by parking lots on both sides of Vine Street just north of Hollywood Boulevard. The Capitol Records Building will be preserved.

The project will include two buildings – one 46 stories and the other 35 stories – along with two 11-story mid-rise buildings. It will house 1,005 residential units, of which 872 will be market-rate units, and 133 will be for very low- and extremely low-income seniors. MP Los Angeles plans to have the senior housing managed by the nonprofit Menorah Housing Foundation.

According to a project description on the Los Angeles City Planning Department’s website, an option exists for the developer to alter plans for the site and include a 220-room hotel, which would result in a lower number of market rate apartments – 768 units. That option also includes an additional 116 affordable units for seniors. 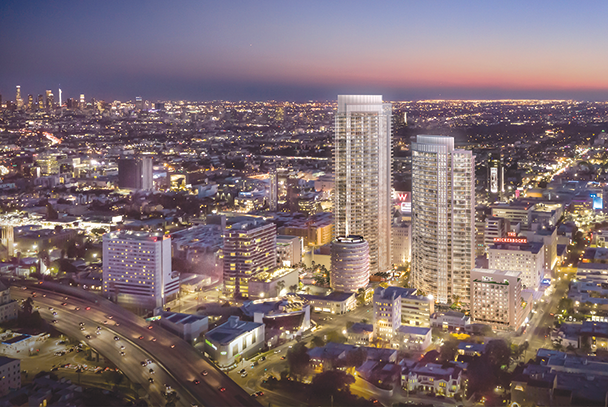 MP Hollywood has released a rendering showing the configuration of the Hollywood Center Project. (rendering courtesy of Handel Architects)

The Millennium Hollywood project was approved by the Los Angeles City Council in 2013 and later halted in 2015 after community groups filed a lawsuit and a judge ruled the project’s impacts on the surrounding area were not adequately addressed. The developer went back to the drawing board to create the new Hollywood Center Project.

“MP Los Angeles has worked closely with the Hollywood community and elected officials to create a project that addresses Los Angeles’ current and future needs, from affordable housing and environmental stewardship to neighborhood revitalization and historic preservation. We are pleased with the findings from the city’s DEIR released last week, as it substantiates that this is a carefully designed and environmentally conscious project,” said Mario Palumbo, a partner with MP Los Angeles, in a statement.

Palumbo added that the 133 affordable units are “one of the largest complements of on-site affordable housing within a market-rate development in the history of the city,” and Menorah will provide “critical on-site social services for the senior residents” of those affordable units.

“In addition to the affordable and market-rate residences, the mixed-use project will enliven the site with two civic plazas lined with retail shops and restaurants and new pedestrian walkways connecting Argyle Avenue and Ivar Avenue,” Palumbo said.

The release of the draft EIR on April 16 began a 45-day period for the public to review the plans. Comments from the public will be included in the final EIR. The project will then undergo an additional public review period before being considered by the Los Angeles Planning Commission, the Los Angeles City Council’s Planning and Land Use Management Committee and the full council. Los Angeles City Councilman Mitch O’Farrell, 13th District, said he will review the draft EIR and has not made any decisions about the project.

“I have to spend some time on it and take a good long look, but one thing is clear, this project has so much more going for it than it did seven years ago in terms of covenant affordable housing, in terms of senior affordable housing and just more housing in general,” O’Farrell said. “I feel much more optimistic about the Hollywood Center Project now than I did seven years ago. We have taken great care in making sure before the project team ever published the draft EIR, that it had mechanisms that benefit some of the greatest needs that we have, and that is affordable housing, and housing in general.”

O’Farrell also cited the project’s advantage of being close to public transit at the Hollywood/Vine Red Line subway station, and that it would not require much demolition because the site is largely parking lots. O’Farrell reiterated, however, that he needs to look at “all the details” before weighing in on the Hollywood Center Project.

The Millennium Hollywood project was hotly contested by stopthemillenniumhollywood.com, led by attorney Robert Silverstein, who filed the lawsuit that resulted in the ruling halting the development. Silverstein is also leading opposition to the Hollywood Center Project.

Los Angeles Superior Court Judge James C. Chalfant noted the project’s potential effect on traffic on city streets and the nearby Hollywood (101) Freeway in his 2015 ruling, but Silverstein said there are far more potentially dangerous impacts. Silverstein highlighted a dispute over the location of earthquake faults that run through Hollywood near the project site. State geologists determined faults are located near the site, but precise locations are not documented. The Millennium Hollywood developer hired experts who determined through extensive testing in 2015 there were no significant seismic threats at the project site, and the city later certified those studies.

“Like Jason from the grave, Millennium is back. This time, they slightly tweaked the project and are lurking under a new name, called ‘Hollywood Center.’ But a rose by any other name stinks just as bad,” Silverstein said in a statement. “‘Hollywood Epicenter’ is more accurate. These massive proposed skyscrapers will have all the dangers of the original project, and more.”

The draft EIR is available for public review in person by appointment only at the Department of City Planning, 221 N. Figueroa St., Ste. 1350. The draft EIR, and the documents referenced in it, may be purchased on CD-ROM for $5 per copy. To arrange for a CD-ROM copy to be mailed, or for additional accommodations, call Mindy Nguyen at (213)847-3674 or email mindy.nguyen@lacity.org.

An overview of the draft EIR is available by visiting planning.lacity.org/development-servi­ces/eir/hollywood-center-project-1.

You should be watching FX on Hulu’s ‘Devs’