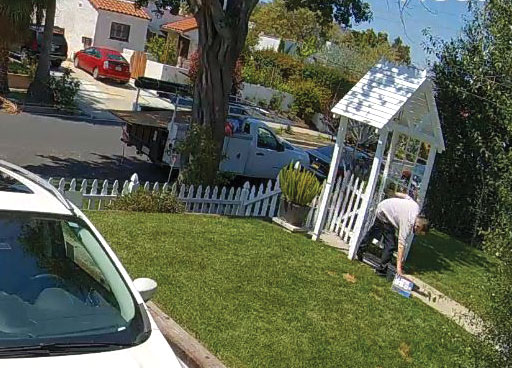 Detectives with the Los Angeles Police Department’s Wilshire Division are searching for a package thief who targeted residences in the Melrose area on April 11. Authorities said the thefts illustrate the need for residents to take preventative measures, particularly during the COVID-19 health emergency.

The male suspect was captured on security camera video stealing a package that had been delivered minutes earlier, said Detective Edward Griffin, with the Wilshire Division. Investigators believe he was following the delivery van and likely committed another theft reported around the same time at a different residence near the site of the first theft. The exact locations where the thefts occurred were not provided. Griffin said the video footage of the suspect was particularly helpful, as one resident had placed a camera in a tree in front of his house that enabled authorities to see his vehicle.

The suspect was described as white or Latino, 30 to 40 years old, 5 feet 10 inches tall and 200 to 220 pounds. He was driving a late-1990s Mercury Mountaineer. Griffin said the suspect may have folded or obscured the license plates to hide his identity.

Through their investigation, detectives learned that many delivery companies have instructed drivers not to touch door knobs, gate latches and other surfaces frequently touched by others due to the COVID-19 emergency. Packages placed close to sidewalks are obviously easier for thieves to steal, Griffin said. In one of the cases in the Melrose area, the package was placed just inside the front gate.

The detective suggested using a box or other receptacle that preferably locks after a delivery is made. He said some companies offer special arrangements for deliveries.

“We are trying to stay ahead of an emerging trend,” Griffin said.

Anyone with information about the thefts is urged to call investigators at (213)922-8251.