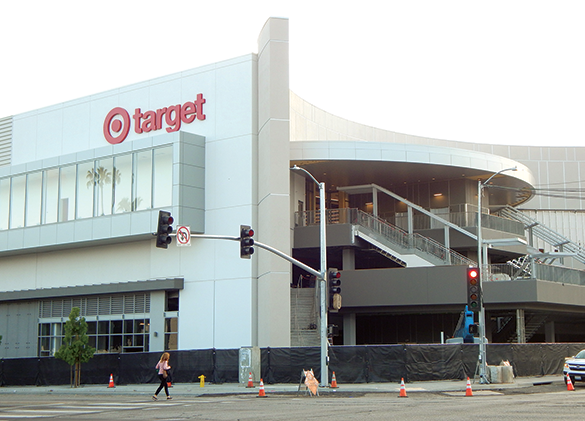 Lane closures have been approved that will allow expedited construction on the Target store in Hollywood. (photo by Edwin Folven)

Since the COVID-19 public health emergency began and a “Safer at Home” order was issued in March, Los Angeles City Councilman Mitch O’Farrell said he has been hard at work serving residents of the 13th District. He has supported relief for tenants and property owners including a moratorium on evictions and freezes on rent increases. He has also helped to complete the groundwork for an expansion of coronavirus testing and ensure efforts are made to help members of the homeless population. The COVID-19 pandemic has many facets, and O’Farrell said he is focused on a multitude of approaches in the city’s unprecedented response.

With many people out of work because of the COVID-19 emergency and struggling to pay rent, O’Farrell is calling for the federal government to provide aid such as rent forgiveness. That aid must be also made for mortgage holders and property owners, many of whom also suffer when rent cannot be paid. He was joined by Council President Nury Martinez, 6th District, and Councilwoman Monica Rodriguez, 7th District, in authoring a resolution of support for more assistance in upcoming federal relief packages.

“After the Great Recession, the feds bailed out the banks and the auto industry. This time around, renters and mortgage holders need a bailout because they are hurting, and only the feds can do that,” O’Farrell said. “We get demands for us to do that at the local level; we do not have the jurisdiction to do that. Understandably, people are distressed, they’re worried, scared and everyone has a right to be, but if we enacted a law that only the feds can, it wouldn’t be enforceable and it would put us in a very risky legal position, to say the least. So, we are all pulling together for the feds to lean in, and when the Assembly and Senate in the state meet in early May, we will be working with them in close collaboration to see what kind of relief the state can give.”

Another area of concern is COVID-19 testing, and O’Farrell said he is eager for the city to increase locations. He authored a motion that would allow the city to temporarily close streets to accommodate testing sites. He cited Clinica Romero near at 123 S. Alvarado St., near Beverly Boulevard, as a site where curbside testing may occur, and added there are considerations for possible future testing at the Saban Community Clinics sites.

O’Farrell is exploring plans to make more hotel rooms available to medical first responders and others on the frontlines addressing the pandemic. He said many doctors and medical staff members want to self-isolate away from their families to prevent the potential spread of the virus, and hotels offer that opportunity.

O’Farrell said it is a win-win situation, and many hotel rooms are vacant because of the pandemic.

“We want to make them available for police, fire, emergency personnel, medical personnel, and that has an economic benefit as well, as hotel occupancy is down 95%,” O’Farrell said. “A lot of hotels and motels aren’t necessarily the big corporate chains, some of them are independently owned, so we want to see if there is a good match there to keep a business healthier while allowing first responders and people on the front lines to self-isolate safely.”

The “Safer at Home” order has resulted in reduced traffic levels, which has allowed for expedited construction on some projects. In Beverly Hills, the city took advantage of less traffic and closed a stretch of Wilshire Boulevard so work on the Purple Line Extension subway project could be expedited. O’Farrell said the city of Los Angeles is doing the same, allowing for a lane closure along Sunset Boulevard and Western Avenue so crews can expedite completion of the Target store in Hollywood. It is unclear how it will affect the opening, which the company has stated will be later in 2020, without providing a date. Work is well underway at the store, which remained partially finished for more than five years during legal challenges to the project until construction resumed in 2019. O’Farrell added that he is looking for other locations where a similar arrangement for street closures during the emergency order may be beneficial.

“We are taking every opportunity for what would normally cause very negative traffic impacts to move full force ahead in this time of light traffic,” O’Farrell said.

The homeless population is also of particular concern, and O’Farrell said he is working to ensure steps are being taken to offer testing and shelter for people living on the streets. He supports Mayor Eric Garcetti’s deployment of rapid-response testing teams to homeless encampments and said such testing was planned at an encampment on Gower Street under the Hollywood (101) Freeway. He added that those efforts must continue to have an outreach element that will help people obtain resources.

The city has also opened temporary shelters for homeless individuals at the Hollywood and Pan Pacific Park recreation centers, and another is scheduled to open at a recreation center on Shatto Place in Koreatown, O’Farrell said. The number of beds has been increased at shelters in the Hollywood area, including additions at the Hollywood YWCA, now serving 124 people. The winter shelter at the Salvation Army complex on Hollywood Boulevard will also remain open until the end of June, bringing the total number of beds currently available in Hollywood to approximately 200. Those are in addition to a bridge housing shelter on Schrader Boulevard, which currently houses 73 people.

“By the end of June, we are going to have a better sense of where we are with the curve, with the COVID-19 curve, and what that means,” O’Farrell said. “So, we are full steam ahead in finding temporary solutions, and we are looking at more [ways] that I can’t actively disclose. We are actively working on something very important that will house dozens, if not hundreds, more people.”

Students, parents, administrators talk how best to cap off the school year