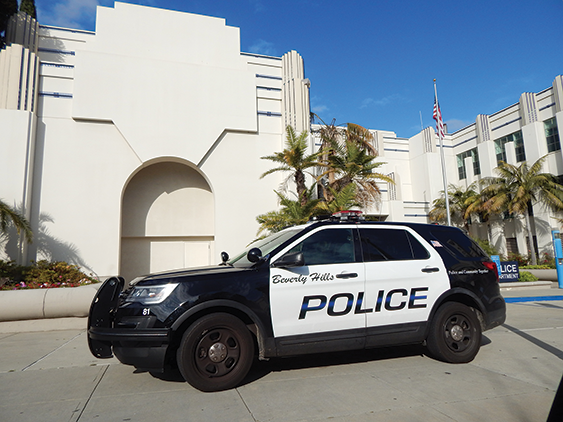 A new lawsuit alleges the Bevelry Hills Police Department retaliated against a sergeant who settled a lawsuit against the city last year. (photo by Edwin Folven)

On March 30, a Beverly Hills Police Department sergeant sued the city and Chief Sandra Spagnoli for the second time.

The lawsuit by Sgt. Scott Dibble claims the police department unfairly placed him on leave at the beginning of 2020 until recently reinstating him, causing the loss of “economic” and “non-economic” benefits, emotional distress, loss of reputation and other damages.

Attorney Bradley Gage, who represented Dibble and two other BHPD officers and employees in the previous lawsuit, which was settled last August for $975,000, claims the city placed Dibble on leave from January to April as retaliation for the previous lawsuit. He filed the new civil complaint in Los Angeles Superior Court, however proceedings are pending because of court closures caused by the ongoing public health emergency.

The city placed Dibble on leave with pay while a medical analysis requested by Dibble was conducted after he initiated a workers compensation claim following an on-duty motorcycle accident in 2018. Questions by the city arose after Dibble’s medical examiner allegedly determined Dibble had trouble lifting weights of more than 25 pounds.

“This situation is all of Sgt. Dibble’s making, but not uncommon in the workers compensation context,” Beverly Hills City Attorney Laurence Wiener said in a statement. “He was working without restrictions after his 2018 motorcycle accident and was even promoted to sergeant during that time. Then he requested an opinion from a qualified medical examiner in order to obtain a partial permanent disability award. The qualified medical examiner issued an opinion that he could not lift more than 25 pounds on a ‘repetitive basis.’ A police officer’s gun belt normally weighs approximately 20 to 30 pounds. Sgt. Dibble was then put on leave, with pay, while we sorted out what the doctor meant by ‘repetitive basis.’ Sgt. Dibble has now returned to work.”

Gage acknowledged Dibble had been in a motorcycle accident while on duty and recovered, and the qualified medical examiner’s determination should not have been sufficient basis to place him on leave. Gage said it took threats of a lawsuit to prompt the city to reinstate him. The qualified medical examiner found he could not lift 25 pounds on a repetitive basis, but his job does not require that, which the city reinstating him confirms, Gage said.

Although Dibble is back on the job, Gage said the lawsuit seeks compensation to be determined for damages the sergeant experienced. He also said he wants to send a message that such actions by a police department can result in penalties, in an effort to prevent them from reoccurring with other employees.

“There have been 26 different people who have brought claims against the city,” said Gage, who has represented at least nine of the employees. “So far, there have been millions of dollars in settlements.”

Gage said Dibble has been with the department since 2014 and formerly served with another law enforcement department.

[…] The latest lawsuit against Spagnoli and the City was filed in the LA Superior Court on March 30 in which Sgt. Scott Dibble alleges harassment and retaliation. […]