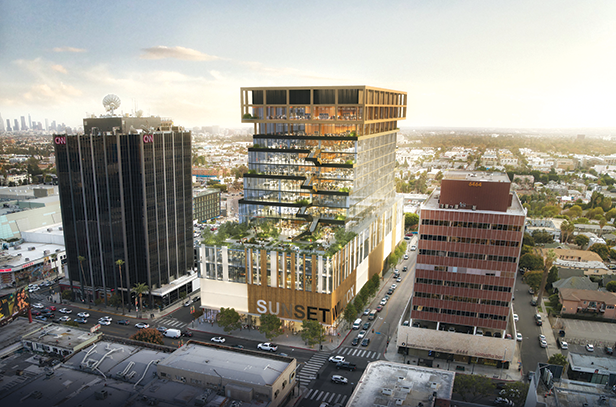 While much of the new development in Hollywood is planned for residential use, a new project proposed by Seward Partners LLC would create a 14-story building that will be primarily used for office space.

Seward Partners filed plans with the city of Los Angeles last month to build the project, called Sunset + Wilcox, on a site currently occupied by the Staples office supply store at 6450 Sunset Blvd., at the corner of Wilcox Avenue. The existing building will be demolished.

“With the majority of this underutilized site being surface parking, Sunset + Wilcox provides a tremendous opportunity to further Hollywood’s ongoing transformation into a true live-work neighborhood,” said Mario Palumbo, managing director of Seward Partners, in a statement. “Hollywood is world-renowned for its association with the entertainment industry, and the demand for new creative office space in the area is substantial.”

Floors two through 14 will provide office space for the “technology, entertainment and new media tenants who are the primary tenants driving demand in this area,” said project spokesman Brian Lewis of Marathon Communications. Spe­cific companies, however, have not yet been identified.

“Being so early in the process, it would be premature to consider specific tenants, though we are open to any options that will strengthen the Hollywood community,” he said.

Palumbo added that the developers want to “retain existing Hollywood businesses and attract new businesses that have to-date overlooked the area because of a lack of supply.”

“With this large site, we see an opportunity to create a truly exceptional creative office experience in the heart of Hollywood,” he said.

The project site is in Los Angeles Council District 13, and City Councilman Mitch O’Farrell said he is “excited” about the planned office building.

“It’s sitting at the urban core of Hollywood. It’ll be surrounded by already existing mid-rise buildings. I’m excited about the really great construction jobs it’ll provide – in this economy especially – not to mention the permanent jobs. That’s a real plus. Hollywood is officially underserved with creative office space; it’ll fulfill a gap there,” he said.

O’Farrell also praised the design of the project by Gensler.

Renderings show the project to be slightly larger than the adjacent CNN building at Sunset and Cahuenga boulevards. The building’s first five floors will all be the same size, though starting at the sixth floor, the levels will be set back from the Sunset Boulevard side of the building to create a 10,000-square-foot outdoor common area atop the fifth floor. Floors seven through 14 will be terraced to provide more outdoor space on each floor.

“It’s a really great modern design that will be complementary in the neighborhood where it will be constructed,” O’Farrell said.

Though plans have been filed with the city, the ongoing coronavirus pandemic makes anticipating dates for approvals and construction difficult, Lewis said.

“It’s way too early to project a timeline, especially these days,” Lewis said.