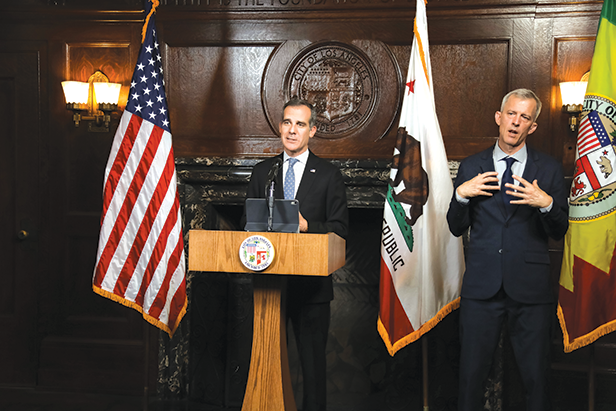 Garcetti signed an emergency order halting new rent increases on residential units that are subject to the city’s Rent Stabilization Ordinance. The order applies to approximately 624,000 rent stabilized units in 118,000 properties citywide, Garcetti said. Tenants in those units will not be subject to any new rent increases for 60 days after the expiration of the local emergency order, which lasts through April 19 but is subject to continuation.

Garcetti also signed an order halting evictions of residential and commercial tenants during the public health emergency based on a motion that was approved at a special Los Angeles City Council meeting on March 27 that lasted 11 hours. The new order allows renters to stay in their homes and gives residential tenants unable to pay rent because of the coronavirus emergency 12 months to repay, and commercial tenants three months to repay missed rent payments after the public health emergency order expires.

“This is a common-sense action to help tenants stay in their homes,” Garcetti said. “Angelenos who have lost hours or been laid off, or can’t work as a result of a COVID-19 diagnosis, should not face the extra burden of a spike in their rent.”

The latest orders build on previous protections in place for tenants, including a moratorium on utility disconnection by the Los Angeles Department of Water and Power. Local lawmakers supported the suspension of rent increases, including Councilmen Mitch O’Farrell, 13th District; Paul Koretz, 5th District; and David Ryu, 4th District. Ryu had sought such a ban at the March 27 City Council meeting, but the motion was not considered because of council procedural rules, according to the Los Angeles City Attorney’s Office.

“The mayor’s action will save thousands of renters and working families in Los Angeles from a rent increase that is unfair, unjust and unconscionable during this pandemic. I thank Mayor Garcetti for his decisive action to protect renters,” Ryu said. “This is the kind of action we need in a city where the majority of people rent their homes, and we must do more. I am going to continue working to freeze all rent increases across the city of Los Angeles, suspend rent and mortgage payments across California and protect the working families and small business owners that are the backbone of our economy.”

Following the City Council meeting on March 27, Ryu was critical of the City Attorney’s Office for not allowing a motion to freeze rent increases from being heard. The council was unable to consider Ryu’s motion because doing so would have violated a transparency rule that notifies residents about proposed changes to laws so they can provide input, said Los Angeles City Attorney’s Office Spokesman Rob Wilcox.

“The City Attorney’s Office stepped in to assure that rule was upheld and public participation protected,” Wilcox said. “Standing up for vulnerable tenants in their time of greatest need is vital. So is ensuring transparency in city government. At this urgent moment, City Attorney [Mike] Feuer will continue to do all in his power to accomplish both.”

Ryu said he plans to reintroduce a motion calling for a rent increase freeze at all residential and commercial buildings at the next City Council meeting. Council meetings were canceled this week, and the next meeting has not yet been scheduled.

Ryu also called on Gov. Gavin Newsom to suspend rent payments, which has not yet occurred. That decision must be made at the state level because the Costa Hawkins Rental Housing Act limits the ability of local municipalities to impose such laws. Additionally, he urged U.S. Rep. Maxine Waters (D-Los Angeles), chair of the House Financial Services Committee, to introduce legislation ensuring rent and mortgage forgiveness for the millions of renters, homeowners and commercial property owners impacted by the coronavirus pandemic.

“April 1 is tough enough, but by May 1, we are going to have millions of people unable to pay their bills through no fault of their own,” Ryu added. “Suspending rent payments is absolutely central to keeping people from total financial ruin during this pandemic.”

Anyone who can pay rent is still required to do so. The Los Angeles Housing + Community Investment Department has established a hotline to assist renters who have been economically impacted by the pandemic at (866)557-7368.

The City Council also considered and approved many other measures at its last meeting. Included was a prohibition on fees for people who miss paying rent during the public health emergency. O’Farrell is also working on a more comprehensive rent freeze that may be considered later that will be linked to a freeze on mortgage payments.

“These freezes must happen together, so that non-payment of rent does not result in a default on the property itself, which could result in further economic chaos and the evictions,” O’Farrell said. “We need the partnership of our state and federal governments as well as the private sector to make this happen.”

A motion by Koretz that requires large grocery stores and food retailers to allow one hour for seniors and disabled individuals to shop before the general public was also approved. Ralphs, Vons, Pavilions and Whole Foods stores will open from 7 to 8 a.m. for older adults. Target will open early for seniors from 7 to 8 a.m. on Wednesdays. For a complete list, visit councilmemberpaulkoretz.com. Additional resources for seniors are available from the Los Angeles Department of Aging by visiting aging.lacity.org.

Testing is available for people 65 or older with symptoms, people with symptoms who have underlying chronic health conditions and those who are subject to a mandatory 14-day quarantine period due to a confirmed COVID-19 exposure. For information about testing and other COVID-19 measures in the city of Los Angeles, visit corona-virus.la.