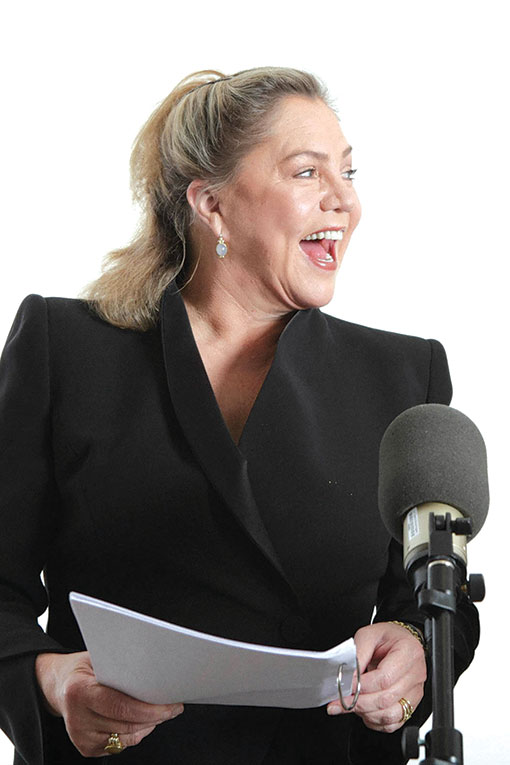 Actress Kathleen Turner, who performs in the broadcast of “The Graduate,” records at LATW’s studio. (photo by Derek Hutchison/courtesy of Los Angeles Theatre Works)

Venues everywhere are closed during this health crisis, but L.A. Theatre Works offers performances just a click away.

LATW provides audiences around the globe free access to recording of both contemporary and classic plays, each performed by leading actors of the stage and screen. LATW productions air weekly by radio stations such as KPFK 90.7 in Los Angles, and across the U.S. and internationally.

Every Saturday audiences can stream that week’s broadcast online for free, along with other shows from previous weeks.

“The Graduate” with Matthew Rhys and Kathleen Turner is currently streaming on LATW’s website at latw.org/broadcasts#recent. LATW will also stream “Misalliance” by George Bernard Shaw on May 2, “Six Degrees of Separation” by  John Guare on May 9, “Act One” by James Lapine on May 16, “Table Manners” by Alan Ayckbourn on May 23, and “The Goodbye Girl” by Neil Simon on May 30.

Listeners can hear additional titles by subscribing for free to LATW’s podcasts on Apple Podcasts, Stitcher, Spotify, and NPR One. Some of the titles available in May include “Mizlansky/Zilinsky,” a comedy by Jon Robin Baitz about two Hollywood con men trying to hatch one last grand scheme, starring Nathan Lane, Richard Masur, Rob Morrow and Harry Shearer; “Fabulation, or the Re-Education of Undine,” a darkly rags-to-riches-to-rags by Pulitzer Prize-winner Lynn Nottage that stars Charlayne Woodard.

Free access to more than 30 science-themed plays from LATW’s “Relativity Series” is also included as part of its programming. Titles include award winning plays such as “Arcadia” by Tom Stoppard, starring Kate Burton and Gergory Itzin, and “Photography 51” by Anna Ziegler starring Miriam Margolyes, Matthew Arkin and Maxwell Caulfield.

The “Relativity Series” is funded by the Alfred P. Sloan Foundation which aims to bridge science and the arts in the modern world. The plays in this series present science as a thoroughly human endeavor, bringing to life the people and stories behind the research and invention that shape society. For people interested in streaming these plays from the series, visit latw.org/relativity-series.

“We look forward to the day when audiences can gather to experience the magic of live theater again,” said Susan Loewenberg, producing artistic director. “Until then, put on your headphones and immerse yourself in all that LATW has to offer.”

Additionally, LATW is reaching out to support nonprofit organizations across the country by supplying a choice of targeted recording each company can offer to its constituents.