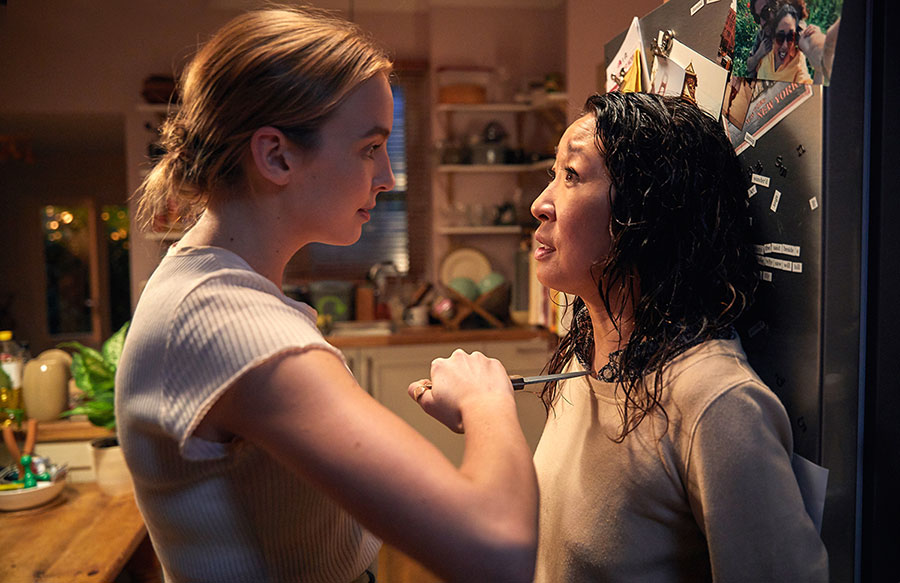 In these confusing times, why not bask in a series just as morally confounding. Meet BBC America’s “Killing Eve,” based on the “Villanelle” spy novels by Luke Jennings. Unlike other espionage thrillers, this series delights in more than high-stakes ticking time bomb scenarios. It’s really a love story – a pathological love story between agent and assassin, complete with pools of blood and oh-so-proper British decorum.

The spy game doesn’t cut it for M15 agent Eve Polastri (Sandra Oh). She endures too many emergency meetings being talked over, ignored. In her spare time, she researches a string of murders with the same M.O.: a female assassin. That might’ve annoyed her former boss, but British intelligence legend Carolyn Martins (Fiona Shaw) sees Eve’s brilliance and recruits her into an elite M16 unit focused on an assassin codenamed Villanelle (Jodie Comer) and whomever employs her.

As for Vill, she enjoys a posh life, always ready for the next target from her handler Konstantin (Kim Bodnia), the only paternal figure in Vill’s life. And, he has an exhausting job, ensuring Vill doesn’t go off script, kill anyone else or anger the higher ups, whomever they may be. Of course, Vill and Eve meet several times across the first two season’s 16 episodes (no spoilers here on when or if that occurs in season 3), and fireworks will fly. Actually, it’s more blood spatter, as Vill does her thing. Eve remains fascinated by the entire process, addicted to her new job and Vill’s actions.

Each season remains connected, though the storyline drifts away from its central focus in season 2, exploring a subplot entirely designed to expand the agent-assassin exchanges. So far, both season finales go big, though the first one is impossible to top. That’s OK. The latest season continues through May, with a fourth already confirmed.

“Eve” is a special kind of black comedy. Vill’s fatal antics never appear normal, but the soundtrack’s astute timing juxtaposes such moments remarkably well. Beyond mechanics, Comer’s Villanelle seems to mark every vicious moment with the perfectly timed face: a smirk here, raised eyes there, and always a cavalier one-liner. 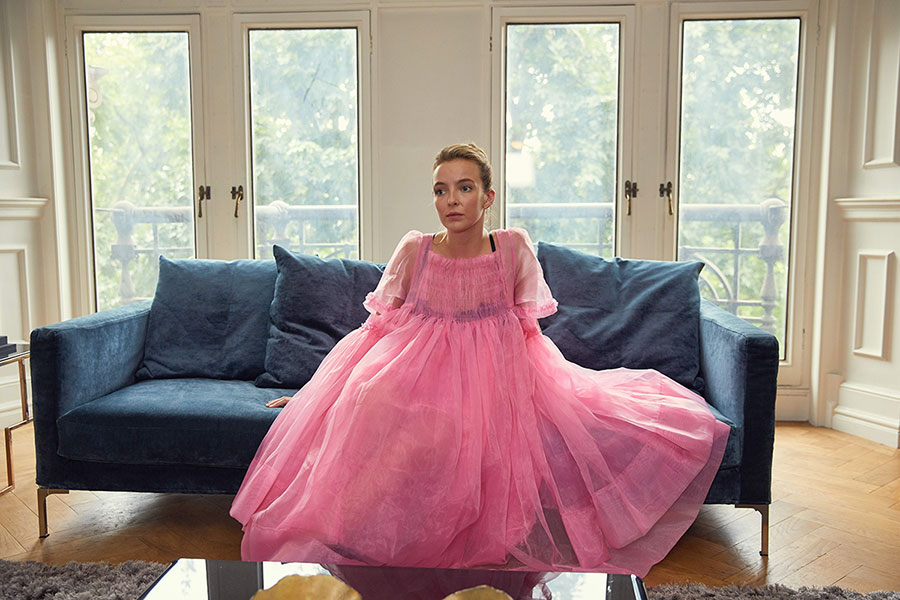 Jodie Comer plays Villanelle, who is both charming and deadly. (photo courtesy of BBC America)

“Killing Eve” might not seem to cover new ground, but it drastically differs from its spy thriller kin by emphasizing each character’s fixation on each other and the boredom they feel for almost everything else. Sure, the ethics and merits of torture, surveillance or deep cover make a few cameos, but it’s the obsession at the cost of social norms (good people don’t normally flock to murderers, preferring a Five-O call instead). Half the fun is witnessing the push and pull between them, though Eve – as the series title implies – must sacrifice far more, at least mentally.

Oh is killer as the title protagonist. The “Grey’s Anatomy” alum clearly goes through the most prominent character evolution through the series, and the Golden Globes noticed in 2019 with a best actress in a dramatic TV series nod. Once a timid agent, she becomes a commanding presence as a leader and liberated character.

But across two seasons, she doesn’t really know what she wants. Colleagues die, and intelligence politics complicate matters. Hence, she dances between repression and finding release in perhaps unsavory ways.

Comer plays the part splendidly. Villanelle has no redeeming qualities: spoiled, easily bored, disrespectful and at peace with killing anyone for anything. But she does it with a particular charm and confidence for days. That’s all thanks to Comer’s incredible performance, earning her an Emmy last year and a BAFTA award in 2018.

And, to discuss “Eve” without mention of Shaw – also known as Harry Potter’s aunt – does her a disservice. Her casual demeanor around dead bodies or when discussing vile matters is the most British thing about the series, especially when she asks Eve to imagine her yelling instead of actually doing so.

The unseen heroine, however, is creator Phoebe Waller-Bridge, star of “Solo” and Amazon Prime’s “Fleabag,” another series she created. Her approach to the book adaptation, supported by an amazing writers’ room, culminates in one of the most morally compromising love-hate relationships on the small screen. Forget the tired cognitive dissonance of an undercover cop befriending a Boston mob boss. The real work suspending disbelief belongs to Eve and Vill, 007-level conspiracy at place.

Double agents, clever kills, spy tech and a computer wiz (Sean Delaney) all place “Eve” firmly in the spy show category. But “Killing Eve” is so much more, somehow fun and intense, playful and compelling.