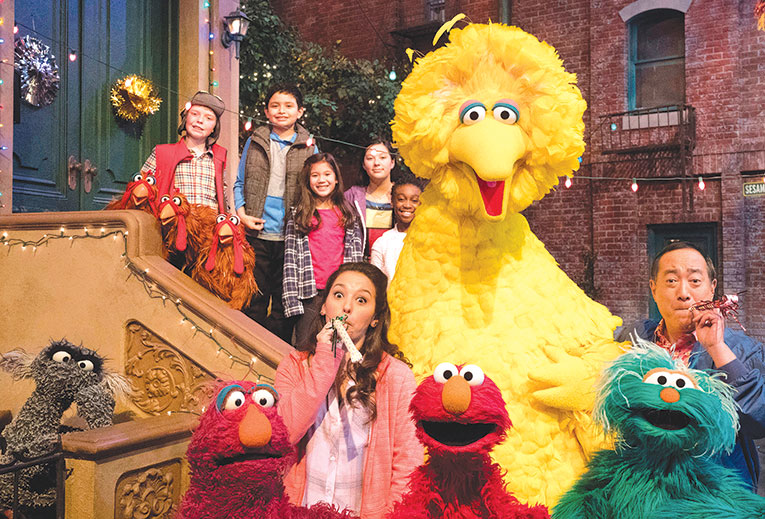 “Sesame Street” is part of the stream of children’s programming available for enrichment at home. (photo courtesy of HBO)

As for our only remaining export, media, I can’t say staying at home has gifted me more free time to immerse myself in all those AFI 100 classics hidden on Amazon Prime, or the grip of original horror flicks Hulu pumps out.

My 2-year-olds won’t stand for cultural enrichment or base escapism. Instead, my house survives on a steady diet of children’s programing thanks to many streaming platforms. The only option to remain critically sharp is a newfound literalism. Every kids show and children’s film takes on new life once you take everything literally.

I swear to the king of Grouchland, if I hear a request for “da Elmo” one more time, I will turn that show on and watch it, because I fear my kids. As “Sesame Street” (Hulu, Prime, YouTube, HBO Now) intake reaches all-time highs – and I’ve got mad love for the house of Henson – I notice things previously unseen. Elmo laughs at everything and talks about himself in third person. That’s disconcerting.

And all those talking vegetables are about to have a brutal lesson in mortality once they go home with Grover from the market. It’s like no one saw “Sausage Party” (Hulu Live TV, but don’t watch with kids).

Quarantine only exacerbates my mild allergy to the menu of options consumed daily. On “Daniel Tiger’s Neighborhood” (PBS Kids, Prime), that red-coated cub’s overreactions to childish concerns no longer feel endearing. Now, that show makes me want to contribute my own life-lesson song: “When you feel so mad that you wanna roar, fear Joe Exotic, and his Colt M4.”

But “Little D,” his actual nickname, isn’t alone. Meet the death cult “Ready, Steady, Wiggle” (Hulu). I watch mortified as they sing their incantations that so effectively lull children into submission, creating songs that resonate in my mind hours later like too much garlic in spaghetti sauce (if you remember Prego, of course). And those talking construction vehicles on “Terrific Trucks” (Hulu) – the youngest hoping he’ll be able to scoop as well the big dogs. That will never happen because he’s a truck with no organic parts that allow him to grow.

Disney is a unique recipe of grim, if literally interpreted (all that follow on Disney+). Recall “Toy Story 2’s” mid-credits spoof scene featuring a couple characters from “A Bug’s Life” getting pummeled as Buzz Lightyear walks through a field: they’re dead. Buzz murdered his Pixar kin. And, remember “Tangled’s” Rapunzel? Well, her parents sucked at ruling a kingdom. Flynn Rider almost lost his head for stealing a crown. That’s some grade-A classist punishment. So, when the film ends with a narration that the blond-turned-brunette rules with the same “grace and wisdom” as mom and pops, “Tangled” reveals its bleak outlook: she continues the same barbarism practiced by her parents, assuming she doesn’t fall in love with any other criminals.

I try to branch out. New arrivals like “Onward” and even Tim Burton’s “Frankenweenie” premiered with a 50% success rate. The remake of “Pete’s Dragon” outdoes the painfully dated original, but it revolves around an eerie truth behind so much Disney fare: dead parents. Why does Disney hate the parents who take their kids to see all those films?

Peculiar breaks with reality abound across other films and shows, literally speaking. All the rats sanitized in “Ratatouille” – dead. Fish flushed in “Finding Nemo – meet the filtration system. “Doc McStuffins,” featuring a toy veterinarian who can speak to her dolls, action figures and stuffed animals – a journey through a young girl’s break with reality. And don’t even mention “The Mickey Mouse Club House” and the mechanics behind that house, that is unless you’re my son adorably saying, “mouse” – slays me every time.

As I sit in my house, Cheese-Its pepper the floor like the tombs Scrooge McDuck and Co. traverse in the new and very improved “DuckTales.” I know I can’t complain that much. Stir crazy isn’t the same as what others must endure right now. I also have newfound respect for my parents. When “Aladdin” came out on VHS, that movie played for two weeks straight. And my twin boys aren’t the problem. They play with each other quite well, and my superpower of finding Imaginext toys has finally paid off.

The real anxiety lies beyond the small screen in my living room. While that cartoon villain running things in D.C. continues to play catchup, I remain thankful my kids won’t remember him or all of this. They already have enough to worry about when Woody and the gang confront an incinerator.

Instead, they’ll know they were protected and will learn how to better help others in the future. You know, apply the valuable life lessons found in all those shows driving me mad right now, a concept lost on all the Mr. Burns out there.