Hollywood Partnership to light up Tinseltown 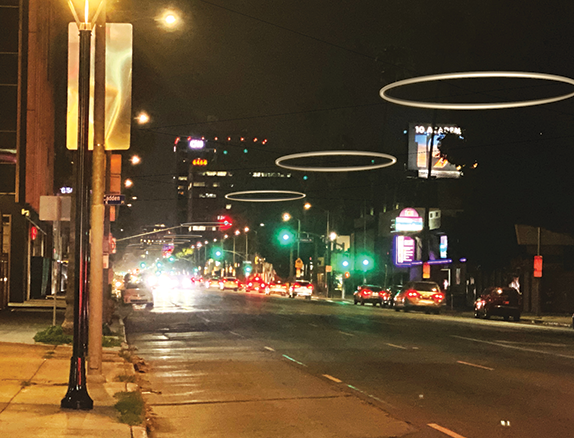 In the plan, which was drafted by Long Beach-based Lighting Design Alliance, the Hollywood Partnership seeks to capture the theatric allure of world-famous Hollywood by highlighting its historic features, enabling positive ambient experiences and increasing overall lighting to improve perception of public safety.

“Following the completion of the Cahuenga Street festoon lights in 2019, we received an overwhelmingly positive response from the community,” said Kristopher Larson, president and CEO of the Hollywood Partnership. “We looked at that project as an important pilot which demonstrated the power and opportunity that lights can add to buildings, streetscapes and corridors. We wanted to do more across the community with future projects each responding to their unique context and conditions.”

While the Hollywood Lighting Master Plan includes numerous recommendations for lighting installations, the Hollywood Partnership’s Place Enhancement Committee has selected the first three initiatives they hope to implement in the coming years.

The first initiative will be to revive the four existing Skytracker klieg lights located at the intersection of Hollywood and Vine. Installed by the Community Redevelopment Agency in the 1990s, the four Skytrackers on marble plinths will be replaced with modern technology that will require less maintenance.

Large-scale suspended street lanterns will be installed on a catenary system over the center of the street to maintain the recommended illuminance levels in the center of Hollywood Boulevard.

“The Hollywood Partnership’s Lighting Master Plan goes hand-in-hand with my Heart of Hollywood initiative and the Walk of Fame Master Plan,” O’Farrell said. “This collaborative effort will improve the quality of life for Hollywood’s diverse residential and business community, and help to realize the vision of Hollywood as a place where experiences exceed expectations.”

The third project is the installation of catenary lights over the center of Sunset Boulevard, where color-changing, sun-shaped fixtures will suggest the sun in movement across the sky.

It is expected that funding for these projects would come from the Hollywood Partnership, which manages the Hollywood Entertainment District, a property-based improvement district, plus other public and private sources.