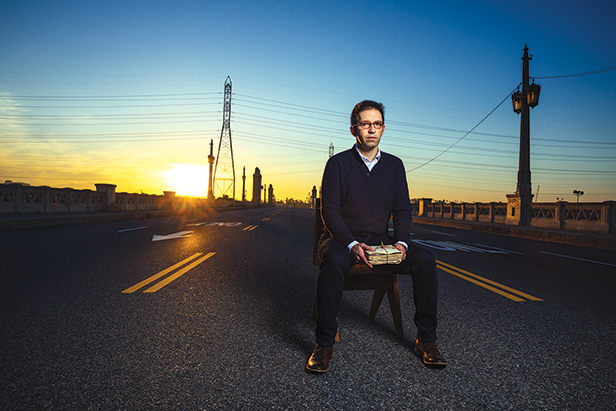 Helder Guimarães in the Geffen Stayhouse production of “The Present.” (photo by Jeff Lorch/courtesy of the Geffen Playhouse)

The Geffen Playhouse announced the premiere of “The Present,” a live, virtual and interactive theatrical experience written and performed by Geffen alum Helder Guimarães.

“The Present,” inspired by Guimarães’ life experience with quarantine during childhood, used illusions to lead an audience through a story of lessons Guimarães learned when he least expected it.

The performance can be seen online through a secure platform with a maximum of 25 participants per show. Each participant will be mailed a sealed mystery package in advance, the contents of which will only be revealed during the course of each performance as the story unfolds.

Previews for “The Present” begin May 7-13 and opening night is on May 14. The 45-minute production will run through June.

“The Geffen knows that theatre can survive—and flourish—even in the most challenging of times, and so we are proud to present ‘The Present’— our first full virtual production,” said Matt Shakman, Geffen Playhouse artistic director. “Led by the charismatic and brilliant Helder Guimarães, this is a true play in every sense. A mysterious package arrives at your door. You pour a glass of wine, dim the lights, and settle into your favorite chair. Theatre is alive and you didn’t have to leave your house.”

Guimarães said there is something fun about overcoming obstacles with creativity.

“While theater isn’t happening in the room we usually physically share, it lives in the spectators’ mind, in their emotions and in their perceptions. That’s what we want to connect with,” Guimarães said.

“The Present” marks the second collaborative effort between Guimarães and Marshall, who first worked together on “Invisible Tango,” which made its world premiere May 7, 2019, as part of the Geffen Playhouse 2018/2019 season.

“In these extraordinary times, I’m very excited to be collaborating again with Helder and the Geffen to bring a new magical experience to the audience in an innovative way,” Marshall said.

Hotel has a heart for community