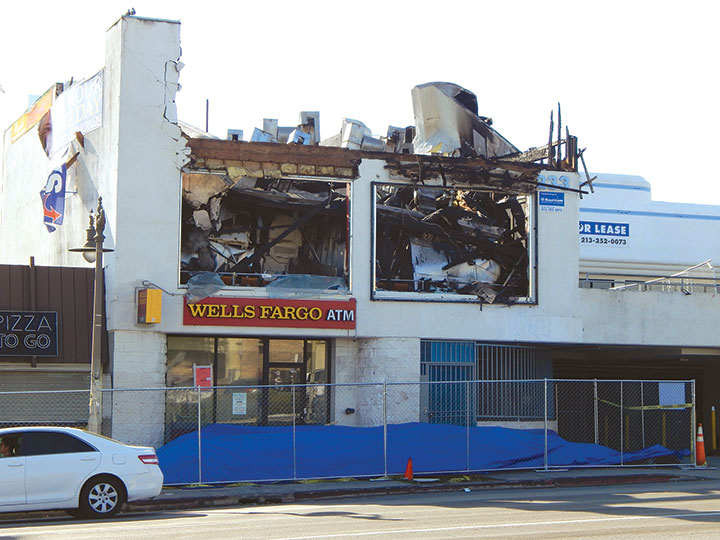 A fire on March 28 caused heavy damage to a Koreatown restaurant. (photo by Edwin Folven)

The fires were unrelated, and no injuries were reported. The first occurred at approximately 11:45 p.m. on March 28 in the Bak Kung 2 Korean barbecue restaurant at 233 S. Vermont Ave. The second-story restaurant was closed, and the cause remains under investigation. Firefighters arrived to find flames coming from the roof, which later partially collapsed and hampered efforts to extinguish the blaze, Los Angeles Fire Department spokeswoman Margaret Stewart said. The fire was extinguished in one hour and 16 minutes and was primarily contained to the restaurant space. A storefront housing a Wells Fargo ATM on the first floor below the restaurant was designated uninhabitable, as was a vacant space.

LAFD personnel also responded to a fire in a vacant apartment building off an alley in the 900 block of N. El Centro Ave. in Hollywood at approximately 7:40 a.m. on March 29. The fire was extinguished in 19 minutes and confined to the second-floor of the building.

At approximately 3:35 p.m. on March 29, firefighters were called to a blaze at 5542 W. Romaine St. The fire erupted in a back house but spread to a one-story single-family home in front. The fire was extinguished in 21 minutes. Both structures sustained significant damage and were designated uninhabitable. The cause remains under investigation. No damage or loss estimate was provided for any of the three fires.

Of course, we need to talk about ‘Tiger King’