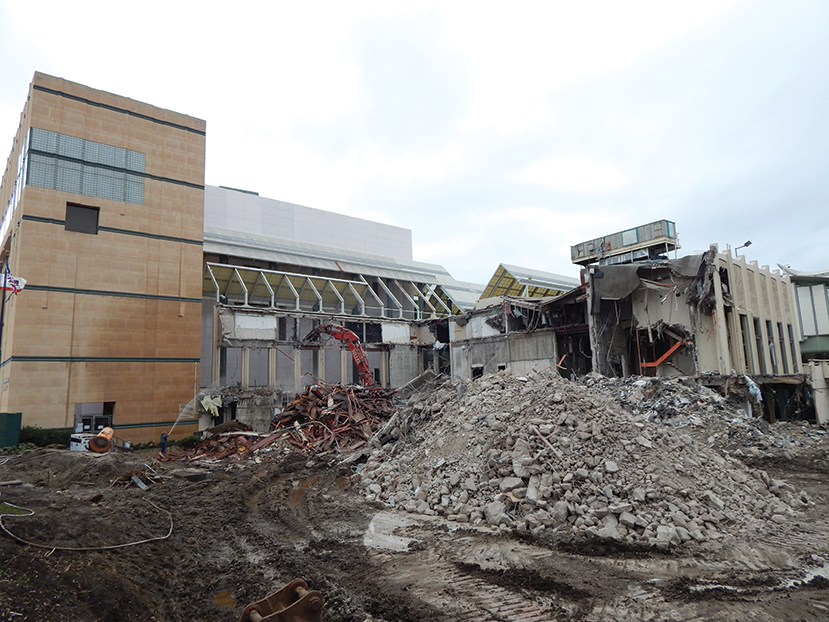 The Leo S. Bing Center is being demolished on LACMA’s campus, and three other buildings are soon to follow. (photo by Edwin Folven)

Demolition of the Leo S. Bing Center is underway, and demolition of the Ahmanson, Art of the Americas and Hammer buildings “will be completed in parallel and the work will take several months,” the museum said in a statement provided by spokeswoman Jessica Youn.

The new building, which was designed by Swiss architect Peter Zumthor, was unanimously approved by the Los Angeles County Board of Supervisors a year ago and received the necessary permission from the Los Angeles City Council to span Wilshire Boulevard in December.

In an April 9 post on LACMA’s blog Unframed, the museum said it is working to keep neighbors informed and respond to any concerns while construction “is continuing on schedule.”

“All of the enabling activities required in advance of construction were completed before the coronavirus crisis unfolded, allowing us to continue hazmat abatement and internal demolition and proceed with hard demolition as planned,” the blog post said.

In its statement, the museum pointed out that construction is considered an essential activity by the city and county, and “the county has strongly urged us to continue moving forward in our work in the construction of our new building.”

“Clark Construction are currently practicing safety precaution measures on the construction site that are in accordance with city, county, state and CDC guidelines,” the museum’s statement said.

The museum added that the demolition work will be done “in accordance with government guidelines,” including the use of “full protective gear, enhanced cleaning protocols and social distancing rules.”

Greg Goldin, a co-founder of the Citizens Brigade to Save LACMA, which opposes the new building, said during the pandemic, construction should be halted on the project.

“On a personal level, I find it enormously hurtful. The Bing auditorium is gone. I can’t put it exactly into words, but it just feels as if an essential cultural landmark is being shredded in our city in the middle of the crisis that has undermined our confidence and our sense of worth as a place across the board. At a moment where our institutions need to be strongest, we’re tearing one down,” Goldin said.

Goldin said his group opposed the construction of the new building because of its smaller size and the way the new building will force LACMA’s art to be presented all together on one floor, instead of organized into departments and collections.

Joseph Giovannini, an architect and architecture critic who works with the Citizens Brigade, published a series of articles in the Los Angeles Review of Books criticizing the LACMA building and LACMA Director Michael Govan. He said based on his interviews with architects and developers, it’s likely that construction costs have increased since the project was first proposed. If the museum’s funding falls short, taxpayers may have to fund the rest of the building during a possible recession, Giovannini claims.

Goldin said the Citizens Brigade is hosting an architectural competition for the new LACMA building, and according to Goldin, 70 architecture firms entered their designs, which can either include the four existing buildings or start with the blank slate that would be created by the four buildings’ demolition.

The competition has not been sanctioned by Los Angeles County.

The museum’s blog post also said that in the midst of the pandemic, “there is an unquantifiable benefit for LACMA to reaffirm our commitment to our mission and our community by moving forward with the building project.” Not only does the construction create jobs – up to 4,000 jobs over the next four years, by the museum’s count – but the museum has garnered almost 90% of the pledges needed for the building’s $650 million capital campaign, the blog post added.

“LACMA’s board of trustees recently reaffirmed its commitment to the project, recognizing that our new building is a powerful and visible signal to Los Angeles of renewed vitality and an engine for recovery after this crisis,” the blog post said.

‘Trolls World Tour’ sells out, in a bad way