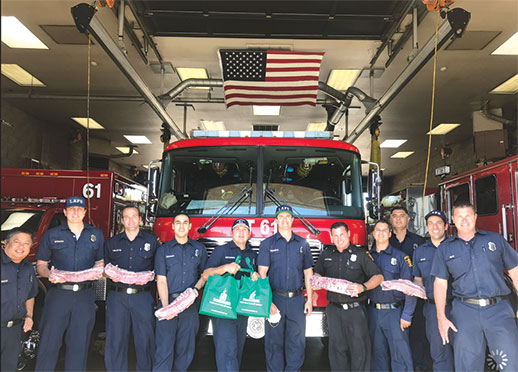 Firefighters at Fire Station 61 enjoyed ribs from Huntington Meats & Poultry on Tuesday as part of the Firehouse Dinners program. (photo courtesy of the First-In Fire Foundation)

Personnel at Los Angeles Fire Department’s Station 61 on Third Street are eating well and have one less thing to worry about during the COVID-19 emergency under the Firehouse Dinners pilot program, launched this week by the First-In Fire Foundation, the Original Farmers Market and City Councilman David Ryu, 4th District.

Ryu’s office and the First-In Fire Foundation are providing funds for groceries and prepared meals for the firefighters purchased from merchants at the Original Farmers Market, corner of Third and Fairfax. The program helps first responders and small businesses at the Farmers Market at the same time, Ryu said.

“Our first responders are working around the clock to keep Angelenos safe during this pandemic. They need hearty, nutritious meals and our local restaurants need the support,” Ryu said. “Through the great partnership of the First-In Fire Foundation and the Original Farmers Market, we’ve been able to put our local businesses to work feeding our firefighters.”

On Tuesday, the firefighters picked up ribs for dinner from Huntington Meats & Poultry at the Farmers Market, First-In Fire Foundation President Lyn Cohen said. She added the organization will continue to provide funding for the personnel to buy groceries and prepared meals on a regular basis. An initial $5,000 came from discretionary funding in Ryu’s office, spokesman Mark Pampanin said. The First-In Fire Foundation is also raising funds to sustain the program and expand it to other fire stations.

“It’s a tough time for everyone right now and we are grateful,” said Deputy Chief Ronnie Villanueva, of the LAFD’s Operations South Bureau, which includes Fire Station 61 serving the Miracle Mile. “It takes a little more time to train every day with all the new information that comes out about the emergency, so everything helps. It can be a little burdensome going to the store and shopping like we normally do. And, it also helps the small businesses in the area. It’s a win-win for everyone.”

Cohen is making arrangements for more Firehouse Dinners with restaurants and grocers at the Farmers Market including Huntington Meats & Poultry, Du-Par’s and Monsieur Marcel. Many of the markets’ restaurants remain open and are offering take-out and delivery.

Cohen said the Firehouse Dinners program is a natural continuation of efforts the First-In Fire Foundation has made to improve conditions at local fire stations. The grassroots organization has previously planted gardens and landscaping at fire stations and has raised money for supplies and necessities not covered by city funds.

“Now, more than ever before, a community-fire department partnership matters,” Cohen said. “Our mission is bonding local citizens with their local firefighters, and vice versa. Central to our work is relationship and friendship, team building and collaboration at grassroots as a form of emergency preparedness, common ground work for weathering the storm together. Firefighters traditionally shop, cook and pay for their own dinners themselves, but right now our firefighters are safer to serve us out of grocery store lines. With this pilot [program], and the support of Councilmember Ryu, we can have their back and support local small merchants by simply dining.”

Anyone interested in supporting the project is asked to visit firstinfirefoundation.org.