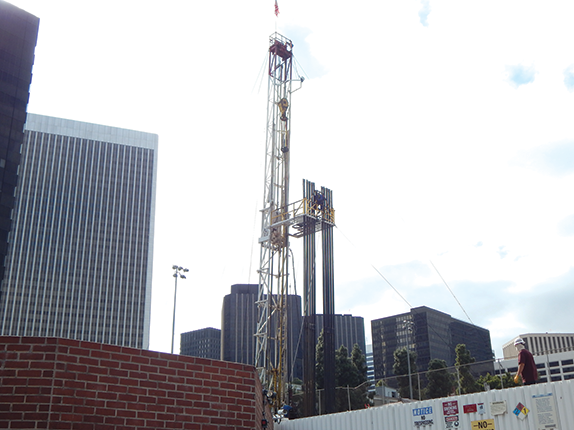 Beverly Hills city officials hope all of the oil wells at Beverly Hills High School will be capped later this year. (photo by Edwin Folven)

As part of its consent calendar on March 31, the Beverly Hills City Council unanimously approved what is expected to be the final allocation of funds for plugging 19 oil wells on the Beverly Hills High School campus.

To date, 16 wells have been capped and are now abandoned, and work continues on the 17th well. The city hopes to finish the entire project by October, according to Beverly Hills Director of Public Works Shana Epstein.

The city’s March payment – $7 million from the general fund – will be reimbursed by the Beverly Hills Unified School District, as the city reached its maximum $11 million contribution months ago, Epstein said. The rest of the funds for the project, which city staff estimated to be approximately $37.8 million, will be the responsibility of the school district. The school district did not make a representative available for an interview or provide a comment before press deadline.

The issue arose in 2017, when oil company Venoco filed for bankruptcy in the U.S. Bankruptcy Court for the District of Delaware, and Judge Kevin Gross allowed the company to leave the wells without decommissioning them in accordance with local and state laws.

“This is an instance in which, because the operator of the well declared bankruptcy and there weren’t sufficient funds in the account of the bankrupt party to pay for it, the city and school district had to step in to make sure things were safe for the city. It’s a lot of money to bear, but we had to do it because it’s a safety issue,” Vice Mayor Robert Wunderlich said.

The original estimate for plugging the 19 wells was about $8 million total, Epstein said, though that cost has risen as work has been conducted.

“When you go and start plugging a well, you never know what you’re going to find,” Epstein said. “It’s thousands and thousands of feet deep. You have to remove as much [mud and debris] as possible before you start plugging it. That’s what adds to the cost, what you find and how easy it is to either remove it or grind it down.”

Vice Mayor Robert Wunderlich said he and the city will both be happy when the years-long project concludes.

“At this point, we have encountered difficulties more than once with one or more of the wells, so I don’t think it’s necessarily a given that some of these difficulties may not be encountered again,” Wunderlich said. “We’re hopeful that it’s coming to an end, and if things go smoothly, it will, but past history tells us that sometimes we encounter difficulties.”

Epstein said the project has not experienced any coronavirus-related delays, as most of the oil well supplies were already on hand before the pandemic struck. She also praised BHUSD for working with the city on the oil well project.

“We’ve had a nice working relationship with the school district to try to resolve this issue. It’s unfortunate that this was not part of what Venoco was responsible for in their bankruptcy,” Epstein said.