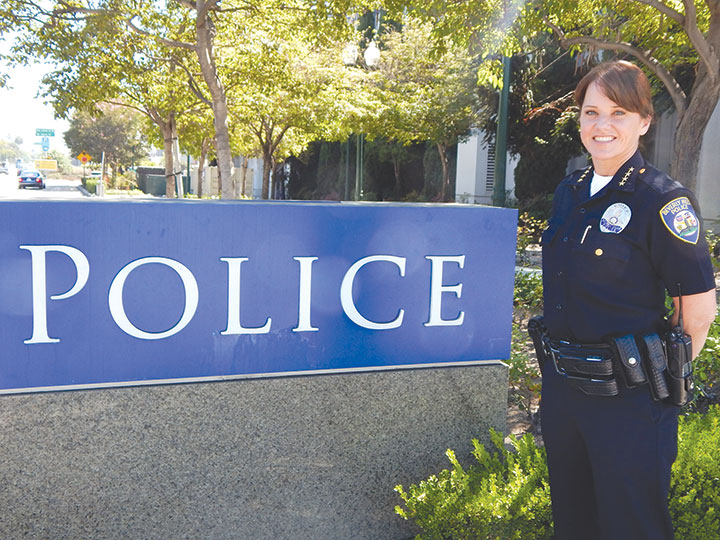 Beverly Hills Police Chief Sandra Spagnoli, shown in 2016, announced she will be retiring from the department effective May 15. (photo by Edwin Folven)

Beverly Hills Police Department Chief Sandra Spagnoli abruptly announced her retirement on April 25, capping a four-year tenure in which numerous lawsuits were filed against her and the city by officers and other personnel alleging retaliation and harassment.

Spagnoli informed Beverly Hills City Manager George Chavez of her intention to retire, city spokesman Keith Sterling said. The city made the announcement last Saturday afternoon in a press release including statements from Chavez and Spagnoli.

“During the chief’s tenure, crime was reduced while the department increased diversity, public outreach, best practices and advancements in technology,” Chavez said. “We thank Chief Spagnoli for her service to our community and her three decades of public service in law enforcement.”

“I am grateful to have served Beverly Hills and proud of the accomplishments over the past four years to keep this world-class community one of the safest in the nation,” Spagnoli said.

Spagnoli, 52, was hired in 2016 after serving as chief of police departments in the cities of San Leandro and Benicia, located in the Bay Area. She had 26 years of law enforcement experience when hired by the city of Beverly Hills, which selected her to succeed former Police Chief David Snowden, who had retired nine months earlier.

A report in 2015 by an outside consulting firm identified issues with recruiting and morale in the department, and Spagnoli’s hiring was intended to bring a fresh approach to law enforcement in Beverly Hills. In an August 2016 interview with the Park Labrea News/Beverly Press shortly after she joined the department, Spagnoli stressed the need for being tough on crime while forging relationships and keeping the community informed.

Statistics published on the Beverly Hills Police Department’s website show overall crime decreased 14% from 2018 to 2019, with 1,589 crimes reported last year compared to 1,851 the previous year. However, the total number of crimes reported at the end of 2016 was 1,540, indicating crime slightly increased overall on the year Spagnoli first joined the department.

Controversy arose in 2018 when former Beverly Hills Police Department Capt. Mark Rosen reached a $2.3 million settlement with the city in a lawsuit claiming discrimination and retaliation. Rosen, a 45-year department veteran, immediately retired after the settlement was reached, said attorney Bradley Gage. The city of Beverly Hills issued a statement at the time that the settlement was agreed to on the advice of its insurance company.

The settlement with Rosen was followed by five others that were later reached in lawsuits filed against the city and Spagnoli by other employees alleging retaliation and harassment. A jury later overturned a $250,000 settlement awarded to one of the plaintiffs. In total, the settlements and legal fees cost the city approximately $8 million. On March 30, a police sergeant who had previously reached a settlement with the city over allegedly being passed up for promotion filed another lawsuit. The second suit claims the sergeant faced additional retaliation.

Gage, who represented many of the other officers and employees who filed lawsuits, including the sergeant who filed a new suit on March 30, said he was not surprised Spagnoli and the city of Beverly Hills are parting ways.

“The first question I had is, ‘What took so long,’” Gage said. “This has been piling on for a few years now.”

Spagnoli’s retirement becomes effective on May 15. Chavez is expected to name an interim chief in the coming weeks.