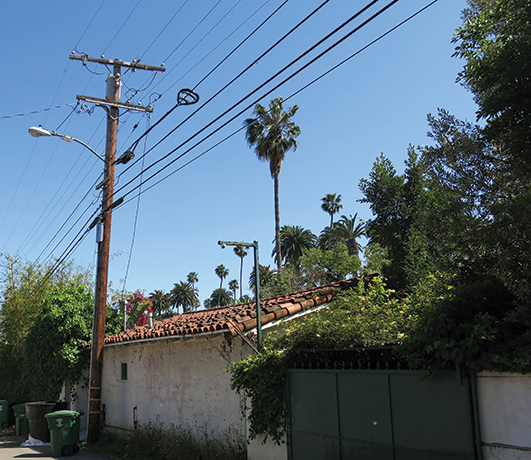 Some of the delays in the Fiber to the Premises project are due to the aerial phase, where fiber cables are hung from power poles. (photo by Cameron Kiszla)

Work will continue on the Beverly Hills Fiber to the Premises project for now, but its long-term prospects are in doubt due to delays, price increases and the coronavirus pandemic.

On April 21, the City Council unanimously authorized approximately $1.4 million in additional funding for three contracts related to Fiber to the Premises, which aims to provide high-bandwidth internet to residents and businesses in the city using fiber-optic cables, but not without some council members voicing their concerns.

Vice Mayor Robert Wunderlich noted that the “greatly troubled project” is expected to go “significantly” over budget and is likely to take far longer than originally anticipated. The city staff report notes that the project’s first two phases, which are ongoing and include the southeast and northwest portions of the city, are likely to go between 17% and 25% over budget.

Implementation of the aerial phase of the project – hanging fiber cables from power poles – could take between five and 12 more years, as opposed to 12 to 14 months under normal circumstances, the report said.

Part of the delay is due to the coronavirus pandemic, as some work to make Southern California Edison poles ready for fiber has been put on hold due to safety concerns.

“I’m not questioning the benefits of having this in place. I’m speaking about the reality of how difficult this has been to put it into place,” Wunderlich said. “I think we’re going to be facing a decision as to whether or not we’re going to complete this project in this form or in some other form.”

City staff said once these two phases are complete, Fiber to the Premises will benefit the city, even if no more work is done.

“Effectively, this extends our municipal area network where there was comparatively no network, and the network is the foundation for a lot of smart city things we’d want to do,” said David Schirmer, the city’s chief information officer.

“By finishing up this work … [the network] is usable, at least by the city for city purposes. Then we can put the project on hold until we get a better sense of where we are financially,” Hunt-Coffey said.

However, the first two phases alone won’t provide the enhanced internet connections offered by fiber to residents and businesses, city staff said. So far, the fiber has been brought to the front of people’s homes, but customer support is not yet ready, and more work must be done inside each home to make the residents’ equipment ready for fiber connectivity, Schirmer said.

“We’d still need to build into the house,” Schirmer said.

The coronavirus pandemic directed much of the discussion, with Councilman John Mirisch noting that internet connectivity is “of extreme importance” during the time of social isolation.

“Without it, we couldn’t, for example, be having this meeting,” Mirisch said.

Mirisch also pointed out that completing phase two was the only way to get to the point where residents and businesses would have internet access through the fiber connection.

“But you’ve got to get through phase two before you get to phase three, and I think the goal has to be connecting the whole city, in which case everyone would have internet access,” Mirisch said.

Other than Mirisch, the council members were supportive of the idea that the project’s future be reconsidered next month.

“This really needs to be a separate study session item because there are so many layers to it,” Councilwoman Lili Bosse said.

Councilman Julian Gold added that the first two phases only include 20% of the city, and the topic “needs conversation.”

“It was only the notion that if we complete this piece, it will have benefits for our municipal system, that convinced me to move forward with this,” Gold said. “But I do think that the broader question about ‘what are we going to do’ is really a big question that’s got a lot of dollars attached to it. I think it’s important for us.”