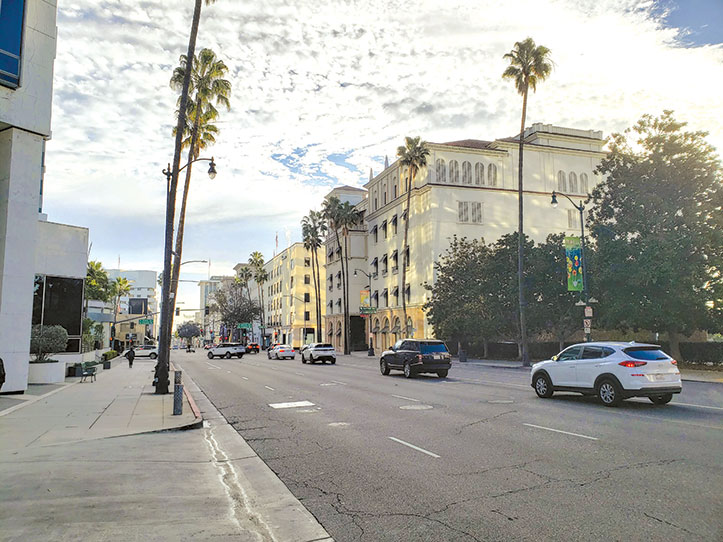 A proposal by Vice Mayor Robert Wunderlich to close some lanes on streets such as Wilshire Boulevard failed to garner enough support among his fellow City Council members. (photo by Cameron Kiszla)

A proposal to close some street lanes to car traffic to create more room for pedestrians and bicyclists failed to garner enough support by the Beverly Hills City Council on April 21 to be implemented.

Vice Mayor Robert Wunderlich proposed that altering some streets – such as South Santa Monica, Robertson, Olympic and Wilshire boulevards, among others – would provide two benefits for the community. Not only would walkers and cyclists have more room to practice social distancing while exercising, he said, but drivers would be more likely to slow down, which might help reduce the rampant speeding reported in Beverly Hills and elsewhere.

The Beverly Hills city staff report said Los Angeles Department of Transportation General Manager Seleta Reynolds reported that L.A. drivers are averaging 12% faster speeds, with some as much as 25% faster, and the California Highway Patrol has also reported a rise in speeders.

Gold argued that by the time the closures were put in place, enough progress might be made in combating the coronavirus pandemic so that the increased car traffic would again need the lanes.

“By the time we figure out where, figure out how, get it accomplished, I would hope we’re in a place to begin removing these restrictions,” Gold said.

Bosse agreed with Gold on the timing issue and argued that, by closing portions of those streets to car traffic, the city might be implicitly encouraging residents and visitors to gather, which could help the disease spread.

Bosse added that the city has other effective methods to dissuade speeders.

“If there are areas of our city where we’re noticing more speed, that’s where we need more enforcement,” she said.

“If we’re not successful in rolling this out properly, I think we’re going to take a big step backward in our ultimate goal, to encourage multi-modal transportation,” Friedman said.

Mirisch said he could be in support of the lane closures, though he was concerned about “the worst outcome: poor implementation and a public backlash.”

“If we can do something in a way that’s going to be cost-effective, that’s fine,” Mirisch said.

Wunderlich pushed back against the criticisms, pointing out that other cities around the country quickly and relatively easily implemented lane shutdowns to accommodate bikes and walkers. The staff report highlighted similar efforts in Oakland, Denver, Minneapolis and Boston. However, the report also noted that pedestrian- and cyclist-friendly Portland declined to close lanes except in parks, and New York City abandoned the lane closures because of the cost of staffing intersections with police officers for safety.

Wunderlich also reiterated his view that this move would be temporary and was only proposed because, like the city’s recent closure of a few blocks of Wilshire Boulevard to accommodate accelerated construction on Metro’s Purple Line Extension, the pandemic-induced slowdown allows for some things that would otherwise be made impossible by everyday life.

“In my mind, this was to take advantage of a one-time event. This was not a pilot project, not something that would morph into the Complete Streets Plan,” Wunderlich said.

COVID-19 infections may be higher than earlier estimates