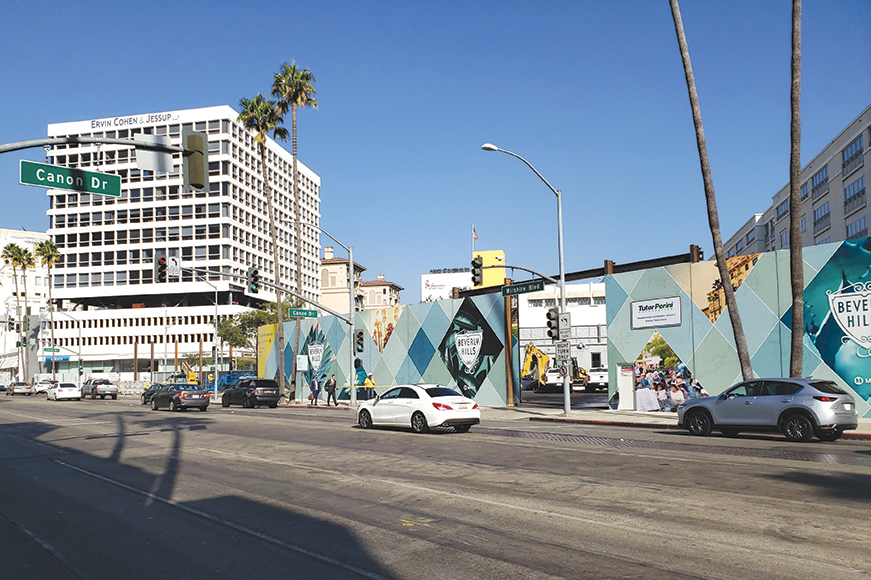 Metro expects Purple Line Extension construction to proceed at a faster pace during the full closure of three blocks of Wilshire Boulevard. (photo by Cameron Kiszla)

Update: As of April 2, the closures are now in effect, per a press release from the city of Beverly Hills.

While the coronavirus pandemic has brought many sectors of the economy to a halt, construction was declared an essential business and has continued, including the work on Metro’s Purple Line Extension in Beverly Hills.

With many other businesses closed or are working by appointment only, the Los Angeles County Metropolitan Transportation Authority said some steps that would have seemed impossible during normal times, such as a full closure of Wilshire Boulevard, will allow more piling, decking and other work to take place.

“The businesses are closed at this time. That will allow work to occur when there’s minimal vehicular and pedestrian traffic in the area,” said Robert Welch, engineering manager for the city of Beverly Hills Public Works Department.

On March 31, the Beverly Hills City Council voted unanimously to authorize the closure of three blocks of Wilshire Boulevard – from Crescent Drive to Beverly Drive – as well as the closure of Beverly Drive at the intersection with Wilshire. The closure can go into effect as early as today, April 2, and detours for drivers will use Burton Way and La Cienega Boulevard, Beverly and Santa Monica boulevards.

Other than some extended working hours – hauling can now take place during morning and evening rush hour – the stipulations of the city’s memorandum of agreement with Metro remain in place.

“I like the concept. This is truly one of those cliched situations about making lemonade out of lemons,” Councilman John Mirisch said.

The construction crews will be able to undo the full closure and return the streets to their partially closed states with five days’ notice.

Depending on how long the closure remains in place, as much as six months could be shaved off the construction schedule, which was expected to be complete in March 2021.

“The six-months saving is based on the assumption that this closure would last about three months,” said Mike McKenna, executive officer of projects engineering for Metro.

However, the assent of the council came at a price for Metro. While the council unanimously thought the coronavirus pandemic provided a great opportunity for expanded construction, several council members noted that in construction, time is money, and for this full closure of Wilshire, Metro would be the primary beneficiary.

The council requested that the cost savings be put toward the financing of the north portal for the Wilshire/Rodeo Station, which is primarily located on the south side of Wilshire Boulevard, forcing subway riders to cross Wilshire to get to popular tourist attractions such as Rodeo Drive.

“You talk about a win-win situation,” Mirisch said. “You save time, you save money and through that, MTA can finance a north portal.”

McKenna said if construction crew members became ill with COVID-19, the construction work would slow down, and even if they did not, “it’s hard to quantify what [the time saved by the full closure] is worth right now.”

“It’s not an immediate savings to the project, but it would position us in a very good spot to avoid cost overruns in the future,” he said.

Despite McKenna’s concerns, the council members said they hoped to see more help from Metro in creating the north portal.

“I certainly hope that this goodwill gesture [of the city approving the closure] will ring true, [and] that the north portal should be financed to a greater extent than originally anticipated by Metro,” Mayor Lester Friedman said.

“Metro is pleased by Beverly Hills City Council’s decision to support its closure request,” Metro spokesman Dave Sotero added. “It will allow us to complete decking for the Wilshire/Rodeo station sooner than expected and will help us minimize future construction impacts to local businesses as they struggle to overcome the impacts of the COVID-19 health crisis.”