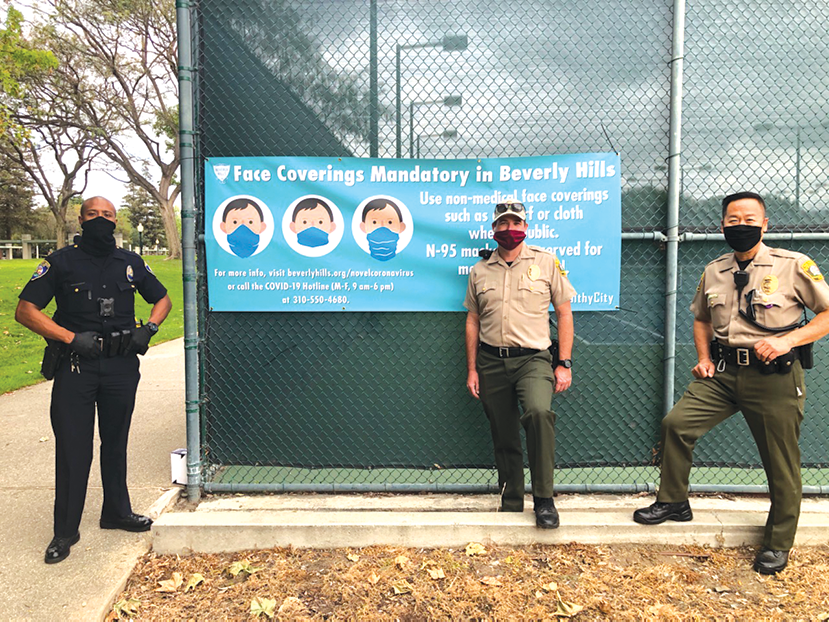 Beverly Hills Park Rangers have been educating the public on the city’s face-covering requirement. (photo courtesy of the city of Beverly Hills)

On April 21, the Beverly Hills City Council focused on the city’s response to the coronavirus pandemic by adjusting some of the rules put in place by emergency ordinances.

The most discussed issue was in regards to the city’s requirement that people wear face coverings in public, an order that went into effect on April 10. The council debated how best to craft the ordinance to create safer behavior from those in Beverly Hills while exempting certain people and situations.

Council members said, in some cases, the ordinance may have gone too far. For instance, Councilman John Mirisch and City Manager George Chavez wore masks on the videoconference because they were at City Hall, and even though they were alone in separate rooms, the ordinance required them to wear masks.

“To me, the concept we’re trying to achieve is to reduce transmission. If you’re sitting in an office by yourself, you’re not going to transmit to anyone else,” Vice Mayor Robert Wunderlich said.

City staff proposed several exemptions to the mask rules, including for children under the age of 2, those with breathing problems and those who are traveling in their car by themselves or only with members of their household, among others.

“At some point in time, the exemptions swallow up the rule … We’ve created a situation where if anyone says ‘I can’t breathe with a mask on,’ they’re exempt,” Mayor Lester Friedman said.

The council unanimously decided to require masks in public only when people encounter others outside of their household and there’s a reasonable likelihood they will come into close proximity.

“Everyone will have a mask around their neck as they’re walking around, and if they see someone, they’ll put it up,” Councilwoman Lili Bosse said.

The council also chose to keep in place some exemptions, such as for children under 2 years old, people undergoing medical and dental procedures, and those asked to remove the face covering by law enforcement, but declined to include the breathing problems exemption, as well as others that were made unnecessary by the change to the ordinance.

The council also discussed how best to enforce the face-covering ordinance. Administrative fines and misdemeanor offenses were considered.

“We shouldn’t institute rules we have no intention of enforcing,” Mirisch said.

The council decided against the misdemeanor offense, as it would give jurisdiction to the county courts, which are currently operating in a limited capacity because of the pandemic. Instead, Beverly Hills will enforce administrative fines of $100 for a first offense, $200 for a second offense and $500 for any subsequent offense.

“I think we need some kind of consequence for being offensive or disrespectful or whatever, but in general, we need to be saying ‘please put the mask on, it’s in your best interest and everyone else’s,’” Councilman Julian Gold said.

The citations can be given out by the city’s Park Rangers and members of the Ambassador Team, who have been performing outreach to members of the public about the face-covering ordinance, said Jenny Rogers, director of community development. Between April 17 and 20, Rogers said the ambassadors and rangers contacted 1,500 people of approximately 6,500 total park visitors about wearing face coverings, and the city now displays large signs about the ordinance.

“This has been an incredibly successful effort and we’re making an impact and getting folks to comply with the order,” Rogers said.

The council also left the door open for future changes to the face-covering ordinance.

“This is evolving. We’re going to be addressing this again in two weeks … My guess is as cities reopen, masks are going to be part of daily life for a little while,” Bosse said.

Aside from face coverings, the council made other changes to the emergency ordinances that were passed last month. The council chose to further limit the types of commercial tenants that can defer paying rent during the crisis, expanding the types of tenants that don’t qualify from Fortune 500 companies to Fortune 1,000 companies; including evictions for landlord occupancy, renovations, condominium conversions and demolitions in the ordinance, joining the Ellis Act evictions that were already included; and preventing penalties and interest from accruing on business taxes during the pandemic, among other changes.

However, the council declined to take action on some other items, such as what to do about situations where tenants move out without paying deferred rent due to their landlord, so that City Attorney Laurence Wiener could research the issue and present the council with options.

“We’re creating potential unintended consequences I’m not sure we’re going to be able to think through tonight,” Wunderlich said.

The council also discussed the financial impact the coronavirus is expected to have on the city.

Director of Finance Jeff Muir said the city took a “fairly pessimistic approach” to looking at how much revenue would be lost and how the city would have to adjust during what’s likely to be a gradual recovery, likely to begin in late June or early July.

“There’s just so much unknown right now, and what we’re forecasting is going to be a continual work in progress as we work through this crisis together and work to find solutions,” Muir said.

Muir said the city expects the fiscal year 2020-21 general fund revenue to be about 20% less than that of 2018-19. In comparison, the Dot-Com Bubble only slowed growth, with revenue rising about 0.4%, and the Great Recession led to a 6.2% decrease in revenue.

If no action is taken, Muir said, the city will have a $104 million budget gap over the next six years. To help remedy this gap, Muir said the city is looking into short-term solutions like delaying capital improvement projects, keeping some unfilled jobs vacant, reducing the city workforce through voluntary retirements and buyouts, and forgoing some vehicle and equipment repairs for a year.

In the long-term, the city may also have to consider buyouts and layoffs, reduced overtime for city staff, reductions to city-sponsored events and more, Muir said.

“We’re living in unprecedented times with a lot of uncertainty still remaining … We are in a fortunate position based on prior fiscal stewardship of the city to commit to the crisis in a strong financial position, and it gives us more ability to be more thoughtful about our positions,” Muir said.

Wunderlich said the council could use some of its reserves to help fund that gap.

Mirisch said the city has to be “very judicious and prudent” when using reserves, because “we don’t know if there’s going to be an earthquake tomorrow, and there could be.”

“Yes, we can and should use our reserves. We also should create policy to ensure that those reserves are as quickly as possible built back up,” Mirisch said.

The council members said decisions about expenditure cuts and reserve use will come later, and Chavez said he’ll have more detailed information for the council once the city holds sessions for this year’s budget. Council members said they were open to this upcoming budget – which must be approved by July 1 – being done on a three- or four-month basis instead of annually, to create more flexibility for the city. The council members also asked that they be updated monthly on the city’s finances.

“We’ll know on a month-to-month basis if we’re moving in the right direction or if we need to go further, but this is a very fluid situation,” Chavez said.

Council members also requested that the public be kept up to date on changes to the city’s finances.

“It’s a work in progress, but sooner rather than later, we should get the details out so people know what we’re thinking about and can help with the decision-making,” Wunderlich said.