Why aren’t you watching ‘Star Trek: Picard?’ Do it now 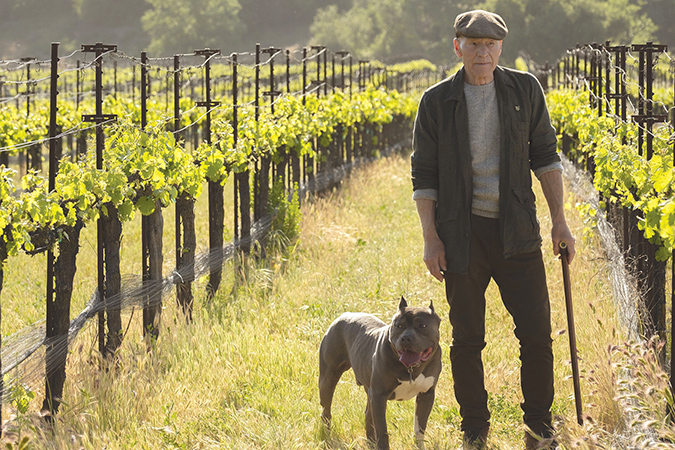 Jean-Luc Picard (Patrick Stewart) is retired and prefers the solitude of his winery, but is thrust back into duty in “Star Trek: Picard.” (photo courtesy of CBS All Access)

This is the first in a series of recommendations of films and series that can be accessed at home during the season of social distancing and shutdown of theaters. Stay safe while you quarantine and chill on home screens.

Sir Patrick Stewart is an international treasure. He enlivened X-Men leader Charles Xavier for seven films, lends his vocal talents to “American Dad” and concocted quite the villain in “Green Room,” a neo-Nazi horror-thriller. But he is first and always Jean-Luc Picard, the once and future captain of the Starship Enterprise of the United Federation of Planets, who boldly went to planets unknown for seven glorious seasons and four films.

Thanks to CBS’s streaming service All Access, the greatest “Star Trek” captain reprises his role yet again. He might portray an older, retired admiral, but Jean-Luc’s eternal optimism – his unbending belief in universal ideals like progress, equality and decency for all, prejudice be damned – serves as an enduring legacy.

In 2009, the Paramount film “Star Trek” seemed to reset much of the timeline by sending a Romulan ship back in time when a star went supernova destroying the alien species’ home planet. Many diehard Trekkies wondered what that meant for the old timeline. Was it erased? Had director J.J. Abrams snapped it out of existence? Only a throwaway line offered a clue: a parallel timeline. With “Picard,” the story picks up after those events.

Set some time after the intergalactic tragedy first referenced in 2009, Picard has long since resigned his commission. He oversaw the relocation of immigrant Romulans in need of new homes. But something went very wrong, and the man who served as a tall pillar of the Federation choses solitude instead of confronting the problem head on.

Now, things have changed for Jean-Luc. Hiding from the galaxy in the confines of his winery, he only resurfaces with a new book on lost history. But nights are a problem since he dreams of his deceased friend Data (Brent Spiner), the android officer of Enterprise killed during the events of “Star Trek: Nemesis,” that wretched film featuring a young Tom Hardy as a clone of Picard. Then he’s visited by a woman, Soji (Isa Briones), with a unique connection to Data. Ending life away from life, Picard shirks the Federation’s wishes that he quietly die.

Unwilling to take advantage of his former crew, who would do anything for him, he seeks out a younger, far-less-refined batch, including Captain Rios (Santiago Cabrera), tarnished former officer Raffi (Michelle Hurd), walking robotics encyclopedia Dr. Agnes Jurati (Alison Pill) and Romulan refugee Elnor (Evan Evagora), raised by women warriors in an ancient tradition. 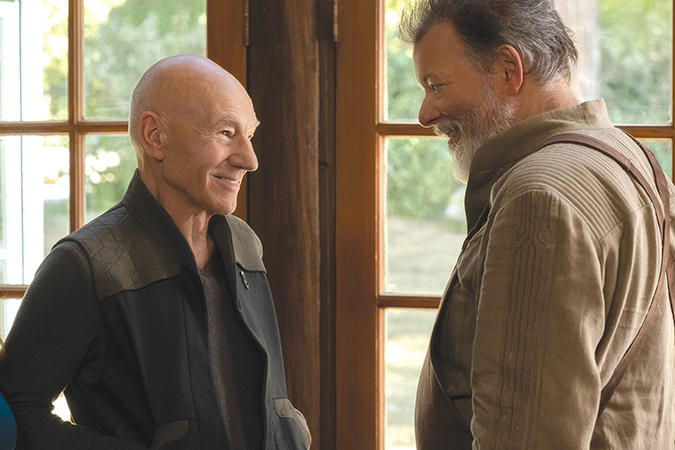 This is all mostly new territory, but a few familiar faces suture old-timers into this entirely updated and visually quite polished experience, including Spiner’s Data, former Counselor Deanna Troy (Marina Sirtis) and Will Riker (Jonathan Frakes), who formally went by “Number One.” Frakes also directed two of the season’s episodes. Such cameos are fun, but others arrive with more pressing relevance to the story, particularly Seven of Nine (Jeri Ryan), the liberated Borg from “Voyager.”

On All Access, “Star Trek” has taken on new life, the kind unavailable during primetime on CBS. Violence and strong language are easy examples of what is a much grittier exploration of Gene Roddenberry’s golden goose, but that all makes Jean-Luc’s goodness shine even brighter. Without him, the Federation caves to fear, but his principles remain intact. The galaxy changed, but he is still the Kantian idealist projecting his moral imperative into unfriendly solar systems.

Jean-Luc stands for the marginalized – Romulans and even A.I., in this case. The general public might ignore the rights of the few to appease the anxieties of the many, but not Picard. That’s why Picard endures as a character. He serves as a reminder that some things must bend for the sake of peace and progress – as he often did with the help of his team in that good ol’ Ready Room – while others are deal breakers, especially when they hide behind spin like the common good.

Rather than an alien of the week approach to each episode, “Picard” focuses on a singular story. Each performance and new character entirely works with only minimal pauses in the story’s overarching pulse. And like “Discovery,” this is much more adult fare with an incredible budget that feels more appropriate for the big screen than the living room.

Season one includes 10 episodes, the ninth premiering today. Sign up for $6 a month or binge quickly with a one-week free trial. That said, having access to every “Star Trek” series from Kirk’s five-year mission to “Discovery,” might be worth shelling out half the price of Netflix. “Picard” already received a green light for another season, and Stewart actually appeared on “The View” to formally invite Whoopi Goldberg to also reprise her role from “Next Generation.” Frankly, they could spend seven hours debating wine pairings and still have another hit.