WeHo resident does good during pandemic 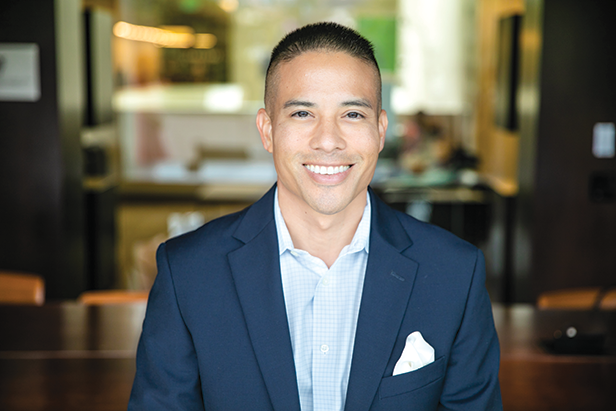 West Hollywood resident Tai Sunnanon has spent much of his life helping others with acts of service. As founder and CEO of the Strategic Insights Group, he works with businesses and nonprofits who seek to do social good. He is also a lieutenant in the Air Force, has taught classes at Harvard University, Vanderbilt University and several other schools, and served in Palau in the Peace Corps.

Recently, Sunnanon was honored for his work with the Peace Corps and his ensuing career by the National Peace Corps Association, which named him to its 40 Under 40 list.

Sunnanon, a former Beverly Hills resident who still resides near the border between West Holly­wood and Beverly Hills, said he learned important lessons from his time in Palau, which is a matriarchal society that taught him to be a better listener, to see different perspectives and to look for ways to help.

“It changed my worldview on how to lead, how to manage people. There’s this certain essence of women leaders that I walked away with,” Sunnanon said.

Sunnanon added that he’s honored to be included on the list, which also honored numerous business founders, nonprofit leaders and politicians, such as U.S. Rep. Joe Kennedy III (D-Massachu­setts), who served in the Peace Corps in the Dominican Republic. While it’s validating and affirming to be included, Sunnanon said, it also “reminds me of the work that is still left to be done.”

“It’s just really cool to be in the mix of brilliant minds doing brilliant work, and there’s so much left to do,” he said.

With the ongoing coronavirus pandemic, Sunnanon has put his efforts into helping those who need advice and life coaching. He recently launched a new online venture, thelifecoach.expert, where he offers those services, and due to the COVID-19 pandemic, Sunnanon is offering a free 25-minute session for up to 25 first-time participants, and all other regular sessions are 50% off through June 1.

Sunnanon said he rolled out his website now because of all the uncertainty surrounding the coronavirus pandemic and its effect on public health, the economy and other parts of life.

“If we look at the lowest level of Maslow’s hierarchy of needs, people need a sense of safety and certainty, and it’s hard to get that in this time,” he said.

Those who’ve worked with Sunnanon said he is a great person to turn to in times like these.

Nancy Gutierrez, who taught a course at Harvard with Sunnanon, said in an email his social entrepreneurship makes the world a better place, and his work as a life coach has “been an inspiration for me as well, especially helping people during times of crisis,” she said.

Gutierrez said Sunnanon also helped her as she took on the role of CEO of the NYC Leadership Academy a year ago.

“I, we are better for it,” she said. “He pushed [my] thinking in ways that help me [gain perspective] and be more strategic about my day-to-day moves.”

Joseph Monbleau, CEO of Train 1 Feed 1, a nonprofit that offers personal training and uses the proceeds to provide food and supplies for people experiencing homelessness, said Sunnanon was instrumental in helping Monbleau turn his passion into his main job two years ago.

“Tai truly is in it for you, and that speaks volumes in how he treats you. He’s right to the point and doesn’t avoid anything you don’t want to hear. He doesn’t have time for that. He’s direct … you have to be open to that, but he’s good at saying those things in a subtle way, which is good and makes you think,” Monbleau said.

Sunnanon’s life coaching will be tailored to individuals based on their current situation and what they’d like their future to be, but he had general advice for anyone who is struggling during the coronavirus pandemic.

The two most important things people can work on are their mindsets and routines, he said. Everyone should try to focus on what is in their control and work to maintain a positive mood, Sunanon said, and developing and sticking to a routine will aid mental health as well.

“I encourage people with families to jointly create routines together. Everyone needs to have input when there’s so much going on,” he said.

Sunnanon also encouraged everyone in the community to give back however they can. If someone doesn’t know how best they can help, they may be “pleasantly surprised” by how effective they can be at new activities, such as picking up and delivering food for the elderly and those without smartphones or computers, who cannot access many popular food delivery services.

“We can rise to the occasion and really feel good about yourself in the process. People need routines, they need to focus on what’s in their control. If you’re not working, what better way to keep your mind busy than volunteering in the community?” he said.

Sunnanon said working with others, especially seniors, can provide different perspectives that can help put minds at ease. For instance, Sunnanon said several of his neighbors are veterans of wars, and how they view the pandemic is affected by those experiences.

“What I’m finding is that they have a beautiful perspective on all this,” he said. “One is the historical perspective. Humanity has seen far worse. And the global perspective is, we’re all together in this.”

These are the kind of people we need during times of crisis. People with a strong head on their shoulders who see the bigger picture. My routines have had to change, so I’m learning to adapt and this piece is a good reminder of how much is actually in my control.

Thank you for your service in both the Peace Corps and US Air Force, Lieutenant!

What a terrific article on such a great person. Tai has been an active leader in the community and this is no surprise that he’s helping, yet again, during our time of need.