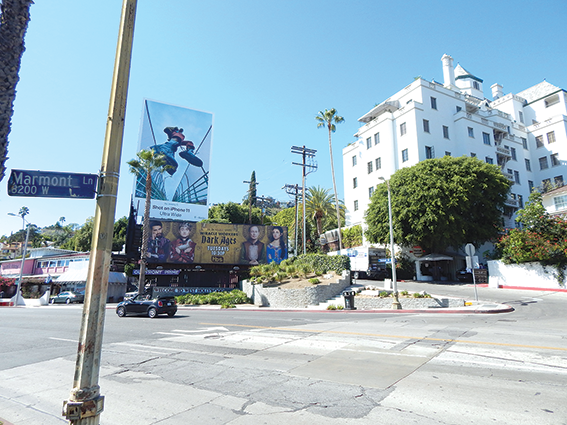 The city of West Hollywood is proposing one of three gateways on Sunset Boulevard and Marmont Lane. (photo by Cameron Kiszla)

The Sunset Strip has been known during its history as a place for entertainment, a playground for the Hollywood elite and a haven for outliers and outsiders.

The iconic 1.6-mile stretch of road offers a broad range of restaurants, boutiques and vibrant clubs, yet some visitors and even residents from neighboring areas don’t know when they’ve entered the iconic strip.

The city of West Hollywood wants to change that by creating visual markers along entry points at Sunset Boulevard and Doheny Road, Sunset Boulevard and Marmont Lane, and Sunset and La Cienega boulevards. City Council members voted unanimously on the Gateway Concepts Framework and authorized phase one of the project on March 2.

“I know that we’ve had many, many presentations and conversations about the gateway signage,” said Genevieve Morrill, president and CEO of the West Hollywood Chamber of Commerce. “It’s something that we are excited for the Sunset Strip to start developing a real identity. We want to make sure it moves with the evolution of the strip.”

The city plans to release a request for qualifications in April 2020. Between May and June, applicants will be reviewed by a committee, which will then select three candidates to create gateway concepts using the approved framework for their respective location.

Garen Yolles, an associate planner for the city’s Planning and Development Services Department, said these gateways should be something more than just a standalone sign. They should have the potential to be a destination on the strip, Yolles said.

According to a staff report, gateways will strengthen the Sunset Strip’s identity and create a sense of arrival and place, invite more people to walk between destinations and create places that invite people to spend more time outside.

Council members were enthusiastic about the project but had some concerns regarding designs and maintaining the history of the Sunset Strip.

Councilman John Heilman thought a conceptual design considered for La Cienega’s gateway wasn’t going to work because of the volume of traffic and plaza area, which the framework suggests it incorporates.

“When we create these mini plaza areas that are supposed to be a great public amenity, but that we do it at a location where no one really wants to sit, it becomes a gathering place for problems,” Heilman said.

Although he is in favor of public spaces and expanding them, he thought that a different design would be better or perhaps candidates should focus on the other two gateways instead.

Councilman John Duran added that the history of the strip is something to recognize, from the notorious identity of a time when mobsters such as Mickey Cohen and Bugsy Siegel operated on Sunset to its rich musical history.

“I understand the need for Sunset to continue to evolve and to become whatever it is going to become, but at least I want to try to capture the notion that music and the production of music,” Duran said. “So many things have happened around music and nightclubs.”

However, Mayor John D’Amico thought there are better ways to celebrate the cultural life of West Hollywood than to devote aspects of the gateways to history.

“I think that looking at nostalgia as a way to define the future of the city is, in some ways, counterproductive to my ideas of how it should be,” he said.

Ultimately, the hope is to find balance for gateways and provide new destinations for the famous Sunset Strip.

“Hopefully, when coming back with signage, there’s a way to capture some of these ideas and concepts that makes Sunset so unique for a hundred years,” Duran said.

Thank you for this article. I hadn’t heard this news from any other outlet.