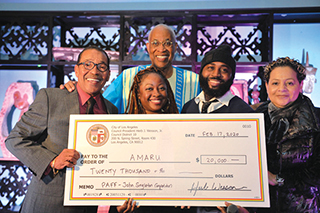 Three winners were announced for the John Singleton Short Film Competition and awarded $20,000 each for their production and completion of a live-action narrative short film.

Jennifer J. Scott and Brandon Hammond, filmmakers of Amaru, Chelsea Hicks and Mitchell Branden Rogers, filmmakers of Contraban and Kemiyondo Coutinho and York Walker, filmmakers of The Séance were named winners during a private reception at the Pan African Film Festival.

The 28th annual PAFF screened a record-breaking 225 films, representing 52 countries and in 26 languages between Feb. 11-23.

In conjunction with PAFF and the Los Angeles embRACE L.A. initiative, the film competition pays tribute to film director John Singleton who is known for “Boyz N the Hood,” “Poetic Justice” and “Baby Boy.”

Singleton became the first African American and youngest person to be nominated for best director in 1992.

Under the leadership of Herb Wesson, L.A. City Council president emeritus, and Councilman Mitch O’Farrell, 13th District, the embRACE initiative aims at unifying Angelenos and empowering communities through a citywide conversation about race and racism and challenging and changing inequities.

Together these two organizations continue to work on showcasing Black filmmakers and their stories.