‘The Invisible Man’ must be seen and feared 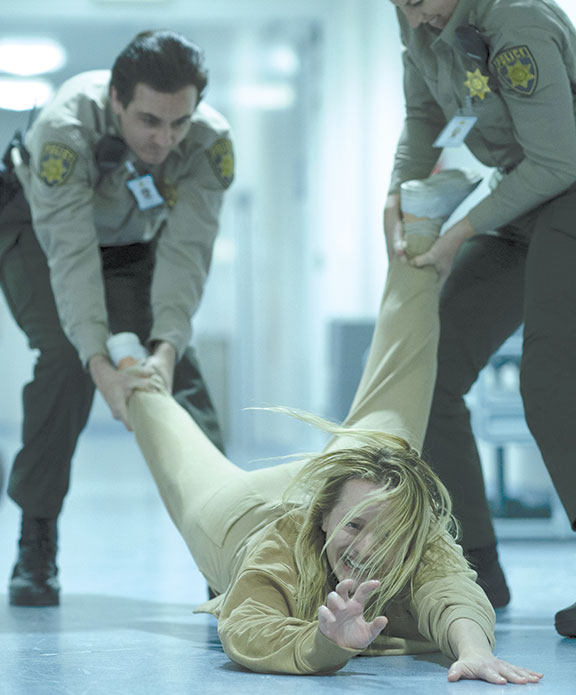 As an analogy, “The Invisible Man” paints a grim picture of domestic abuse. Imagine a scenario in which a woman escapes atrocities done to her unseen by others and her abuser continues to harass and attack her, again, unseen by others. But no one believes her, and the louder she screams for help, the more hysterical she sounds.

Suddenly, a horror film about an invisible foe sounds less like science fiction and more like a story based on real life. “Invisible” is the kind of horror flick that amplifies the cultural neurosis of the present moment, and quite effectively so.

This isn’t the first time Elisabeth Moss embarks on heavier material. While Hulu’s “The Handmaid’s Tale” explores social oppression of women, “Invisible” highlights the challenges of oppression amidst skeptical spectators. In the opening scene, Cecilia (Moss) executes a plan to flee the prison parading as a home run by Adrian (Oliver Jackson-Cohen from “The Haunting of Hill House”), a wealthy tech innovator. Amidst her recovery in the safe walls of the Lanier house, both James (Aldis Hodge) and daughter Sydney (Storm Reid from “A Wrinkle in Time”) help Cecilia reacclimate.

Only two weeks later, unexpected news hits: the ex committed suicide. Alas, this headline accompanies a series of odd occurrences. Items go missing, emails sent by someone else, etc. As if the confines of her former partner’s house have somehow expanded, Cecilia is once more secluded, and only she can unravel the mystery surrounding her ex’s alleged return. 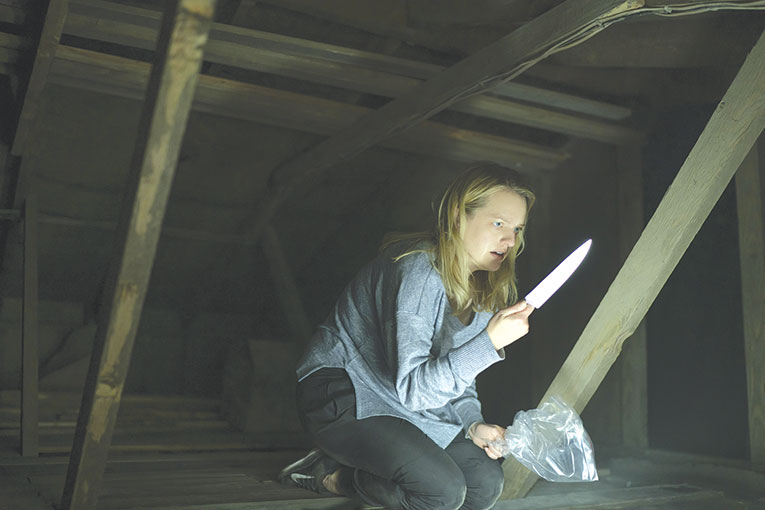 ­Elisabeth Moss faces a foe who can’t be seen in “The Invisible Man,” a film that touches on issues of domestic violence. (photo courtesy of Universal Pictures)

For any fans of the H.G. Wells’ novel of the same name, this “Invisible” is a skeleton of the source material. Besides Adrian’s last name, Griffin, the only element of consequence is invisibility and how it can create a monster out of its user. Luckily, for all the Wellsians out there, this particular work enjoys 87 years of adaptations, so a fresh take is hardly grounds for dismissal.

Symbolically, the Invisible Man is a splendid archetype that represents so much that occurs out of sight and easily out of mind for the general public. Seeing is believing, after all. And without proof, so the rationalist says, the only choice is to keep searching for answers, further down a rabbit hole that might put others or yourself in danger. That’s the fear at work in “Invisible.” What if no one witnesses your plight?

Women who survive abuse already know the answer to this, and for that reason alone, “Invisible” might be a triggering experience, so view with caution. Perhaps the most surprising element of the film is how much realism infuses its approach to horror. Writer-director Leigh Whannell knows his way around gore, earning his early credentials writing the first three “Saw” films.

Whannell even dabbled in jumps and jolts, writing the “Insidious” films too. Certainly “Invisible” features suspenseful sequences, but the real horror resides in the drama. When all Cecilia’s friends question her sanity or abandon her, the evidence supports such responses. Violence or jump scares are horror’s primary currency, but placing such heavy focus on Cecilia’s isolation transforms this monster movie into something akin to emotionally intense dramas.

That said, “Invisible” works on more than just a conceptual level. It’s an expertly crafted film, from performances to execution. Don’t trust the trailers that give away too much and underplay the high caliber filmmaking at work. Thank Whannell for setting the stage, but Moss is far from unnoticeable.

The “Mad Men” star provides one of her best performances on the big and small screen. Unlike the numb characters she masterfully plays in various TV series, she gets to show off her range a bit more. Sure, 2019’s “Us” offers a glimpse of what that can look like, but this heroine isn’t the average final girl in this above-average film.

Many a horror films fall apart come the final showdown. Slashers especially love throwing audiences the middle finger with a final reveal that the villain who was just decapitated, burned alive, shot 453 times or sent back to hell is, in fact, still alive. “The Invisible Man” has more respect for the public’s intelligence.

Without giving much away, the conclusion works in one of two ways. The more banal interpretation literally interprets what occurs, summing things up as a kind of catharsis. Sure, why not. But a more complex reading examines Cecilia’s relationship with men throughout the entire film. A Hitchcockian twist shirks expectations and poses a final thematic quandary, one best experienced for yourself if you choose to embark upon the year’s first great horror film.

Masters of Taste returns to the Rose Bowl