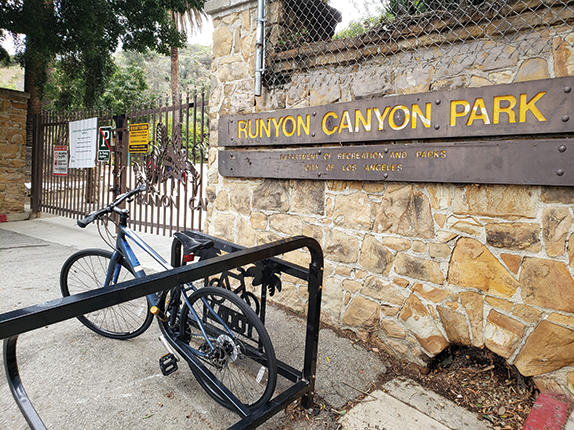 Runyon Canyon’s views of Los Angeles are inaccessible to Angelenos, as the park is now closed. (photo by Cameron Kiszla)

All across the country, people are staying indoors as much as possible to help prevent the spread of the coronavirus pandemic.

Those looking to stretch their legs in the Los Angeles area, however, are being left with fewer options after a weekend of packed trailheads, busy parks and filled beaches led to their closure, as announced by Los Angeles County on Twitter. All hiking trails closed on March 23, and the same day, closures were enforced at all parks under the authority of the Mountains Recreation and Conservation Authority, which oversees trails, open space, parks and wildlife preserves including locations along the Los Angeles River, overlooks along Mulholland Drive and Franklin Canyon Park in Beverly Hills.

Dash Stolarz, director of public affairs for the MRCA, said while going outside and walking is a great idea for exercise, everyone was doing it at the same time.

“People started coming in hordes to the parks,” she said. “There was not any way that they could maintain a 6-foot distance from each other for safe social distancing, so there was no way we could guarantee that public health was being maintained. We’re not capable of being on the trails to make sure people are staying 6 feet apart. We really had no choice.”

Instead, Stolarz suggested members of the public take walks on their streets and in their neighborhoods, as going outside is a great way to deal with the stress of a pandemic. What’s important, she added, is for people to stay 6 feet apart from each other, because if the coronavirus spreads, “there are going to be dire consequences.”

“To close parks is completely against anything we’d ever want to do, but what supersedes what we want to do is public health, so we had no choice,” she said.

In the city of Los Angeles, public recreation space was similarly crowded, with media reports showing pick-up basketball games and packed beaches despite the push for social distancing from local leaders. Los Angeles Mayor Eric Garcetti announced that as of March 23, golf courses in the city, organized group sports at city parks and the parking lots at Venice Beach would be closed.

“I hope we can assess how we can make sure people aren’t congregating at our beaches and, if necessary, close them altogether. It doesn’t mean that it’s time to find another place to get together. This is serious; 6 feet matters … your decision to not physically distance yourself may kill someone,” Garcetti said in his March 22 coronavirus update.

In Los Angeles, playgrounds and recreation centers have been closed as well, though outdoor spaces are still available for people to use, said Rose Watson, a spokeswoman for the Los Angeles Department of Recreation and Parks. In addition, restrooms with doors open to the outdoors are available for park visitors to use, and maintenance has been “scheduling cleaning at the parks around the clock,” Watson said.

“The whole goal is that even though the order is safer at home, we still want to encourage people to enjoy the outdoors. You have to go walking, go to the park, enjoy the fresh air. We just want to ensure people are practicing safe distancing,” she said.

Some in Los Angeles want to do even more. On March 24, in a letter to Michael Shull, general manager of the Los Angeles Department of Recreation & Parks, Los Angeles City Councilman David Ryu, 4th District, proposed that Runyon Canyon Park and Lake Hollywood Park be closed on weekends to prevent large crowds from gathering as they did this past weekend.

“I have been a longstanding champion for parks and open space, and have prioritized park access as chair of the City Council Committee on Parks. However, after discussing the matter with public health experts, I believe this is a necessary step,” Ryu said.

Ryu said on weekdays, the levels “have been reasonable and social distancing has been observed,” though if that changes, “the department should review full closure.” On March 25, Ryu tweeted that Runyon Canyon has been closed until further notice “in order to adhere to social-distancing recommendations.”

In West Hollywood and Beverly Hills, local officials are operating similarly to Los Angeles in that indoor amenities are closed, but outdoor space, especially green space, is open for the public to use, while sports equipment such as tennis courts is off-limits.

“We’re using the parks right now as passive areas, to go for a walk or a jog, but not to congregate in one space,” said Stephanie Martinez, recreation manager for West Hollywood.

Martinez said the city doesn’t want to see its outdoor amenities packed, as that would allow the disease to spread more easily, and sports like tennis and basketball are off-limits because they are likely to help spread coronavirus among the participants, who can’t wash their hands afterward at the now-closed park bathrooms.

“With tennis and basketball, it’s the transfer of the balls and the equipment. That is what we’re trying to avoid at this point,” she said.

Martinez added that the city is trying to pivot to offering what it can online. For instance, Jewish Family Service of Los Angeles, which operates its West Hollywood Comprehensive Service Center at Plummer Park, is available by email and phone, and the organization “will be back for remote consultations” once they are cleared to do so, Martinez said.

“The recreation division is looking at some alternative choices we can offer to our residents, things we can take care of virtually,” Martinez said. “In the next week or so, we’ll be releasing some info to provide to the community and support them in this time of recreational activities they can do at home.”

Jenny Rogers, director of community services for Beverly Hills, said they are also looking to offer what they can online, whether that’s resources from the Beverly Hills Public Library or events like Music in the Mansion, which could be offered as a livestream on Facebook or Zoom.

“Everybody’s now trying to figure out how to bring those services online in a digital format,” she said.

Much like in West Hollywood and Los Angeles, Beverly Hills has closed many of its athletic facilities and public indoor spaces, including basketball courts, playgrounds, mini parks and community centers and tennis courts at La Cienega and Roxbury parks. Open green space is still available for people to use, Rogers said, though the city wants park visitors to practice social distancing. Park rangers and recreation staff have handouts advising about social distancing, she added, and they will disperse them to people who are congregating in parks.

“If it becomes necessary to close those things, we will, but that’s not the intent right now,” she said.

The city is taking things “day-by-day,” Rogers said, and is listening to updates issued by local and national health authorities.