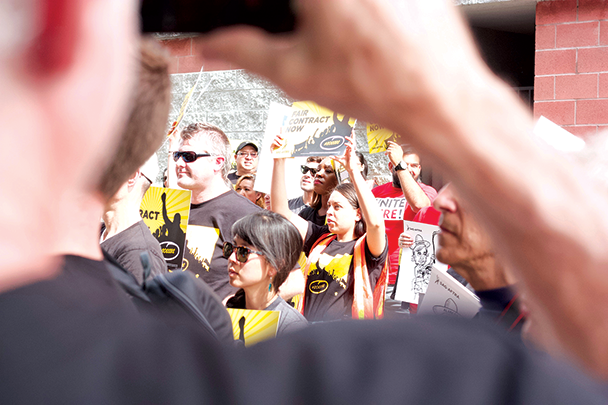 “We are here in front of Spanish Broadcasting System stations Mega and La Raza fighting with our courageous members who voted to join SAG-AFTRA more than three and a half years ago – and they still don’t have a fair first contract,” said Gabrielle Carteris, president of SAG-AFTRA.

SBS is one of the largest Hispanic-owned media companies in the United States. Three years ago, Los Angeles SBS employees voted to join SAG-AFTRA, and since then, SBS and its union employees have been negotiating a contract.

According to SAG-AFTRA, SBS continues to propose a 15% wage cut. In 2017, on-air and off-air employees were wrongfully terminated — and later reinstated after an order by the National Labor Relations Board.

Durazo said she doesn’t think these union workers are asking for anything special and finds it appalling SBS hasn’t come to an agreement with its employees. SAG-AFTRA has contracts with 19 other radio stations in L.A. and television stations Telemundo and Univision, she said.

“Three and a half years ago, these workers won a democratic election fair and square according to the laws of the land,” Durazo said. “An overwhelming majority stood together and demanded fair wages, not minimum wages, but fair wages.”

Castillo has been part of the radio industry for 15 years. He’s seen robust growth since the 1970s due to advertising revenue.

“There’s a myth that this industry is barely up and coming in the future,” Castillo said. “That there’s not a lot of money right now, which is why we have to make sacrifices, but that is not true.”