Update at 10:56 a.m. on March 20: Pink’s Hot Dogs announced on Twitter that the restaurant is closed for the first time in 80 years due to Los Angeles’ “Safer at Home” order. 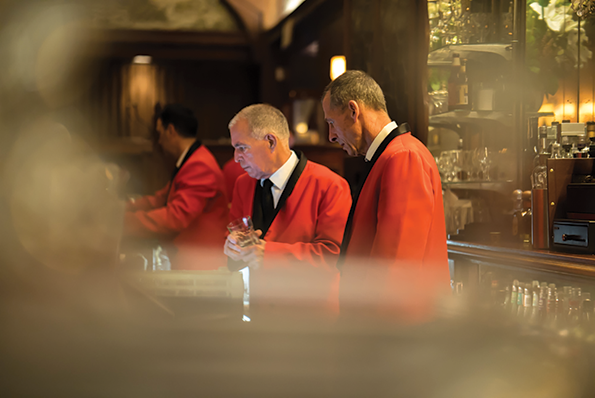 The coronavirus pandemic has forced drastic reactions in many sectors of society, but the restaurant industry has been hit as hard, if not harder, than any other.

For almost all eateries, the business model has shifted from bringing customers in to bringing the restaurant to the customers. After emergency declarations and ordinances were approved by the City Councils for Los Angeles, West Hollywood and Beverly Hills, restaurants may not offer dine-in meals. Instead customers must take their food to go or have their dishes delivered.

For some restaurants, that hasn’t caused too much of a change. For instance, Richard Pink, of Pink’s Hot Dogs on La Brea Avenue, said so far, his business has not been overly impacted by the dine-in prohibition.

“Surprisingly, during the day, it’s been about normal … Everything is to-go, but people are still lining up and they’re either bringing it home, back to their business or eating it in their cars. Nighttime business is slower, I think because of the weather and I think people are hunkering down a little bit at night,” he said.

To compensate, Pink said he will reduce the store’s nightly hours from 2 a.m. on weekdays and 3 a.m. on weekends to 10 p.m. each night. Even with the reduced hours, Pink said, as of now, all 32 employees will be able to keep their jobs.

“Many of our employees have been with us for over 10 years, and we’re aware they have families they’re supporting,” he said.

At Canter’s Deli on Fairfax Avenue, however, not all of the employees have been so fortunate. While the restaurant has been able to serve takeout orders and the bakery has continued to serve customers, there hasn’t been any work for the waitresses, busboys and dishwashers, Marc Canter said. That could be close to 100 people needing work, and Canter said he’s encouraged those employees to find temporary work elsewhere.

“If our restaurant is closed, we can’t bring them back. We have nowhere to put them. But we’ve made the suggestion that those who have newer cars, maybe they should drive for Uber. No matter what kind of car they have, they can get a job with Postmates or DoorDash. That’s what’s thriving, people doing more online ordering,” Canter said.

Customers, especially regulars, are coming in to place their to-go orders and pick up baked goods, which grocery stores have trouble keeping on their shelves, Canter said. Customers can also have their food brought out to their car in the parking lot, and delivery services will allow customers to purchase food from Canter’s as well. The loss of dine-in business, however, is still “a big blow,” Canter added.

“We are a big establishment, and we have bills coming in from last week that need to be paid next week. The cash flow stopped, 80% of it stopped. For us, it’s about paying the bills from last week. People still have paychecks they’ve got to cash. When you’re running a business that big, it takes a lot of cash flow. It’s a very scary time for everybody,” he said.

However, even operating on a limited basis doesn’t work for every restaurant. At Musso & Frank Grill on Hollywood Boulevard, the take-out and delivery options aren’t enough to keep the famed restaurant going, said Mark Echeverria, the restaurant’s COO, CFO and proprietor.

“Our food, by the nature of our menu, isn’t food that travels. We’ve always kind of stayed away from that. I also feel like if we were to try to do something like that, it’s hard to make money, to even break even on that kind of stuff,” Echeverria said.

Echeverria said he is also worried for the safety of his 82 employees, so he closed the restaurant entirely until March 31, though the workers will still receive their regular pay, as well as their employer-sponsored health insurance.

“It comes down to family,” Echeverria said. “Everyone that we work with is our family. In times like this, we take care of our family. It’s an incredibly stressful time, and you deeply compound that stress when people worry about how they’re going to get that next meal or pay that rent.”

Echeverria said it’s fortunate that Musso & Frank is in the position to be able to pay their employees with the restaurant closed, though he added that when the pandemic is over, Musso & Frank – as well as dine-in restaurants everywhere – will desperately need customers to return quickly, as the closures are “really going to affect us.”

“When this is all said and done, come out and support dine-in restaurants. We’re really, to this point, taking the biggest hit of this, and that’s nationwide … Support all of us, because we need the help,” he said.