Palmer Building to be renovated for hotel 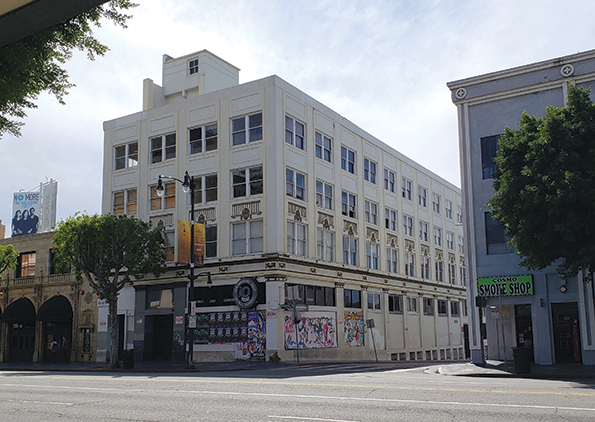 The Palmer Building was the site of a police raid in 2018 after reports of drug and gun sales. (photo by Cameron Kiszla)

The Palmer Building at Hollywood Boulevard and Cosmo Street has seen a great deal of history in its more than 90 years.

According to a history of the building by journalist Richard Bence published on the Hollywood Business Improvement District’s website, the Palmer Building was developed by Dr. E.O. Palmer, a founder of the Hollywood Chamber of Commerce. Over the years, it hosted the Los Angeles bureau of the Associated Press and was home to iO West, the Los Angeles site of the famed Chicago improvisational comedy group and school ImprovOlympic.

In February 2018, however, iO West closed. Seven months later, the Los Angeles Police Department conducted a raid on the building, which was supposed to be vacant but was suspected to be the site of drug use and drug and weapons sales, and found dozens of people living there, according to the LAPD.

After an announcement earlier this month, the future looks brighter for the historic four-story building. Artist Guild Hotels stated that the Palmer Building, located at 6362 Hollywood Blvd., will undergo renovation and seismic retrofitting so it can be home to an 87-room hotel called the Palmer.

Representatives for Artist Guild Hotels were not available for interviews, but in a press release, Daniel Hyde, president of Artist Guild Hotels, said the development company is “honored to contribute to the rehabilitation of the Palmer Building and the continued revitalization of Hollywood Boulevard.”

“The Palmer Building has gone through some very rough times over the past few years, and we’re excited to have the opportunity to revitalize the building, bring back its historic charm and create a unique experience for hotels guests and pedestrians along Hollywood [Boulevard],” Hyde added.

The developer plans to add up to seven partial stories on top of the Palmer building in a tiered system that will “minimize its appearance from Hollywood [Boulevard]” and “maximize pedestrian interaction,” according to the release. The tiered system will also allow for a rooftop pool, restaurants and bars that will be open to the public, and multiple areas for guests and visitors to enjoy views of Hollywood and the Hollywood sign.

In addition, the rehabilitation will include the building’s historic architectural details, including the storefront on the ground floor and the blade sign on the Hollywood Boulevard façade.

“We’ve worked very closely with our preservation team to identify, retain and preserve the building’s character-defining features and to design an addition that is compatible with but distinct from the existing building,” said Hilda Rodriguez, the project’s architect, in the statement.

Kristopher Larson, president and CEO of the Hollywood Property Owners Alliance, which oversees the Hollywood Business Improve­ment District, said the HPOA is excited to see the historic legacy of the Palmer Building brought back to the forefront, as it is “currently a bit of a stigmatized building on Hollywood Boulevard.”

“Obviously, the reinvestment also means hopefully the elimination of the challenges the building has created in the public safety aspects of the community. Then of course, it adds additional hotel rooms to our visitation economy, which is so critical to the community,” Larson said.

“Anytime you have a blighted building, the impression that it lends to its neighboring buildings is significant,” Larson said. “The replacement of that blight with something that is going to be reinvigorated and restored is huge.”