‘Onward’ is fun but bypasses memorable 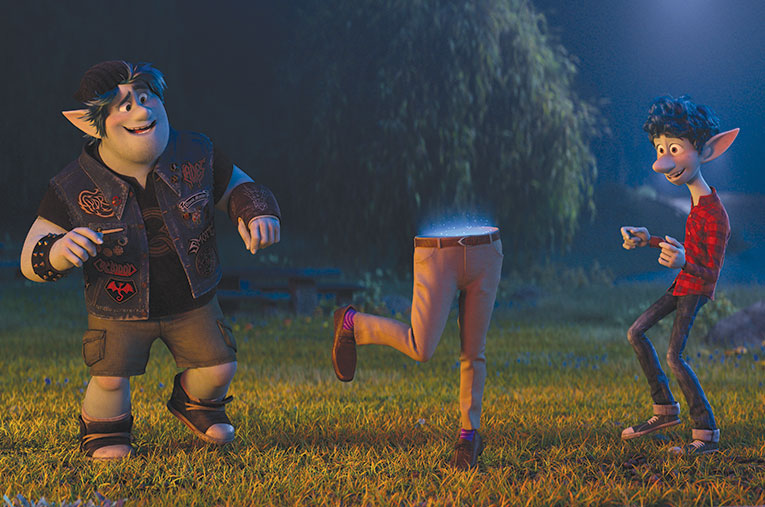 Brothers Ian (Tom Holland) and Barley (Chris Pratt) use a magic staff and spell to resurrect their father in “Onward,” but only succeed in bringing back his lower half. (photo courtesy of Pixar)

Nobody’s perfect. Pixar proved that some time ago by going all in with not one but three “Cars” films. That’s the studio’s low. As for “Onward,” a clever take on modern-day fantasy, the 22nd film from the Disney subsidiary falls directly in the middle of the lot, never cashing in its brilliance or going creatively bankrupt.

If you remember Netflix’s “Bright,” a cop drama with a fantasy twist, then a truly mediocre flick might tarnish any good grace that should belong to “Onward.” As an opening narration by co-protagonist Ian Lightfoot (Tom Holland) says, magic once dripped from every corner of the world, but the allure of modern conveniences marked the end of the old ways.

Centaurs prefer horse power from a car’s engine, not their own legs. Pixies wreak havoc as a motorcycle gang, forgetting they can fly. And elves are more likely to become accountants than mages. In the case of Ian and brother Barley’s (Chris Pratt) dad, both are true. And on Ian’s 16th birthday, their mother, Laurel (Julia Louis-Dreyfus), presents an unexpected gift from their deceased father: a magic staff and a spell that can bring him back to life for one day.

Barley has prepared his whole life for this moment. He protests the destruction of ancient ruins, plays board games rooted in real magic history and rocks a unicorn-themed van with the license place, “GWNIVER.” One problem: he doesn’t have the magic. But insecure, immature Ian does. Second problem: thanks to Ian’s uncertainty, the spell only reanimates dear dad’s lower half.

But hope is not lost. Barley puts his magic fandom to good use as the brothers embark on a quest for a special stone needed to complete the spell. They only have 24 hours to overcome obstacles on their journey and growing familial tiffs. 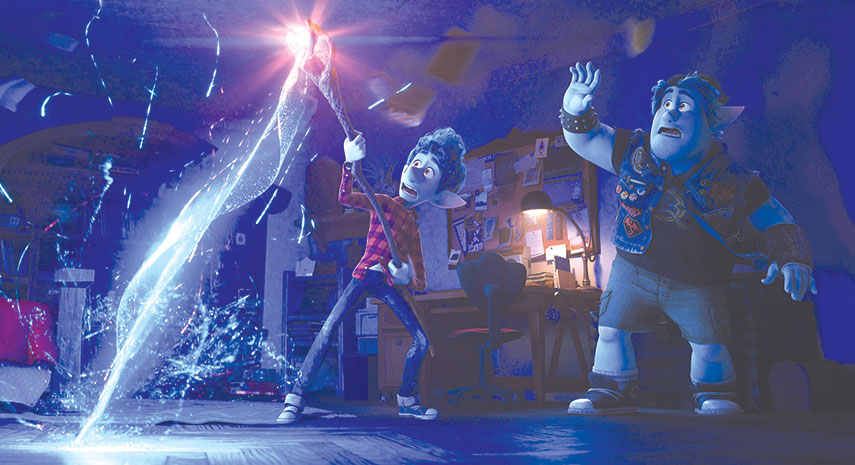 For anyone familiar with the writings of Joseph Campbell – the mythologist who inspired George Lucas’ historic foray into what’s best described as science-fiction fantasy – the heroic journey is a familiar convention. Heroes must take the path less traveled, overcoming impossible odds, avoiding boobytraps and maybe fighting a dragon along the way. Theoretically, that’s all here, but it comes too late.

For a story so interested in bringing magic to the modern age – which should be rather easy in a film straight out of a J.R.R. Tolkien dictionary – those contemporary surroundings dominate the film, leaving only the third act to fully embrace the film title’s promise. Sure, a pet dragon moving like a dog, wild unicorns eating out of the trash and an easily winded centaur make for a quick smirk, but Pixar is normally better than this.

“Onward” should work better than it does. Instead, the jokes don’t entirely land, and the film replaces clever moments with action (a car chase here, a building on fire there). That’s standard operating procedure for a mid-level DreamWorks film (“How To Train Your Dragon” excluded, of course), but not the great and mighty House of Luxo Jr.

While “Onward” doesn’t compare to “Inside Out,” “Up” or “Ratatouille,” it still manages to tell a fun – though not amazing – story helped by relatable characters. Both Ian and Barley enjoy great chemistry, but Barley is the glue that keeps this whole show together. Ian parades as the lead, but he’s far less interesting. And Pratt knows how to bring Barley’s geekdom to life with his signature vocal chops.

Perhaps the most disappointing part of “Onward” is what almost happens. Once the brothers take off, their mother follows. She soon befriends the Manticore (Octavia Spender) – imagine a winged lion with a scorpion tail – who together attempt to reach the boys before they activate a curse. Their story is charming and hilarious, but the third act forgets them. Perhaps director Dan Scanlon (“Monsters University”), who co-wrote the film with several others, will remedy this in a future film, an epic “womance” for the ages.

“Onward” proves watchable, albeit unable to truly embrace the fantasy genre in its full creative glory. But what’s here is a heartfelt story about closure following the loss of a loved one and gratitude for those family and friends who helped you through such unbearable times. That’s a good win for any film, even if “Onward” doesn’t boldly journey to realms anew.