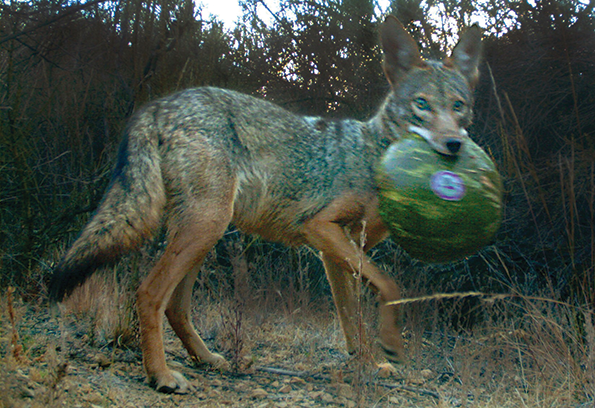 The final result of a multi-year National Park Service and California State University Northridge research project that studied coyote diets show that these urban canines are not as discriminating in regard to their culinary tastes as their suburban counterparts, according to a new study.

Using two different techniques – scat analysis and stable isotope analysis – the study found that human food resources such as garbage; ornamental fruits like ficus, loquat, grapes and palm tree fruit; and domestic cats accounted for between 60% and 75% of urban coyote diets. Cat remains were found in 20% of urban coyote scat, as compared to 4% of suburban coyote scat.

Urban coyotes still eat small animals like rabbits and rodents, but they are the ultimate opportunists. Suburban coyotes vary their eating habits by season: they typically eat natural prey in the cooler, wetter winter months and include ripe ornamental fruits in the summer months while consuming lesser amounts of human food resources than their urban counterparts.

“What this study shows us is that coyotes in Los Angeles’ urban areas are taking advantage of food sources that we don’t secure,” said ecologist Justin Brown, the lead researcher on the project for Santa Monica Mountains National Recreation Area, a unit of the National Park Service. “Whether it’s cats, fruits or garbage, the food resources that we have left out for them is why coyotes hang around. We do have some control over coyotes being here, and it’s all tied to us. If we don’t provide the food sources in our neighborhoods, they would not be living in them.”

The NPS launched the urban coyote study in May of 2015 with the goal of learning more about the basic ecology of these canids. Along with the diet aspects, the research has provided insight into how coyotes use the urban landscape.

Researchers monitor this movement by using GPS collars. Ultimately, the project will help identify how city and suburban dwellers can reduce conflict with coyotes.

Brown recommends that if residents are experiencing unwanted coyotes in their neighborhoods, the best thing to do is to work within your community to remove food resources.