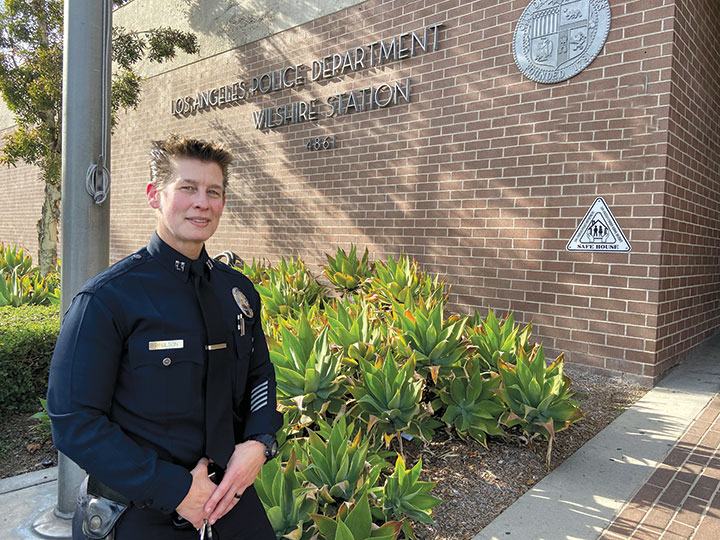 Capt. Shannon K. Paulson became the first woman to lead the Los Angeles Police Department’s Wilshire Division when she took over as commanding officer on Jan. 19.

Paulson, a 19-year veteran of the department and an Iraq War veteran, said she was excited to take the reins at the police station and is working on getting to know the personnel who work there and community stakeholders in the Wilshire area. She succeeded Capt. Timothy Nordquist, who was promoted to commander in charge of the LAPD’s Force Investigation Group after leading the Wilshire Division since last summer.

Paulson last served in the LAPD’s Security Services Division, which is responsible for security at city buildings, facilities and parks.

“I learned probably mid-December [about the new assignment]. I was thrilled,” Paulson said. “I was coming from a specialized division downtown, so I was very happy to be coming back to an operational area division with front-line patrol officers. Security Services Division is a very unique division in charge of the security and police services for all of our critical infrastructure, our government buildings, our park properties and libraries. I am one of the few command officers at the LAPD who can claim to have been the chief of the zoo police, because the L.A. Zoo is under the jurisdiction of the Security Services Division.”

Paulson, 49, grew up in Orange County but said she always wanted to work for the LAPD, which she described as the greatest law enforcement agency in the country. She has worked in 19 different positions at numerous LAPD divisions throughout her law enforcement career, but had not been previously assigned to the Wilshire Division. However, she said the Wilshire Division is where she had her first introduction to the LAPD, having taken the initial test to join the department there in 1991.

“My heart and soul has always been with the cops in the black and whites,” Paulson said. “Responding to calls every day, that direct link with the community, that basic police service that everybody thinks about as being police work. So, coming back to a patrol division and having it be in the middle of the city, the heart of the city in a very interesting dynamic division, I was very happy to be coming back.”

Paulson said her priorities are keeping crime low and addressing perceptions about crime among people living, working and visiting the Wilshire area. The division roughly stretches from the Santa Monica (10) Freeway to the Melrose area and from La Cienega Boulevard to Koreatown. It has one of the largest populations of all LAPD divisions and is a very diverse area, Paulson said.

“The area, the community, the officers here are outstanding. From the moment I was told I was coming here, I started putting out feelers. I consistently heard about the caliber of the officers, about the morale and the esprit de corps, and the work ethic of the officers, the teamwork that went on here. I think that all makes it very special here,” Paulson said. “There is also a very positive, high level of community engagement here. There is a lot of community interest, which is always nice. Having the feedback, that open line of communication and that collaboration with the community is something I feel is very important.”

Paulson said she plans to continue meeting people at neighborhood functions. She recently attended an event with the First-In Fire Foundation on emergency preparedness and met local leaders. Paulson encouraged the public to voice complaints and concerns, which enables law enforcement to identify and address problems. She said people should reach out to senior lead officers in the division and the community relations office, which can disseminate information to the appropriate personnel.

The most pressing crime in the Wilshire Division is property crime, she said, including auto burglaries and thefts. She warned people about leaving valuables in plain sight inside their vehicles and said resources have been devoted to areas like The Grove and the Melrose Avenue shopping district to address those crimes.

Paulson also stressed the importance of emergency preparedness and will focus on helping the community to be better prepared for natural disasters. She said the department has been monitoring the novel coronavirus outbreak in the United States on a daily basis and is “preparing for all possibilities.”

The new commanding officer said she often relies on her military training in her day-to-day administration and cited it as a valuable experience. She has prior active duty and reserve service with the U.S Navy and was deployed to Iraq from late 2002 through 2003, specializing in intelligence gathering. She continues her service currently by helping with training in the Department of Homeland Security.

Paulson also said she is proud to be a woman working within the command staff of the department. The Wilshire Division previously had female captains overseeing patrol operations, but Paulson is the first to serve as commanding officer. She encouraged young people, especially girls, to join the department’s cadet and junior cadet programs, similar to one in the Placentia Police Department that was a positive influence on her life growing up.

“If I do [serve as a role model], then wonderful. In today’s day and age, there is a lot of female leadership out there in our department and even in my career, we have come a long way,” Paulson said. “There is a lot of talent out there and if, in any position I am in, that serves to open somebody’s eyes to possibilities, fantastic. The department certainly provides the opportunities, and all any of us can expect is a fair opportunity. Hopefully, people will jump at that opportunity.”