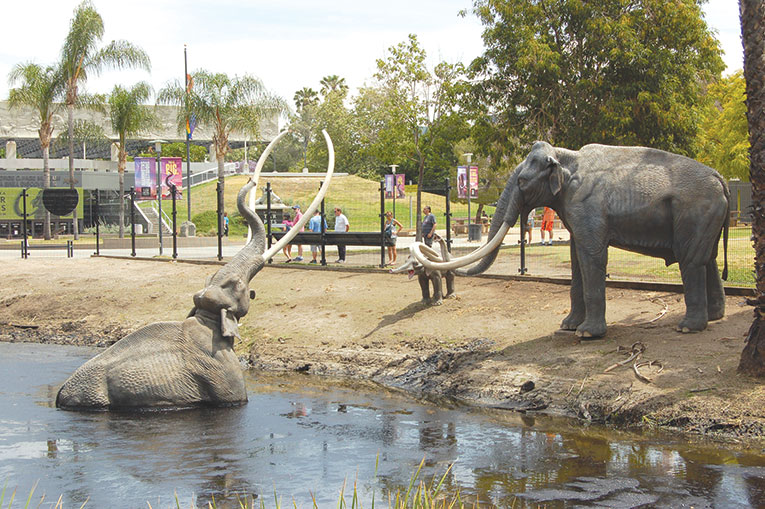 Visitors to the La Brea Tar Pits and Museum can learn about Ice Age creatures such a mammoths and mastodons. (photo by Edwin Folven)

The Natural History Museums of Los Angeles County will offer activities and discussions exploring the future, urban nature, community science and women in science and culture.

Visitors can learn about the science of scary in the exhibition “Natural History of Horror” and experience the popular Butterfly Pavilion and the new “Bugtopia” space at the Natural History Museum. They can also visit the mammoths and mastodons installation at the Museum at La Brea Tar Pits and learn more about silent film actor William Hart at the Hart Museum.

The “Natural History of Horror” is on display through April 19. The exhibition links science, history and the art of movie making by exploring scientific discoveries from early experiments in animal electricity to the excavation of King Tut’s tomb that inspired some of cinema’s most iconic monsters.

NHM’s collection features 17 objects and four early Universal monster movies – “Dracula,” “Frankenstein,” “The Mummy” and “Creature from the Black Lagoon.” Visitors will learn more about the scientific inspiration for each of these creatures through rare movie props, film footage, hands on interactives and specimens from the collection.

“Bugtopia” offers a chance to see bugs from around the world, including beetles, stick bugs, mantids and spiders. The exhibit is open to the public in the Ralph M. Parsons Discovery Center.

“Godzilla: A Living Atomic Bomb” is on view through April 19. The temporary installation in conjunction with “Natural History of Horror” focuses on the real-life nuclear tests carried out on Bikini Atoll that inspired the monster.

On March 14-15, NHM will be hosting L.A. Nature Fest, a two-day festival celebrating L.A. nature. The event is hosted in the museum’s Nature Gardens where scientists will conduct research and educators will share their stories.

The Butterfly Pavilion will open March 15 and visitors will be able to walk among butterflies in the seasonal event.

At the La Brea Tar Pits, “Mammoths and Mastodons” is on view now which provides life-sized models, hands-on interactivities and the latest discoveries and research related to these Ice Age animals.

The museum will also be offering daily screenings of “Titans of the Ice Age 3D.” The 3D-film offers an adventure to an icy world on the brink of extinction, where humans share the frozen tundra with beasts such as saber-toothed cats, dire wolves, giant sloths and mammoths.

The Hart Museum will celebrate Women’s History Month on March 21 with an open house from 11 a.m. to 4 p.m. They will examine the 19th Amendment and women in early Hollywood history who played a role in the suffrage movement.

The Natural History Museum of Los Angeles County is located at 900 Exposition Blvd., La Brea Tar Pits & Museum is located at 5801 Wilshire Blvd. and the Hart Museum at 24151 Newhall Ave.