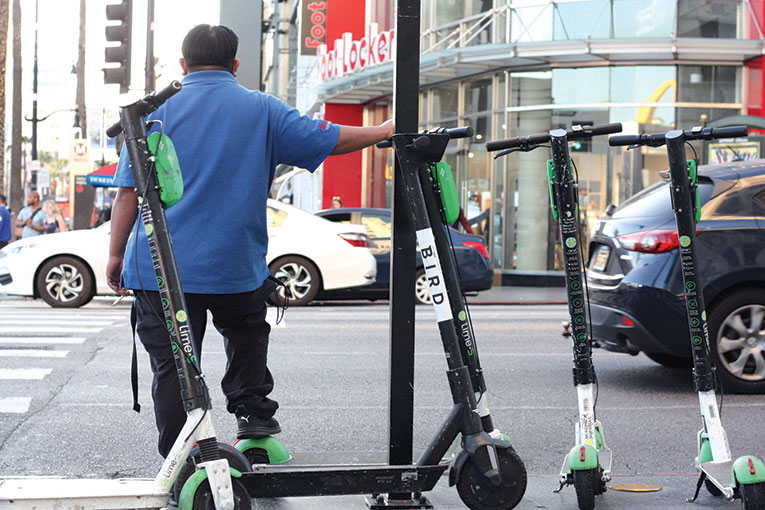 From the beginning, the Los Angeles Department of Transportation’s Dockless On-Demand Personal Mobility Pilot Program has been met with both support and disapproval.

The program was brought to Los Angeles City Council for review and an extension for another six months with recommendations to adjust how districts can better control dockless vehicles. City Council members voted 13-0 with two absent to adopt the extension on March 4.

These recommendations allow the LADOT to extend dockless operating permits for six months and instruct LADOT to report on implementing geo-fencing on sidewalk and update rules and guidelines prohibiting the termination of a ride unless the vehicle is parked in an upright position and in a physical parking or virtual zone. They also require dockless companies to periodically upload driver’s license and credit card information onto an application in order to prevent illegal use by minors and potentially create another geo-fence area from Districts 1 and 5.

“Ever since the program started I’ve gotten constituent complaints about being knocked over, especially frail seniors,” Koretz said.

He added these dockless vehicles are thrown on the gound and pedestrians could potentially trip while walking on the sidewalk. Other issues include scooters being misused by underage riders and being used by more than one rider at once.

“By and large, it has been a negative experience and while people claim that it is replacing cars, I think they are replacing feet,” Koretz said.

As of now, his request to have e-scooters and bikes geo-fenced away from his entire district has not been approved. Koretz submitted a mo­tion that still needs to go through the appropriate channels and process.

The extension of the dockless mobility program will allow the city to collect the same permit fees required in the earlier one-year permits, prorated for the period of six months. Depending on the number of vehicles permitted, the fees collected per company range between $20,000 for minimum deployments in disadvantaged communities and up to $35,000 for the maximum deployment citywide, according to a report by the LADOT.

These funds will support the ongoing management of the Dockless OnDemand Personal Mobility Pilot Program.

Colin Sweeney, public information director for the LADOT communications office, said during the extension period, LADOT will develop final recommended permit requirements and program regulations based on an analysis of data gathered during the first-year trial period.

Sweeney added that geo-fencing is an important tool to ensure vehicles do not enter areas incompatible with this mode of transportation.

“LADOT is studying these proposals and will work collaboratively with council offices to ensure the public right of way remains safe and accessible to all and that we preserve neighborhood quality of life,” Sweeny said.

However, Mark Pampanin, communications deputy and spokesman for Councilman David Ryu, 4th District, said geo-fencing can be an issue. Ryu has been a proponent of the dockless mobility program since he first called for it in City Council in October 2017.

Pampanin said that it can be a problem when City Council members say they don’t want e-scooters or other devices in their districts. He offered that companies involved with the program need to do a better job of decluttering and managing their devices. The purpose of the program is to offer a solution to transportation issues.

“The goal is to reduce transit, connect people to where they live and [bring them] closer to Metro stations,” Pampanin said.