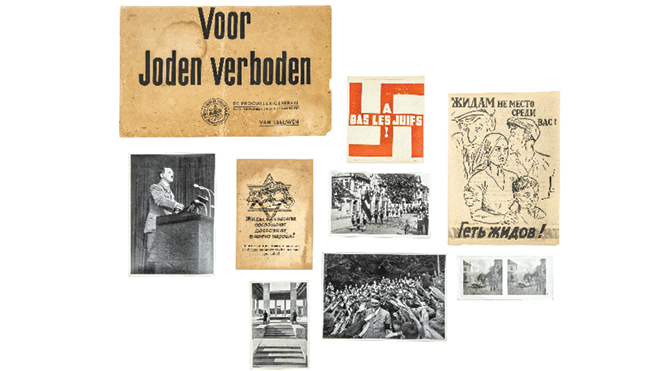 The Los Angeles Museum of the Holocaust is keeping the public connected by offering virtual programs online.

LAMOTH will present “Symbols of Hate: Nazi Terror and Deception” today, March 26, at 1 p.m. in a livestream format on Facebook. The event includes a conversation with Jordanna Gessler, vice president of education and exhibits for LAMOTH.

The swastika, the Heil Hitler salute and the SS skull and crossbones are symbols of hate that were used by the Nazis to support racist ideology, promote anti-Semitism and ostracize Jews and others. To better understand how the Nazis used the symbols, Gessler will offer a virtual tour of the “Symbols of Hate” exhibit.

Topics to be discussed include the history of symbols such as the swastika and how the Nazis appropriated them, the meaning of the Nazi rallying cry “blood and soil,” Hitler’s “cult of personality,” Nazi racial ideology and racial propaganda, and how Nazi symbols and rhetoric are used by white supremacists and neo-Nazis today.

LAMOTH also offers survivor video testimonies online that include first-hand accounts of resilience during the Holocaust. Guides for teachers and educational resources are also available.

LAMOTH is asking people to register to join the “Symbols of Hate” online event. For information, visit lamoth.org.

LAUSD closes schools through May 1, continues support for students and families